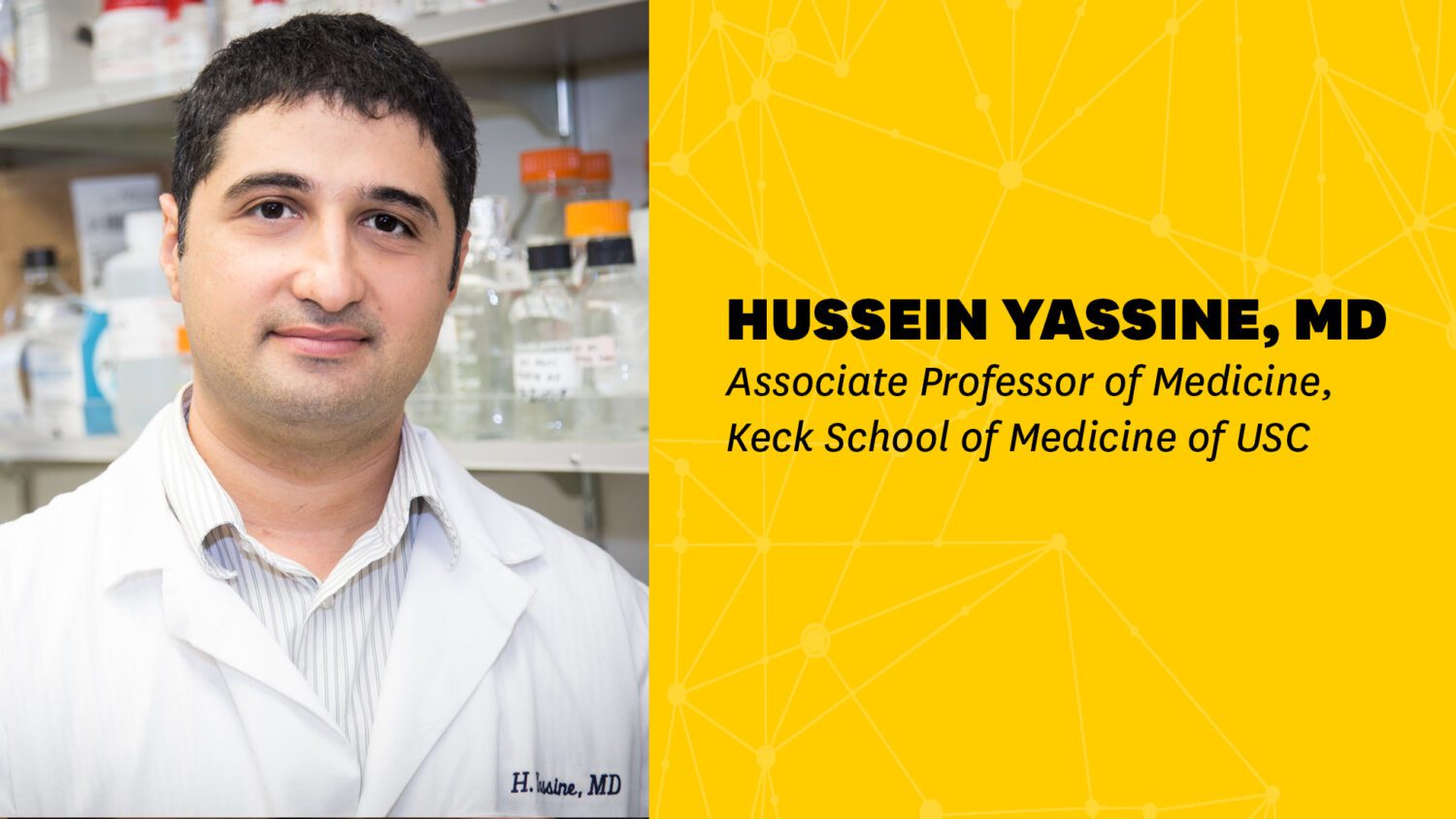 Dr. Hussein Yassine is a professor of medicine at the Keck School of Medicine at USC and is uncovering links between nutrition, genes, and risk for Alzheimer’s disease. He spoke to us about his research on APOE4, omega-3s and inflammation in the brain.

On APOE4 and Alzheimer’s risk

So APOE is a gene on chromosome 19. It exists in the population in three different forms. The two form, not very common, the three form, the most common and the four form, which makes about 20% of the population. The four form, if you get one copy from your parents, your chances of getting Alzheimer’s disease increased two to four times. If you inherit two copies, meaning you get one copy from mom and one copy from dad,  your chances of getting Alzheimer’s, or the odds ratio, goes to 12 times, meaning an APOE4 E4 homozygote, uh, 50% of those homozygotes by the age of 80 will have Alzheimer’s disease.

On the work of his lab

My lab is working to understand whether omega-3s can slow down cognitive decline in people at high risk of Alzheimer’s disease, based on APOE4. We are working on three different fronts. One, we have basic science models where we study the brains of APOE4 targeted replacement mice. We use brain imaging to study labeled DHA brain uptake in the human brain, and we do clinical trials where we give people omega-3 supplementation and look at outcomes.

On omega-3 supplements versus dietary interventions

At this point in time, we do not have high quality evidence to suggest that supplements make a difference. But we know from landmark observational cohorts, for example, the Framingham in the US, the Triple C in France, the Rotterdam in the Netherlands, and many others that people who consume at least one serving of fatty fish per week have lower risk of developing Alzheimer’s disease. In contrast trials that have involved omega-3 supplements have not panned out. And as we discussed, omega-3 supplements might be too late to be given to patients with neurodegeneration because they may not reverse neuronal death. Giving omega-3s to the general population may prove to be very difficult because the majority of people do not develop Alzheimer’s. So we need more research before we can recommend supplements. In addition, we don’t know exactly what kind of supplements we should be providing, the exact dose, the composition that duration. More research is needed to figure out those questions.

On what can people do to reduce Alzheimer’s disease risk

I think timing is key. I think if you know that you are at increased risk based on family history or APOE4 genotype  nutritional and lifestyle interventions during middle age will provide you likely the most benefit. Our research and others suggest that between the ages of 45 and 65, those at risk individuals should be on certain lifestyle modifications, whether it is at least one serving of fatty fish per week, or some good exercise regimen. We’re not talking about marathon running, maybe three times a week, 15 minutes per day is good enough. Lifestyle modifications, no smoking, reduced consumption of simple sugars to avoid complications of diabetes and obesity, increased intake of green leafy vegetables, which are enriched in polyphenols and antioxidants, good sleep, listening to music, certain forms of meditation, or in some individuals praying. And, uh, all of these factors, we know that have positive effect on mitigating or decreasing the chances of getting Alzheimer’s.

One additional factor that I did not discuss is hypertension or blood pressure control.  Blood pressure is known as a silent killer, because people have blood pressure, but they don’t know that they do so. Blood pressure control, diabetes control, cholesterol control in middle age together with these lifestyle changes can really pay dividends decades later. Once people start having symptoms and we’re talking now 60 to 80, they often come to us and they’re talking to us about omega-3 intake, about all these changes. And unfortunately at this time, the interventions are not very effective.

On the most important points  Dr. Yassine hopes people understand from  his research?

The biggest takeaway is that there is a life-course risk of Alzheimer’s disease risk in APOE4 carriers that starts shortly after birth. But mainly it takes decades before symptoms start. We know from imaging studies, between the ages of 20 all the way to 60, that the APOE4 brain is compensating to maintain cognition. Once this compensation fails, APOE4 carrier brains starts deteriorating, and you see signs of neurodegeneration and Alzheimer’s dementia. Our research emphasizes the importance of a healthy lifestyle, which includes sufficient omega-3 consumption, defined as at least one serving of fatty fish per week, lifestyle factors such as exercise, sleeping, music, meditation, family connections, combating depression, and social isolation, and social isolation is a problem now with COVID. And in addition to that, not smoking and reducing the amount of simple sugars consumed to reduce diabetes and cardiometabolic risk. Those interventions, we all know that they are critical, but our research suggests that there’s a critical time to do these interventions during middle age, to prevent the progression to Alzheimer’s at the age of 65 to 75. Once patients develop this disease, those interventions become less effective. So this is the greatest takeaway from the research we are doing.

On his message to young people

On the importance of Alzheimer’s research

Up to 25% of individuals carry APOE4. So in a room of a hundred people, 25 people will have one copy of APOE4, that’s enormous. And they make the bulk, up to 50%, of patients with Alzheimer’s. We have so many APOE4 carriers in the community, and I think more research in this area is very important to the future of mitigating or changing the risk of Alzheimer’s disease. We should start early and we should try the best we can to prevent this disease because we know once it happens, it’s very difficult to treat.

On how to reach Dr. Yassine

If anybody listening to the podcast has family members with Alzheimer’s disease, they are concerned about being an APOE4 carrier and would require more advice or perhaps participate in any of our trials. Please feel free to email me. My email is hyassine@usc.edu, and you can look me up at the USC directory website and I’m happy to help.