A unique pair of siblings have taken the phrase “Trojan Family” literally, embarking on their USC educational journey together and enriching their business partnership in the process.

Lauren Zimmerman Cook and Stephen Zimmerman completed the online Master of Arts in Gerontology program at the USC Leonard Davis School of Gerontology in December 2014 and joined their classmates for Commencement in May 2015.

Stephen and Lauren’s connection to gerontology started with the family business: Alameda, Calif. senior community and care company AEC Living. The company was founded as a single skilled nursing facility in 1971 by their parents and is now a collection of assisted living, therapy, and other services devoted to caring for older adults in Alameda and the Greater Bay Area.

“We grew up in the business,” Stephen says. “Our father focused on the business side, and our mother was a nurse who handled the care side.”

Lauren, a certified public accountant and lawyer, first assisted with accounting and other business aspects, while Stephen focused on marketing and administration. However, as they both began assuming more responsibility in the company and their father prepared to retire, they decided that they needed to deepen their gerontology knowledge beyond their own practical experience.

“We decided that since we were going to be working together [with Lauren as chief executive officer and Stephen as chief operations officer], we needed more of an academic and intellectual background in the field,” Lauren says. “With the transition to being business partners, we wanted to be coming from the same direction.”

Stephen and Lauren began researching gerontology programs and found the USC Leonard Davis M.A. in Gerontology program. The program’s online option offered both the multifaceted psychosocial and biological education the duo was looking for as well as the flexibility to continue their full-time work while fully taking part in class activities and discussions. After meeting USC Leonard Davis School Associate Dean Maria Henke as well as Davis School students at the 2013 American Society on Aging conference, Lauren and Stephen applied to the program together.

Fitting in coursework alongside their careers at AEC Living, they found their shared program having a big impact on their professional lives even before graduation.

“We’d study together at least one day per week; it was good to have someone to talk to about the readings,” Stephen says. “The program built upon our core knowledge and also helped us build our partnership.”

“We found ourselves that in our normal work, something from class would come up, and we’d have facts to back up a decision,” Lauren adds. “I’m older than Stephen, so we’ve not always been intellectually in the same place or on the same footing. [Completing the program together has] helped cement our partnership; he went from being my brother to being my business partner as well and increased our trust in each other.”

Lauren and Stephen are already applying their new gerontology education to big plans for AEC Living. Using many of the principles imparted by the MAG program, the team is currently planning a new co-housing complex in Oakland that will be designed to help seniors safely live close to community activities and amenities.

Stephen and Lauren agreed that even though the program was internet-based, it offered a wonderful connection to the Trojan Family via orientation events, message board interactions with other students, discussions with professors, and occasional trips to campus or industry sites. They added that the widespread group of online students introduced a lot of cultural and professional diversity and made for an enriching virtual classroom experience.

“Come to campus and attend orientation; you can meet people, keep in contact with some students, and build relationships even if you’re online,” Stephen says regarding his recommendations for future students. “People bring such different things to program; there’s always someone who knows more about something.”

“Everyone comes from a totally different place,” Lauren adds. “Allowing them to affect how you see the world is important.” 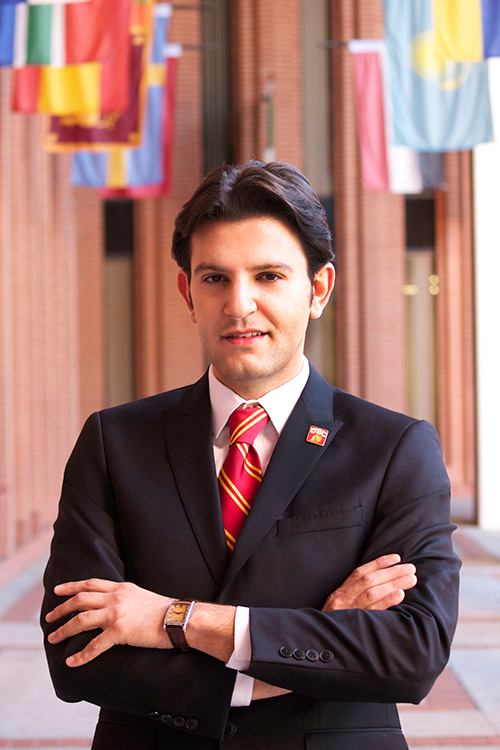 2015 USC Leonard Davis School of Gerontology Master of Science in Gerontology graduate Alexander Woodman wants to use his gerontology education to make an international impact for people of all ages.

Alexander, who was born in the USSR and relocated to California as a teenager following the Soviet Union’s collapse, has seized unique opportunities for research and outreach throughout his education. During his undergraduate years at the University of California, Los Angeles, he took part in research, student government, and honors seminars as well as volunteer work with Cedars-Sinai Medical Center.

“As a volunteer at Cedars-Sinai, I learned how to serve; increased my empathy toward older adults regardless of their race, religion, gender, and socioeconomic status; and developed a new level of understanding towards vulnerable populations,” Alexander says. “These experiences, including an interdisciplinary seminar on lifespan development and end-of-life experiences at UCLA, have deepened in my mind a unique passion of love for all mankind and genuine respect for human life, more specifically towards the elderly.”

Later, during and following his time as a Master of Public Health student at California State University, Fullerton, Alexander traveled to Southeast Asia as well as the Middle East, taking part in public health research projects dealing with obesity, infectious disease, barriers to good health behaviors, and other issues. He continued to analyze the data he collected overseas while completing his MSG at USC, working with USC Leonard Davis Clinical Assistant Professor Aaron Hagedorn.

Alexander says he chose the USC Leonard Davis School for his gerontology education simply because he wanted the best preparation for becoming a leading expert in health across the lifespan.

“USC gave me all the necessary tools to be a world-class leader within my specialty and gave me the knowledge, strength, and confidence to enter the real world and make a difference,” he says. “My explorations at USC included an examination of lifespan developmental psychology, statistics, research methods, leadership, analytical and critical thinking, and more.”

Besides continuing his involvement in research at the Davis School, Alexander also drew upon his own experience applying and attending 4 different colleges to provide mentorship to students locally and around the world who wished to transfer to USC. His contribution to international student advisement earned him a USC Academic Support Peer Achievement Award in 2014.

After graduation, Alexander continued his work in international public health. In the summer of 2015, he traveled to south of France to collect qualitative data on healthy aging in the region under the guidance of faculty from USC and Harvard University.

Alexander says that one of the most impactful and important experiences he’s had at USC is his relationships with USC Leonard Davis faculty members, Associate Dean Maria Henke, and the scholarship donors whose generosity has supported his education.

“Being surrounded by the best in the field of gerontology and public health has empowered me to take risks and aim high in my future ambitions,” he says.