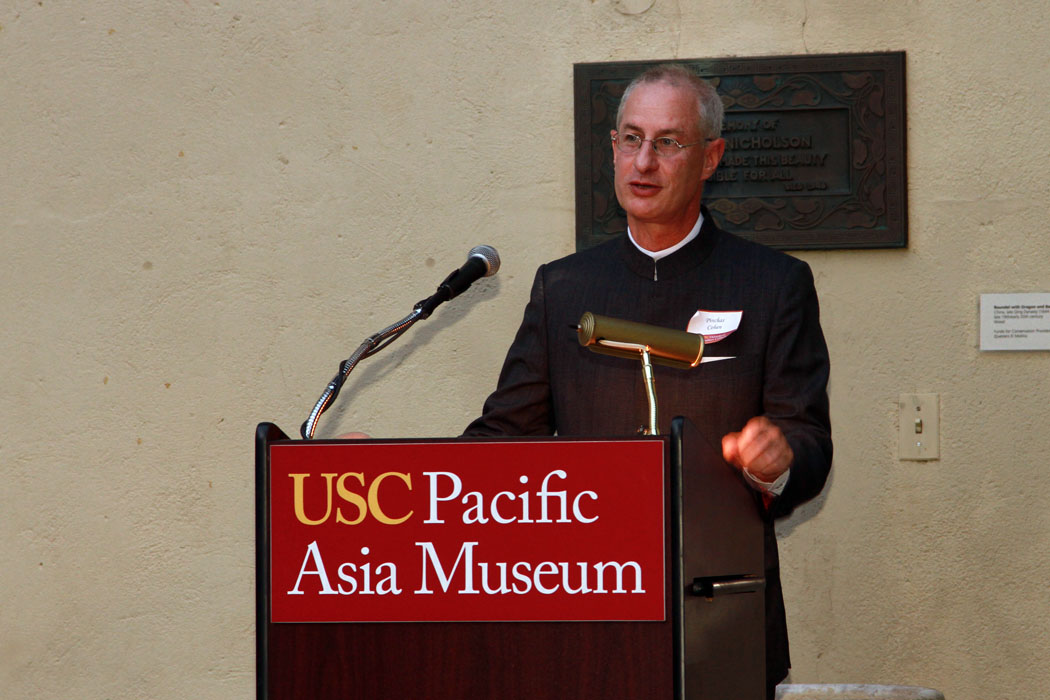 Several Asian nations have some of the most rapidly aging populations in the world, and the dramatic change in demographics is creating many new public health, economic, and societal challenges, according to several researchers from member universities of the Association of Pacific Rim Universities (APRU).

The USC Leonard Davis School of Gerontology hosted the 2014 APRU Research Symposium on Aging, which focused specifically on aging in Asia, at the Ethel Percy Andrus Gerontology Center September 14-17. The symposium’s presenters included several faculty members, postdoctoral associates, and doctoral students from the USC Leonard Davis School as well as researchers from elsewhere at USC and other APRU universities.

Following an evening welcome reception at the USC Pacific Asia Museum on September 14, the conference featured presentations on a number of issues, including health and demographics of the aging population throughout Asia; needs and adaptations for an aging world; the interplay of policy, aging and health outcomes; and the creation of an APRU population aging research hub. In addition, the USC Leonard Davis School hosted a Global Aging Data Workshop for symposium attendees on September 17, which provided participants hands-on training for accessing and using population survey data on aging from around the world.

“It is time for us to address very thoughtfully the issues raised by these different demographics… it affects every person from newborns to centenarians,” said USC Provost and Senior Vice President for Academic Affairs Elizabeth Garrett in her welcome address to symposium attendees. “The USC Leonard Davis School of Gerontology is leading the way both on campus and in the world.”

“USC has a strategic vision that includes the study of aging across the lifespan,” Cohen said.

Increases in average lifespan and declining birthrates have brought about the rapid aging seen in many nations throughout the world during the last few decades, and the effect is extremely pronounced in many Asian countries. However, getting older can bring vastly different changes for people in varying circumstances, as several large-scale cross-sectional and longitudinal studies throughout the region have shown, said University Professor and AARP Chair in Gerontology Eileen Crimmins.

With regard to aging, “my hypothesis is that major physiological changes accompanied the epidemiology revolution and the technology revolution,” said Crimmins, one of the conference’s organizers and a world-renowned expert on biodemography. “As we look across nations, people of different ages with differing access to technology and epidemiology have different physiological characteristics.”

For example, in areas where infectious diseases have become better controlled, less childhood infection and inflammation can mean less organ damage that contributes to complications later in life, while more access to technology can result in less physical labor and more obesity within the population, Crimmins said. With rapidly changing societies, older adults are “living in an environment that we did not evolve in, and we may need to adapt with changes in lifestyle and habits,” she added.

Several speakers’ presentations reiterated the idea that as Asian nations continue to age and become more centered in urban areas, challenges are evolving and becoming more entwined with the region’s social and economic policies. Public health efforts are rapidly shifting from stopping the spread of infectious diseases to helping those with physical disabilities or chronic medical conditions, such as diabetes, metabolic syndrome, and mental health issues, live more productive and independent lives as they age.

In one example of this type of complex challenge, USC Leonard Davis School Professor Jinkook Lee noted that high older adult suicide rates in Korea coincided with high rates of poverty for older adults and pension policies that benefit very few retirees. Forty percent of Koreans age 72-78 are depressed, and 49 percent of the country’s elderly live in relative poverty. Seventy-two out of every 100,000 Koreans commit suicide each year, more than triple the average rate for Organisation for Economic Co-operation and Development nations.

“The suicide rate in Korea is quite startlingly high, especially for the elderly,” Lee said. “It skyrocketed after the 1997 financial crisis.”

As the presenters and attendees discussed the challenges facing Asia’s aging population, the group also looked to the future of their efforts. Representatives of the APRU and Australia’s University of New South Wales took part in a panel discussion on the creation of an APRU aging research hub to be headquartered at UNSW. The hub would be to bring researchers together for discussions and collaboration; engage in targeted partnerships with government, industry, and international organizations; and encourage mentorship and career development for new researchers, said UNSW Pro-Vice Chancellor Fiona Docherty.

“Beauty is for all ages,” Yamano said. “A sunset is as beautiful as a sunrise.”