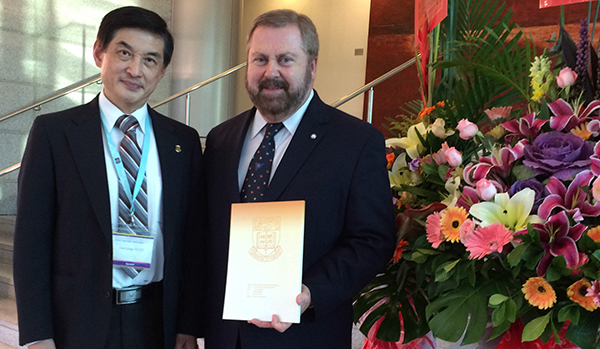 Professor Kelvin Davies, the James E. Birren Chair in Gerontology, Dean of Faculty and Research, and Director of the Andrus Gerontology Center at the USC Leonard Davis School of Gerontology, was recently recognized with an honorary doctorate from Guangzhou University and honorary professorships from the University of Hong Kong and Shenzhen Clinical Medical College.

USC Leonard Davis School of Gerontology Professor Kelvin Davies received an honorary doctorate from Guangzhou University as well as honorary professorships from the University of Hong Kong and Shenzhen Clinical Medical College as part of a visit to China and Hong Kong in November.

Davies is widely acknowledged as a leader in the field of free radicals, oxidative stress, and redox biology, and he is a pioneer in researching the roles of gene expression and signal transduction mechanisms in stress adaptation and how such protective systems gradually fail in humans as they age. During the trip, he was also the keynote speaker at the 2nd Chinese International Conference on Free Radical Research in Hong Kong.

Davies delivered his acceptance speeches and keynote lecture in Hong Kong and Shenzhen on the roles of the transcription factors Nrf2, Nrf1, and Bach1 in regulating gene expression during cells’ adaptation to oxidative stress. In the remarks, he highlighted the key roles of the proteasome—a protein complex within cells that breaks down damaged or unnecessary proteins—and the Lon protease enzyme in such adaptive responses. He also discussed the potential mechanisms by which the failure of such factors may contribute to both the aging process and to various diseases of aging.

“It is a wonderful experience to be recognized by one’s peers,” Davies said. “As the fastest-growing world region for the scientific enterprise, it was especially exciting to receive this kind of acknowledgement from colleagues in mainland China and Hong Kong.”