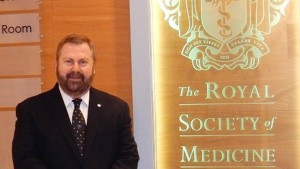 USC Leonard Davis School of Gerontology Professor Kelvin J. A. Davies was recently elected as a Fellow of the Royal Society of Medicine in the United Kingdom.

Davies is currently the James E. Birren Professor of the Biology of Aging at USC’s Davis School of Gerontology, where he is also Dean of Faculty and Director of the Andrus Gerontology Center. Davies holds a joint appointment as Professor of Molecular & Computational Biology in Dornsife College of Letters, Arts, and Sciences. He has previously held tenured appointments in both the Keck School of Medicine (Biochemistry) and the School of Pharmacy at USC.

Davies described himself as being “delighted and honored beyond belief” by his election as a Fellow of the Royal Society of Medicine.

“The fields of free radical biology and medicine and the biology of aging, in which I have worked for the past 30-plus years, have really started making significant contributions to human knowledge and to improving health and vitality in our later years,” he said. “I am proud to have been a small part of the advances we have made in these areas.”

Kelvin Davies, a citizen of both the U.K. and the U.S., is a fellow of seven other national or international societies, including the American Association for the Advancement of Science, the Gerontological Society of America, the Society for Free Radical Biology & Medicine, and the Royal Institution (London). He has been awarded honorary doctoral degrees by six universities in Europe, South America, and China, and in 2012 was knighted as a Chevalier de l’Ordre National du Mérite de France (Knight, National Order of Merit of France) by then-President Nicolas Sarkozy for his contributions to science and international cooperation.

Davies’ early education took place in England, after which he earned M.S. and PhD degrees from the Universities of Wisconsin and California, Berkeley. Following postdoctoral training and a junior faculty position at Harvard University, Davies joined the USC Schools of Medicine and Pharmacy, where he earned tenure. He left USC in 1989 to become the Chairman and John A. Muntz University Professor of the Department of Biochemistry & Molecular Biology, and Distinguished Professor of Molecular Medicine in the Department of Medicine, at The Albany Medical College in NY. In 1996 Davies returned to USC to take up his current positions in the Davis School and the College, at the USC University Park Campus.

About the Royal Society of Medicine

The Royal Society of Medicine was established in 1805 as The Medical and Chirurgical Society of London, meeting in two rooms in barristers’ chambers at Gray’s Inn and then moving to Lincoln’s Inn Fields where it stayed for 25 years. The name was changed to the Royal Medical and Chirurgical Society of London in 1834 when the Society was granted a Royal Charter by His Majesty King William IV. The Royal Medical and Chirurgical Society of London eventually subsumed seventeen other medical specialist societies and, with a supplementary Royal Charter granted by Edward VII, became the Royal Society of Medicine in 1907. The objects of the Society laid down by the 1834 Charter are the cultivation and promotion of Physic and Surgery and of the Branches of Science connected with them. The Supplementary Charter of 1907 empowered the Society to create Sections for the cultivation and promotion of any branch of medicine or any science connected with, or allied to, medicine. In 1910 the Society acquired the site on the corner of Wimpole Street and Henrietta Place, which was opened by King George V and Queen Mary in May 1912.