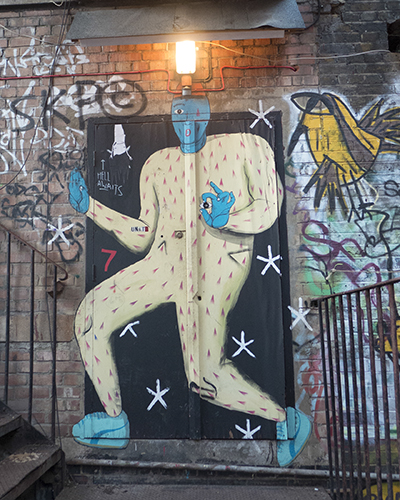 At first glance, it’s hard to tell that the photos of Bill Wishner’s “I Don’t Explain” collection aren’t, in fact, paintings themselves. But looking beyond the colorful collages of painted characters, scrawled phrases, and peeling poster images reveals the bricks, wires, lights, and other telltale features of the photos’ urban backdrops.

Focusing on the many layered pieces of wall art in its specific context rather than documenting a specific work, Wishner has created art that’s uniquely his as a result. Each photo captures something striking yet fragile, juxtaposed with the human habitats that will ensure its eventual loss.

“This is my view of contemporary wall art that is created largely unintentionally by many people in the urban environment,” he says. “What’s painted on a wall today will be taken off the wall at some point in time; it’s not permanent. The art on the walls that I photograph will absolutely disappear; it’s guaranteed a short life. Walls I photographed in L.A., for instance, are gone. They’re whitewashed, or things have been layered on.”

As evidenced by the exhibit’s title, Wishner has purposefully avoided attaching explanations to the pieces. With so much mystery already an intrinsic part of each photo—who created each component, and what did they want to say with them? Who lives or works behind the wall, and was the art made with or without their permission?—he says it’s up to each observer to decide what it means to them.

“I recognize that this will be a hard sell,” he admits. “Will this stand up? I don’t know, no one knows. But that’s the point—no one creates things that have been created already; you want to go after things that have never been seen. I wanted to give people a chance to look at these urban walls and focus on things that are artful and not be concerned with whether it’s necessarily vandalism or crimes or if they’ll disappear. It is today what it is.”

“I’d rather people wonder what was there before, who put it up. Everybody looks at it and says ‘this reminds me of’ something different,” he says. “If you’re going to create art, it’s got to be a challenge; it’s got to push people to see our community and our environment in a different way.”

With medicine as his primary career, Wishner considers art not a hobby but his “secondary occupation;” he’s dabbled in many art forms, including sculpture and writing, but photography has been his chief medium for the last 30 years. He focused largely on stage portraits of jazz musicians for 25 years before beginning his search for a new artistic direction—and stumbling into the world of urban wall art—when he retired from full-time medical practice and industry work. He remains a clinical professor of medicine at the Keck School of Medicine of USC, helping to teach medical ethics and giving a seminar every year on how physicians are portrayed in the media.

At age 74, having navigated these professional and artistic transitions, he says he wants people to know that age doesn’t preclude creativity and that someone can become an artist at any point in their life. However, he also acknowledges the difficulties facing many older artists, especially those who found their artistic path later in life or have made a marked transition in subject matter.

“Photography is ageless; you can’t tell if a picture was taken by someone [who is] 90 or 20. [But] I think that there are challenges that a young artist will not face,” he says. “Elderly artists are held not in contempt but in ‘geriatric hostage,’ I call it. Time is not on our side, and the opportunities for recognition frequently are not there for older artists unless you’ve been established while younger… if I truly believe in my art, I really want people to see it now.”

Beyond the hard work he’s poured into his own art, Wishner has channeled his artistic fervor into furthering photography discussion as well as supporting photographers in his neighborhood. In 2007 he founded the f8 Pasadena Salon, a weekly gathering modeled after classical salon discussion groups, to foster conversations regarding the deeper aesthetics and artistry of photography. Five years later he created Pasadena Photography Arts, a project of the Pasadena Arts Council/EMERGE program dedicated to promoting photography on the east side of L.A. while helping emerging photographers as they start their careers. 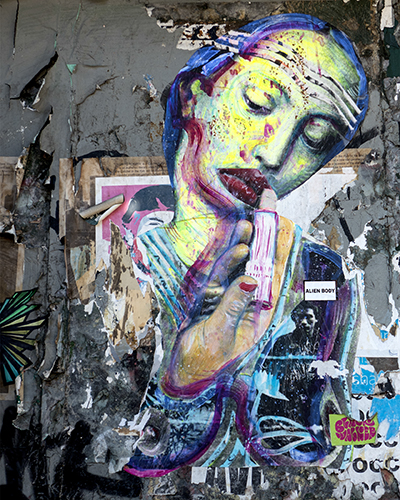 “This is a passion,” he says. “That passion doesn’t only extend to my own art; it goes towards helping other people at any age become successful artists and carry on intellectual discussions on photography.”

A husband, father of four, and grandfather of six, Wishner attributes his successful years as a physician, his fulfilling artistic career, and his rewarding work in the community to the support and love of his family over the decades.

“My life as an artist can only be fostered by my partner and my family; these are the folks who really get the credit for everything. I’ve had lots of opportunities to do different things, and I’m very grateful,” he says. “Both [my wife] Kathy and I are physicians and have had great careers. I’ve had a chance to teach, to be in the arts, to raise a family. It makes me look back and say, ‘Wow, how did that happen?’”

Selections from “I Don’t Explain” are on display at the Sophie Davis Art Gallery and will be featured as part of the 2015 USC Leonard Davis School of Gerontology Scholarship Dinner on Friday, April 24. For more information and to RSVP, please visit https://gero.usc.edu/scholardinner.

The Sophie Davis Art Gallery was established by a generous donation from Alan Davis, son of the USC Leonard Davis School of Gerontology’s namesake, to house rotating exhibits that illuminate topics related to aging across the life course. It is open to the public during the School’s operating hours. The Sophie Davis Art Gallery is a key feature of the Davis School’s Creativity and Aging Initiative, which was launched in 2013 to engage USC faculty, staff, students, and community members; host events to celebrate and explore the achievements of older artists, musicians, writers, actors, and dancers; as well as link to research and academics. https://gero.usc.edu/creativeaging