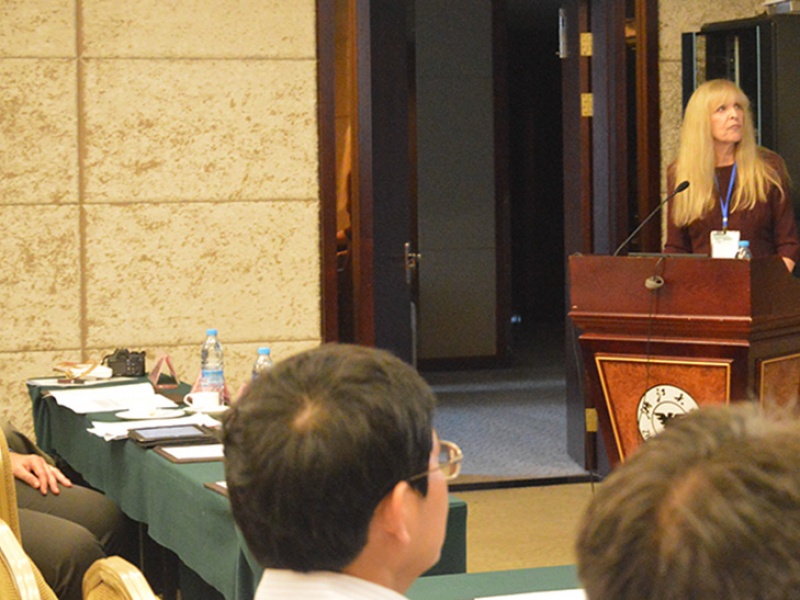 USC Leonard Davis School of Gerontology alumna Patricia O’Neill’s remarkable educational journey—now spanning six degrees (four of them from USC) and three continents—has taken her around the globe and throughout several fields. Her wide-ranging curiosity is now focused on gerontology and Asia; specifically, how Chinese daughters work to strike a balance between traditional obligations to aging parents and modern expectations and opportunities.

This spring, the 2008 Master of Science in Gerontology graduate completed her doctoral dissertation, “Chinese daughters negotiating contemporary norms and traditional filial obligation,” at the University of Oxford, working in the Department of Sociology, Oxford Institute of Population Ageing, and St. Antony’s College. Her own familial and professional circumstances inspired her both to learn more about aging, O’Neill says.

“My father had dementia, my mother had died, and I am an only child who suddenly had to deal with my father’s medical issues as well as an elder abuse situation he got himself into,” she says. “This spawned my interest in gerontology and motivated me to return to USC to pursue the MSG.”

Prior to arriving at the Davis School in 2006, O’Neill had worked as a business, research, and appellate lawyer for many years. During this time, she spent a considerable amount of time in Asia, quickly falling in love with Chinese culture in particular.

“I became very interested in the traditional and contemporary roles of daughters, whose circumstances I found very similar to my own,” she says. “I wanted to know how changing norms, particularly education and professional employment, might be affecting the historical caregiving paradigm.”

While at Oxford, her fieldwork as well as several invitations to serve as lecturer and delegate at conferences allowed her to spend a great deal of time in Asia, including China, Singapore, and Malaysia. Her doctoral research has examined the changing roles and choices of Chinese daughters, who in the past traditionally stayed at home to care for aging parents and in-laws but are now often well educated, employed, and self-sufficient.

“[Daughters in China] may be unavailable or unwilling to carry out filial duties in the same way they did in the past,” O’Neill says. “The purpose of this research is to investigate how the lives, attitudes and values of Chinese daughters have changed, what this means for the care and well-being of their ageing parents and in-laws, and what influences drive modern Chinese women to act as they do.”

Following graduation, O’Neill plans to take time to write and to continue to research aging in Asia.

While at the Davis School, O’Neill worked with Mary Pickford Professor of Gerontology Kathleen Wilber as a member of the Los Angeles County Elder Abuse Forensic Center team.

“When Patricia was here at the Davis School, she helped launch the Forensic Center evaluation and at the same time conducted a cutting edge evaluation of legal services in California,” Wilber said. “I am very excited and proud of her; she has and will continue to accomplish great things.”