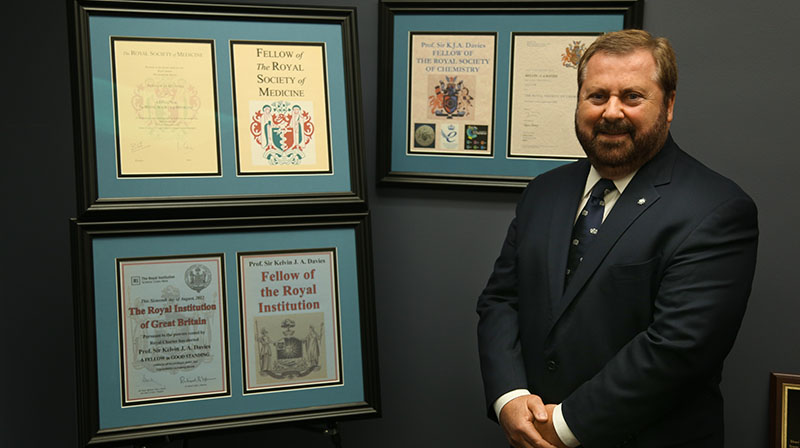 Davies serves as the James E. Birren Professor, Dean of Faculty and Research and Director of the Ethel Percy Andrus Gerontology Center at the Davis School; Director of the USC Free Radical Institute and Professor of Molecular and Computational Biology in the Department of Biological Sciences of the Dornsife College of Letters, Arts, and Sciences. He and Distinguished Professor of Chemistry Arieh Warshel are USC’s two RSC Fellows.

Now entitled to add the post-nominal titles FRI, FRSM and FRSC after his name, Davies said he was “thrilled” to be elected as an RSC Fellow.

“To be honest, I’m really a biochemist more than anything else, and although physical chemistry always made perfect sense to me, I’m afraid that I found organic chemistry to be one of the great mysteries of life!” Davies said.

Kelvin Davies’ research is focused on molecular pathways by which cells, organisms and people adapt to chemical stresses such as oxidation. Davies coined the term “Adaptive Homeostasis” to explain how our normal range of abilities (the homeostatic range) can be greatly expanded for short periods of time, in order to cope with stresses, by temporarily changing both the types of genes that are being expressed and the amount of their expression. Unfortunately, adaptive homeostasis declines or even fails as we grow older, predisposing us to a multitude of debilitating degenerative diseases. Davies is mapping the mechanism(s) by which this occurs and looking for methods to delay or even prevent the decline.

No stranger to academic success, Davies is already a fellow of seven other national and international societies and academies; the recipient of seven honorary doctorates from universities in Europe, Asia and the Americas and the winner of numerous medals, prizes and lectureships. In 2012, he was knighted as a Chevalier de l’Ordre National du Mérite de France (Knight of the National Order of Merit of France) by French President Nicolas Sarkozy for his services to science, humanity and international cooperation.

About the Royal Society of Chemistry

In 1841, 77 scientists—including academics, physicians, manufacturers and entrepreneurs—formed the Chemical Society of London, with dialysis inventor Thomas Graham as their first president. Seven years later, Queen Victoria granted a Royal Charter to the Society, confirming its purpose of “the general advancement of Chemical Science.” In 1980 the Chemical Society of London, the Society for Analytical Chemistry, the Royal Institute of Chemistry and the Faraday Society merged to form the Royal Society of Chemistry, which was granted a new Royal Charter in 1980 by Queen Elizabeth II.

Now 170 years old and headquartered in London and Cambridge, the RSC also has US offices in New York and Philadelphia, as well as other offices in São Paulo, Brazil; Beijing and Shanghai, China; Berlin, Germany; Bangalore, India and Tokyo, Japan. There are now over 51,000 RSC members across the world (5 percent of which are in the US), and the RSC has a reputation as an influential champion for the chemical sciences. Fewer than 2,000 living members are elected to Fellowship in the RSC at any time.