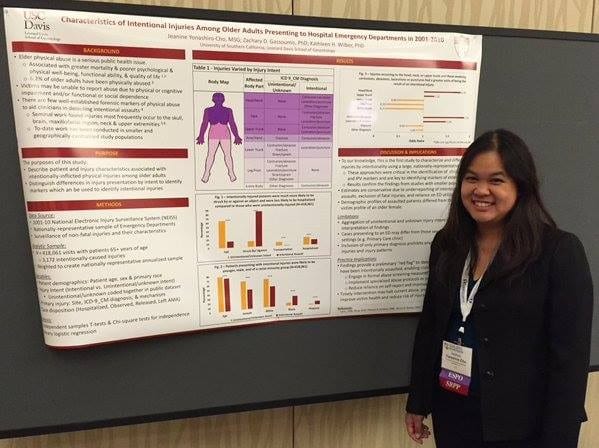 “I’m so honored to be recognized by the SRPP section and so blessed and thankful for to work with Drs. Kathleen Wilber and Zachary Gassoumis,” Yonashiro-Cho said. “I am also very excited for the opportunity to share this research with others who might not otherwise stop to think about elder abuse or neglect.”

Yonashiro-Cho said that the need for providers to recognize abuse is stark. The most recent national estimates say one in 10 older adults has experienced abuse within the past year, with over 90% of these cases never being reported to a legal or social services agency, she explained.

“Our research provides some insight that may help practitioners better recognize when an injury might have occurred through abuse, whether or not an older adult ever reports it as abuse,” she said. “This is especially critical in older adult populations because unlike younger victims, elderly victims may be physically or cognitively unable to report the abuse and might otherwise never receive any support or intervention.

Yonashiro-Cho said she plans to continue exploring the issue of elder abuse and hopes to identify additional ways to quickly and accurately recognize abuse and its effects.

“I would love to continue looking at forensic markers of abuse and to continue developing tools which practitioners, family members, and friends can use to assess whether an older adult might have been physically abused or assaulted,” she said. “Additionally, I hope to begin looking at the health consequences of abuse to identify how experiencing an assault might influence the long-term health of older adults.”