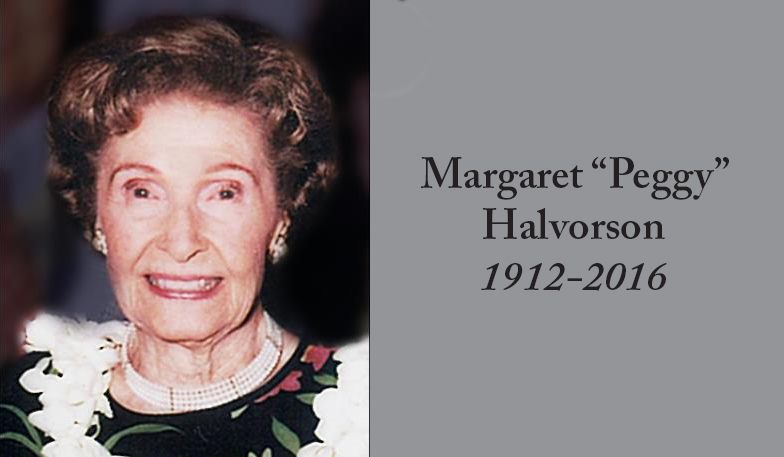 Margaret A. Colyear “Peggy” Halvorson, a longtime supporter of the University of Southern California and former member of the USC Leonard Davis School of Gerontology Board of Councilors, passed away February 2, 2016 in Los Angeles. She was 103.

Halvorson was born October 29, 1912 in Baltimore, Maryland. Following her graduation from Beverly Hills High School in 1929, she attended USC and became a loyal alumna and supporter of the university. She first became involved with the Davis School of Gerontology in the 1980s after meeting several Ethel Percy Andrus Gerontology Center members on a trip with fellow Trojans. Soon thereafter, she was appointed to the Andrus Center’s Associates Board.

In 1994, Halvorson established the Margaret A. Halvorson Emergency Fund with a generous gift to the Davis School. This innovative fund, which is still in operation today, was created to help students complete their degrees in gerontology by assisting in ways not usually covered by other means of support, whether by allowing a student to buy books or pay for other unanticipated education-related expenses.

In 1998, Halvorson was elected to the Davis School Board of Councilors, on which she served until 2009. The following year, she was the recipient of the 1999 Davis School Dean’s Medallion, and in 2004 she was honored with the Outstanding Philanthropist Award at the Association of Fundraising Professionals’ annual National Philanthropy Day. She was also a member of the USC Associates.

“You have to give back,” Halvorson said in a 1999 Davis School interview. “Helping others, it goes right back to the basics.”

Alumni Featured In Memoriam No Comments