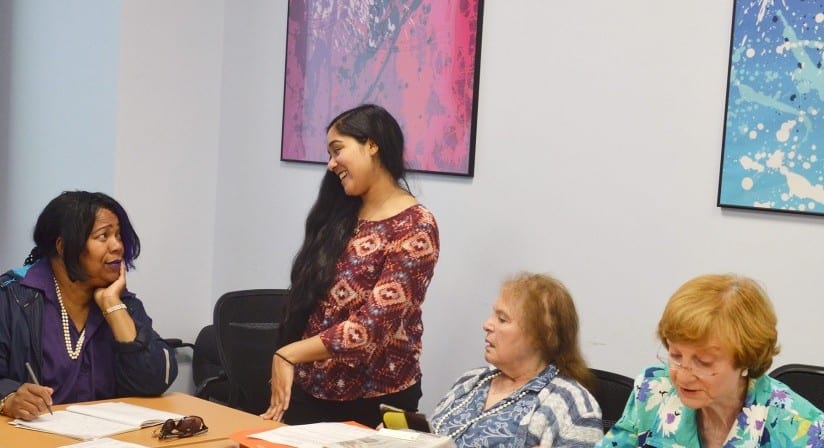 Being around older adults “makes me feel happy,” said USC Leonard Davis School of Gerontology student Shivanti Kariyawasam, who hopes to use her gerontology education to return the favor and help older adults improve their well-being.

Kariyawasam will graduate this spring with her Bachelor of Science in Human Development and Aging (Health Science track) and a Master of Science in Gerontology as part of the school’s progressive degree option. Kariyawasam’s beloved grandmother, who lived with her as she grew up in Cerritos, was a big part of what led her to gerontology.

“I was very close to my grandma growing up,” she said. “I used to always talk about her during meetings with my high school guidance counselor. One day, one of my teachers asked me if I had ever heard of gerontology and mentioned that USC had a program for it.”

Even before she got to college, Kariyawasam and her family faced difficult decisions that she would go on to learn more about in her USC studies. While she was in high school, a medical issue forced Kariyawasam and her parents to make tough decisions about whether her grandmother could safely remain at home.

“My parents were considering putting her in a home, but I was very against it; she was like my best friend! My parents decided to keep her at home on weekends,” she recalled. “I thought, ‘If my family is having this predicament, I’m pretty sure other families are going through the same thing.’”

As Kariyawasam began exploring gerontology more often, she volunteered at facilities for intellectually disabled adults and seniors. Greatly enjoying the time she spent helping older adults with art projects and other activities, she said she realized that gerontology’s all-encompassing nature could indulge her many interests, from biology and psychology to international relations and history.

When she applied to college, USC Leonard Davis stood out as a place where she could combine her interests in the social science and physical science aspects of aging — and it was also a school where she could remain close enough to see her grandmother every weekend.

“My grandma prayed every day from December to March until I got my acceptance letter,” Kariyawasam said.

At USC, she’s taken advantage of many learning and leadership opportunities. Since her sophomore year, she’s worked in the laboratory of USC Leonard Davis Assistant Professor Tara Gruenewald, which has given her the chance to explore the connections between biology and psychology. With Gruenewald’s guidance, she was able to conduct and present independent research as an undergraduate.

“[Gruenewald] has exposed me to lots of different things that I wouldn’t have encountered from just my classes. I have developed more critical thinking skills and learned to apply what I’ve learned in my gerontology classes.”

When Associate Dean Maria Henke asked students to revitalize the school’s Student Gerontology Association (SGA), Kariyawasam took the opportunity to shape the group into a community-building force within the school. She is currently president of the SGA and has helped develop successful career and networking activities, service opportunities and social events for the student body.

“I saw SGA as a way to make sure that after leaving the school, students still feel like they’re part of the Davis School family,” she said.

After graduation, Kariyawasam hopes to attend professional school and eventually work in a health care setting, where she can help geriatric patients. She encourages future students to seize the chances that the school provides, from its small size and caring faculty to its many research and service opportunities.

“Take advantage of being able to talk to your professors, especially as an undergrad,” she emphasized. “Constantly look for opportunities to learn, and listen to any advice they give you.”

Knowledge about aging is valuable for everyone, even those who are not gerontology majors, Kariyawasam added.

“I think everyone can benefit from taking a gerontology class,” she said. “You’ll have knowledge of a necessary subject. It will give you a greater understanding of the world.”

Above: Kariyawasam leads a meeting of the Andrus Center volunteers, a group of older adults who work with Davis School students, on March 9, 2016.