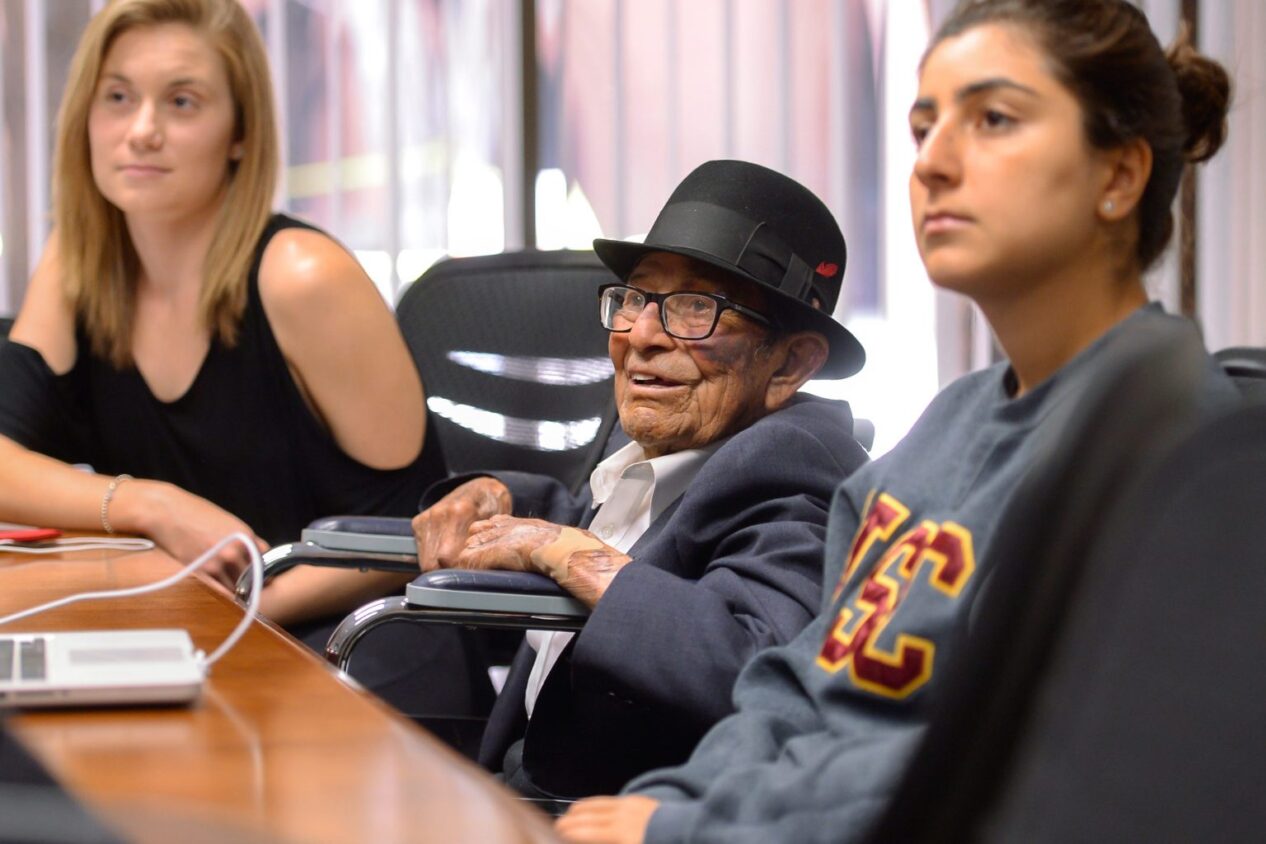 A Degree Nearly 70 Years in the Making

Home » A Degree Nearly 70 Years in the Making 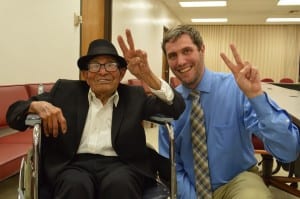 This semester, one Trojan has taken the adage “better late than never” to a whole new level.

On May 13, 96-year-old World War II veteran Alfonso Gonzales will become the oldest graduate in USC history as he receives his Bachelor of Science degree in zoology, which he began in 1947 as the first person in his family to go to college.

For more than six decades, Gonzales thought that he was already a graduate of what is now the USC Dornsife College of Letters, Arts and Sciences, he said. His name had been included on the list of students eligible to participate in commencement exercises in 1953, but he hadn’t taken part in the ceremony because of work obligations. But when his family members approached the university about getting a copy of his diploma, they were met with surprising news.

However, Gonzales wasn’t about to let technicalities—neither his missing credit nor the fact that the zoology major no longer exists at USC—stop him from getting the degree he had worked so hard for decades earlier, said his nephew, Mario Gonzales.

“He just said, ‘I’ll do whatever USC says I need to do to get my degree,’” he recalled. 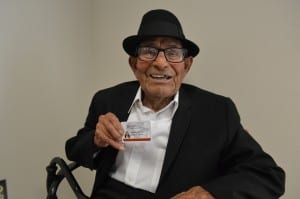 Once he learned of Gonzales’ unique situation, USC Registrar Frank Chang approached the USC Leonard Davis School of Gerontology about using their expertise in working with older adults to help Gonzales finish his bachelor’s program. He asked if a one-unit course—designed to be as substantive as any other USC course but tailored for Gonzales’ life experiences and needs as an older student—could be created.

“Mr. Gonzales’ situation is unique in that he only needs one unit to fulfill degree requirements, but one unit requires completion of several hours of instruction with a faculty member,” Chang said. “I called Mr. Gonzales at home to ask if he felt up to the challenge. His determination was so impressive that I knew that given the chance, Mr. Gonzales would meet all requirements.”

Leonard Davis School Instructional Assistant Professor Aaron Hagedorn answered the call, crafting an independent study course examining autobiographies and how the stories people tell others about themselves change throughout the lifespan. Throughout the spring 2016 semester, Hagedorn met with Gonzales weekly, gave him reading and video assignments and arranged his visits to other gerontology classes.

Hagedorn said Gonzales has been a dedicated, diligent student who was always prepared and enthusiastic for class and added that the experience of working with Gonzales has improved his own understanding of older adult learners.

“Teaching Alfonso was a great demonstration of the principles of andragogy, also known as adult learning theory, in creating a learning environment that was based on his life experiences,” he said. “He is highly motivated by reminiscing and loves to read biographies on his own. He knew a lot about Abraham Lincoln and Benjamin Franklin, so we related their biographies to his. All 3 devoted tremendous energy to their work, and their life story is deeply impacted by their work experience.”

Pinchas Cohen, dean of the Leonard Davis School, praised Gonzales’ commitment to finishing his education and willingness to be a role model for lifelong learning.

“We at the USC Leonard Davis School of Gerontology are proud to have helped [Gonzales] finish his degree,” Cohen said. “What he’s doing is setting an incredibly positive example for other older adults in America and around the world. He embodies the fact that learning opportunities never stop; people can develop new skills and grow at any age.”

Chang added that Gonzales has been an inspiration to all members of the Trojan Family.

“He is a living testament that where there is a will, there is a way,” he said. “It fills my heart with joy that he will soon transition in the Trojan Family from student to alum.”

To mark the occasion, USC’s zoology major has been reopened to allow Gonzales to receive the original degree he began working toward so long ago.

“Alfonso Gonzales serves as a wonderful inspiration to everyone who believes it is never too late to pursue education,” said Dani Byrd, interim dean of the USC Dornsife College of Letters, Arts and Sciences. “I am thrilled that USC’s Registrar Frank Chang helped coordinate this incredible feat and proud that Mr. Gonzales’s Zoology B.S. degree will be issued by USC Dornsife. On behalf of everyone at the university, we wish him well-deserved congratulations.” 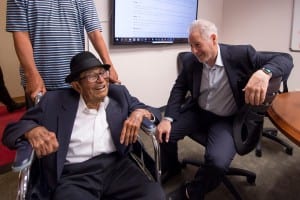 Gonzales is currently finishing his final assignment for class, a short senior thesis paper exploring several turning points in his life. His humble demeanor belies the extraordinary determination, hard work and devotion to his family he’s exhibited throughout his life.

Born January 23, 1920 in Lompoc, Calif., Gonzales spent most of his youth in Hermosa Beach, and he still resides there in the house he’s lived in since 1938. At USC, he shared several fascinating stories from his youth, including driving his first car—a Ford Model A—and meeting artist Simon Rodia in 1932 as he collected scrap tile for what would become the Watts Towers.

He graduated from Redondo Union High School in 1939, and in November 1942 he joined the Navy, where he received hospital training and first got interested in pursuing medicine as a career. Transferring to the Marine Corps in 1944, he received further training in field medicine, which he used when he was deployed to Okinawa, Japan in April 1945. He treated wounded on the battlefield as part of World War II’s largest amphibious assault in the Pacific.

“I was just an ordinary GI; I wasn’t a hero or anything,” he said of his time in the military—despite the disagreement that might have come from the many wounded individuals he treated.

Discharged in November 1945 at the rank of pharmacist’s mate second class, Gonzales returned to Southern California and began pursuing his higher education goals. He attended Compton Junior College (now El Camino College Compton Center) before transferring to USC. Gonzales majored in zoology as part of his initial plan to eventually apply to medical school, and he remembers in detail the science courses he took as well as other classes.

“I took embryology, comparative anatomy, zoology, physiology and botany. I loved comparative anatomy; I learned how much of an animal we are and where we originally came from, how Mother Nature created us,” Gonzales said. “I also took a class on the political history of California and an ethics class.”

But like many students, his career goals changed direction during his time at USC. During his final year at USC in 1953, he went into the soil business and started Compo-Loam, providing a proprietary planting mix of soil, compost and other nutrients to homes and nurseries.

“I had decided on the pre-med major because that’s what I did in the service. But after the war, I kind of changed my mind about being a medical doctor,” Gonzales said regarding his decision to change his professional aims, start his innovative business and apply his science knowledge to soil. “Nobody else was doing it. I felt like I was really achieving something.”

Despite not going into medicine, he added his USC education was still very applicable to his work: “Botany was very important, and I learned about the chemical and the physical [aspects] of soil. [The classes at USC] did help me.”

Gonzales ran Compo-Loam for 55 years until he retired in 2008 at age 88. Over the decades, the family business grew, and he became so knowledgeable about soil in the Southbay that he could eventually identify where a soil sample was collected just by looking at it.

Now, Gonzales is the eldest member of a family with five living generations; the youngest member of the family is his two-year-old great-great-great niece, Iris. While he never married nor had children, his intelligence and determination have been inspirational forces for extended family members, said Gonzales’ grandniece Dorinda Geddes.

“My uncle has always been a very remarkable and special man,” she said. “He is a role model for all of us.”

Mario Gonzales said the independent study course has been wonderful not only for his uncle but also for the rest of the family as Gonzales shares more memories and prepares his short autobiography.

“Getting Uncle’s history is really important,” he said. “We can carry it on to the next generation.” 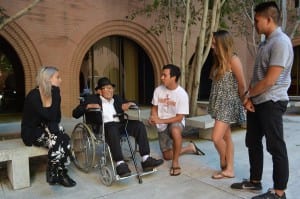 A Trojan then and now

When he returned to USC this year, Gonzales took a tour of the campus with Hagedorn. Much has changed over the last few decades, but he said he was able to recognize several landmarks, including Tommy Trojan, the animals on the façade of the Hancock building, Doheny Library and more.

He’s enjoyed telling the students he meets about how USC and its student body looked in the late ‘40s and early ‘50s. During his visits to campus, he likes to wear a coat and hat that he wore during his earlier days at the university; he added that a tie was also required for men back then, while women had to wear skirts well below the knee. He also brought his original leather school bag, though he admits he lost the key sometime in the 60-plus years since he first used it.

In addition, Gonzales has entertained students with tales of campus pranks, though he’s adamantly maintained that as a commuter student who wasn’t on campus as often as others, he didn’t take part in any of the mischief himself.

One of the changes he has noticed the most is the dramatically higher number of women on campus, he said.

“There weren’t too many girls here before,” he told a group of female students during one visit. “I’m glad to see all of you here.”

Following that comment, he asked Hagedorn whether women now make up a majority of the student body. When Hagedorn replied in the affirmative, Gonzales grinned, nodded and lifted a “Fight On” gesture into the air.

As he visited classrooms and chatted with Leonard Davis School students several decades his junior, Gonzales has spoken about his health, lifestyle, his family’s history of longevity and outlook on life.

“I did make one mistake in life: I smoked too much. My advice is don’t smoke,” said Gonzales, who kicked his tobacco habit in 1980 after 40 years of smoking but was diagnosed with chronic obstructive pulmonary disorder in 2014 at age 94. Remarkably, he has no other major health issues, still exercises regularly, lived alone as recently as 2013 and still maintains a very sharp mind. “For the way I eat, I like to quote Benjamin Franklin: ‘eat in moderation and do not drink to elevation,’” he added.

Beyond health advice, he’s also offered words of encouragement to each of the younger members of the Trojan Family he has met.

“Don’t forget that you’re going to be our future leaders. You’re needed in our society,” Gonzales said. “You’ll change America—but don’t change it too much, we’ve got something nice here.”

When he’s not studying or spending time with his family, one of Gonzales’ favorite pastimes is reminiscing about his life. Finishing his degree with the course in guided autobiography has not only provided him with more insight about how to share his life story with others but has also given him even more happy memories to appreciate, he said.

“I enjoyed coming to USC, and I enjoyed the atmosphere of knowledge,” he added. “Knowledge is intrinsic, and that can never be taken away from you.”