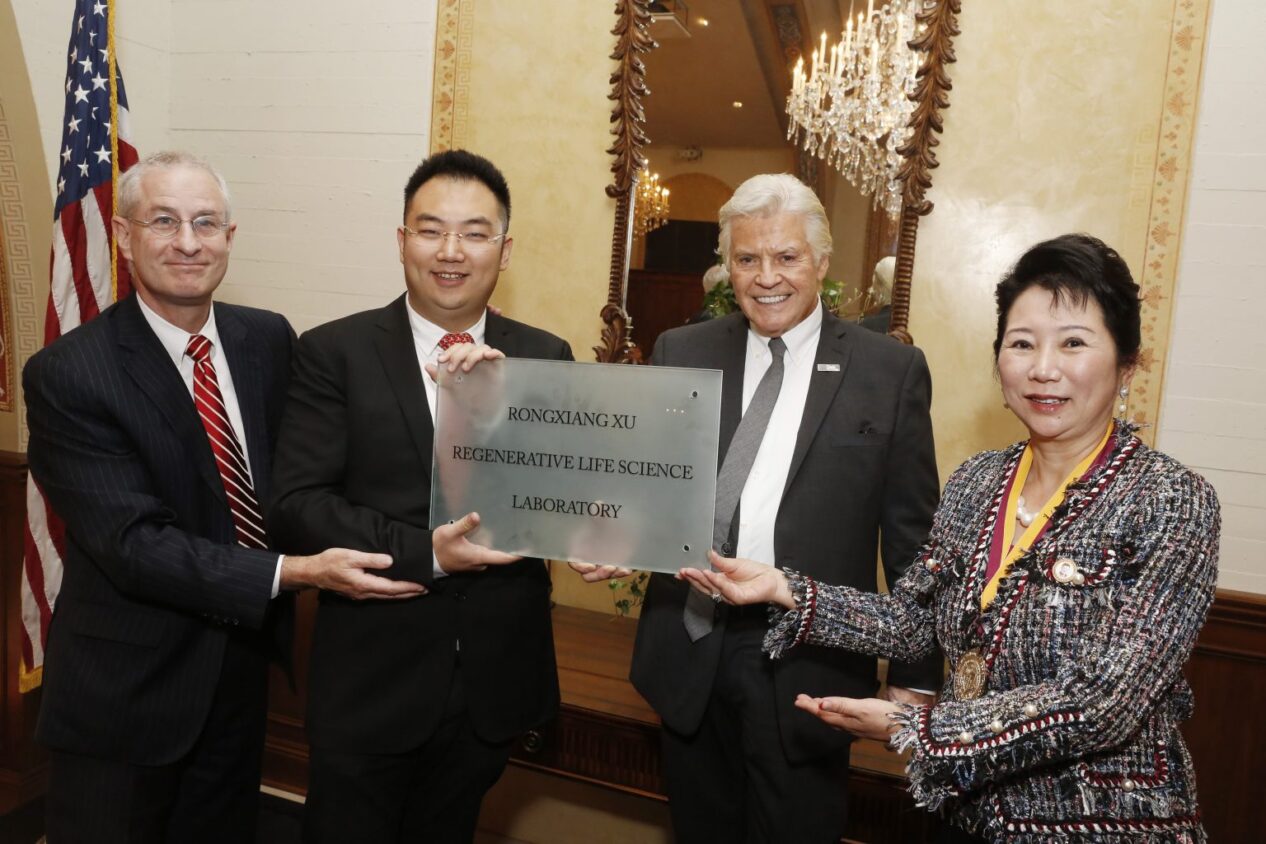 USC Leonard Davis School Dean Pinchas Cohen announced the gift at a dedication and installation ceremony at Town and Gown on Monday, December 12 that was attended by elected officials,  USC administrators, and Davis School leaders, faculty and students.

Xu’s gift ranks among the USC Leonard Davis School’s largest endowed gifts and will support the school in its mission to promote healthy aging for individuals, communities and societies through leadership and innovation in research, education and practice.

“Kevin and his late father Rongxiang Xu have demonstrated a commitment to leveraging scientific discoveries to improve the quality of life for current and future generations,” said Cohen. “This generous gift will have an immediate impact in allowing us to advance research and innovation toward this shared goal.”

Rongxiang Xu was a trained surgeon who specialized in developing novel wound therapy treatments. His research in tissue repair and regeneration led to multiple U.S. patents and the growth of the multi-national company, MEBO International. Kevin Xu is CEO of the company.

Cohen presented Li Li, Rongxiang Xu’s widow and Kevin’s mother, with the Dean’s Medallion – the highest honor the school can bestow on partners and supporters – for her instrumental role in recognizing and enabling the USC Leonard Davis School’s research in aging across the lifespan. Li, who began her career in pediatrics, serves as chairman and president of the Rongxiang Xu Foundation.

“My parents’ example inspired me to help others, what they gave me was more than a piece of advice — it was a way to live. Human life is the most valuable commodity, and our highest standard is humanity’s well-being,” said Kevin Xu. “As our global population ages, I am proud to support the USC Leonard Davis School as they make research breakthroughs and train the next generation of gerontology leaders and entrepreneurs.”

This gift is part of continued USC Leonard Davis School support from the Xu family, including an earlier pledge from Xu and his wife, Leah Yang MA’13, establishing the Brighten Award for Entrepreneurial Gerontology, named in honor of their son and designed to spur the development of products and services to improve the lives of older persons and their families.

As part of the installation ceremony, Cohen presented Xu and USC Leonard Davis School Professor George Shannon with miniature replica chairs to symbolize the establishment of the newly named chair position. Shannon, who earned his PhD in gerontology from the Davis School after a three-decade acting career, has been named the inaugural holder of the chair and will serve as the director of the newly-named lab. His current work aims to promote physical, spiritual and mental well-being among people of all ages.

“I am honored to be appointed to this position,” said Shannon, who taught Xu when he was a student at USC. “The Rongxiang Xu Lab, Kevin Xu Chair and Brighten Award are intergenerational testaments to the importance of the field of gerontology and USC’s leadership in the field.”