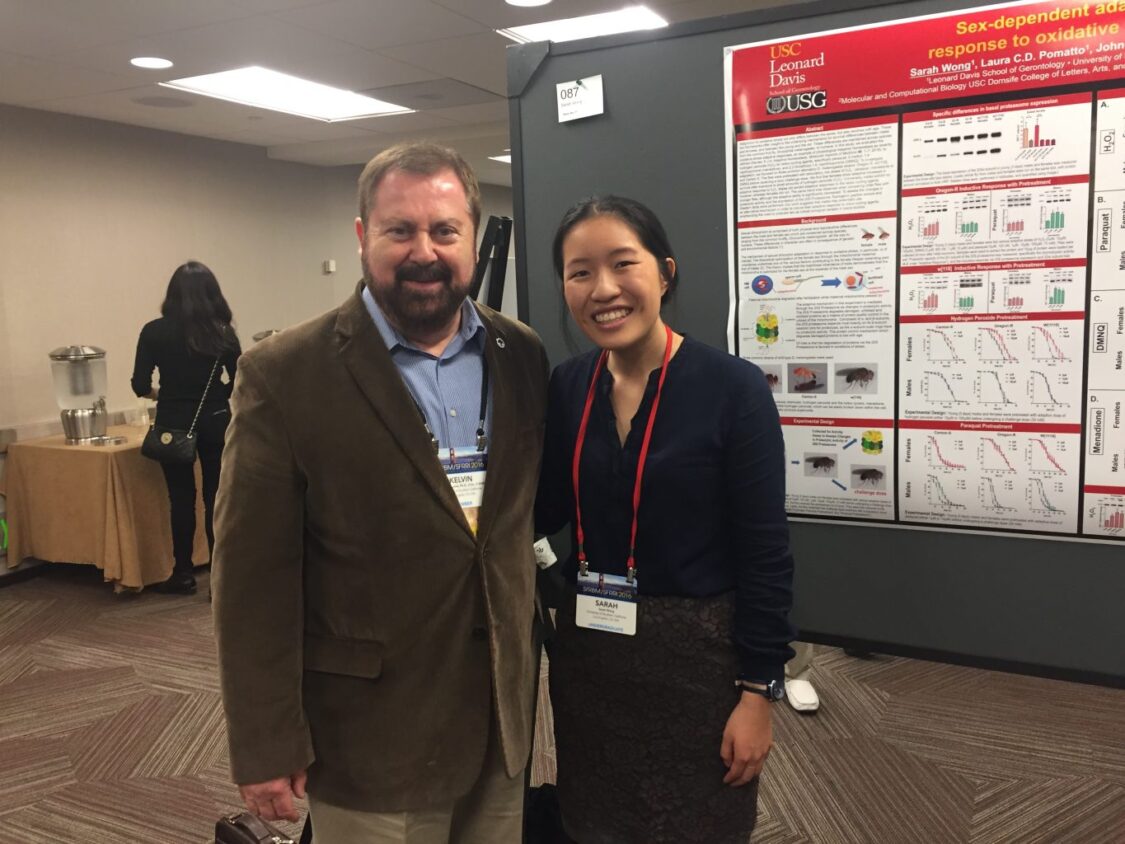 Several researchers in the laboratory of Dr. Kelvin J. A. Davies, Vice Dean of the USC Leonard Davis School and pioneer in free radical biology research, have recently been recognized for research achievement with travel and research support awards.

“I am so proud of the undergraduate, graduate, and post-doctoral students in my laboratory group,” Davies said. “They exemplify the very best traits of inquisitiveness, enthusiasm, and diligence that are fundamental hallmarks of all successful scientists.”

USC undergraduate students Sarah Wong and Mayme Cline received travel awards from the USC Student Government (USG) to attend the 23rd Annual Meeting of the Society of Free Radical Biology and Medicine (SFRBM), a coveted opportunity for these two up-and-coming researchers. Wong is a junior majoring in Gerontology within the USC Leonard Davis School of Gerontology, and Cline is a senior majoring in Biomedical Engineering within the Viterbi School of Engineering.

Wong and Cline work closely with fifth-year PhD candidate Laura Corrales-Diaz Pomatto to understand the age-related changes in protein turnover. Their work specifically focuses on a concept termed “adaptive homeostasis,” a phenomenon which enables cells, tissues, and whole organisms to increase the expression of enzymes that protect against future oxidative insults, which could hinder cellular function.

Wong’s work utilizes the model organism, D. melanogaster, or more commonly known as the fruit-fly, to explore sex-dependent differences in adaptation in response to various oxidants, including hydrogen peroxide and the redox cycler, paraquat. Her research uses three common laboratory strains, which she feeds an ‘adaptive’ low-dose of an oxidant to assess the impact upon the 20S proteasome. In all instances, she finds males show an increase in survival and 20S proteasome expression and activity upon paraquat pretreatment, with no change in females. Conversely, pretreatment with hydrogen peroxide, induces a female-specific adaptive response. Indicating a sex-dependent difference in adaptation, which could have a broader impact upon changes in the health-span with age.

Presenting this work, Wong won the prestigious Young Investigator’s Award at the recent SFRBM meeting in San Francisco, CA. In addition, Wong has also recently been awarded the 2017 American Society of Cell Biology Undergraduate Travel Award, sponsored by the Worthington Biochemical Corporation and will also be attending the Emerging Researchers National Conference in the STEM-related fields. She also received a 2017 USC Provost’s Research Fellowship Award, which will provide $1000 in support of her research. Besides her dedication to lab work, Wong is actively involved in the USC Leonard Davis School family as the current SGA President.

Cline’s work focuses on understanding the age-related changes in tissues derived from young (3-month) and middle-aged (18-month) female mice exposed to vehicular-derived nanoparticulate matter (nPM) upon the 20S proteasome, its regulators, and the immunoproteasome. Her work has shown that the increase of these key stress-responsive enzymes are nPM and age-dependent, and demonstrate a basal increase with age, irrespective nPM exposure. Together, her work highlights the age-related compression of the adaptive stress response. Cline will have the opportunity to share her work at the up and coming 2017 Emerging Researchers National Conference in the STEM-related fields. 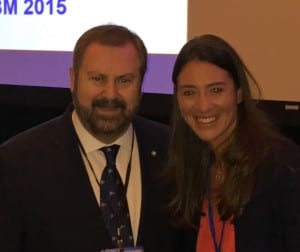 These awards are the latest among the many recent awards presented to members of the Davies lab. Doctoral candidate Laura Corrales-Diaz Pomatto has also recently been awarded a Minority Travel Award for the 2017 ASCB meeting as well as an honorable mention for the Rockwell Dennis Hunt Scholastic Award, which provides $1000 in research support. She is also a past-recipient of the 2016 SFRBM Young Investigators’ Award. 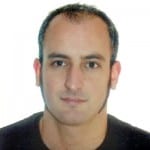 Post-Doctoral Researcher Vicent Bonet-Costa received a USC-Sponsored Post-Doctoral Travel Award to attend the 2017 SFRBM Meeting. In addition, the Davies’ lab has a new post-doctoral researcher, Dr. Patrick Sun, who is one of only two researchers to receive an NIH-sponsored training fellowship, under the new USC-Buck Training Grant. All researchers focus on understanding the age-related changes in the adaptive stress response.

Above: Davies with Sarah Wong at the SFRBM 2016 conference.