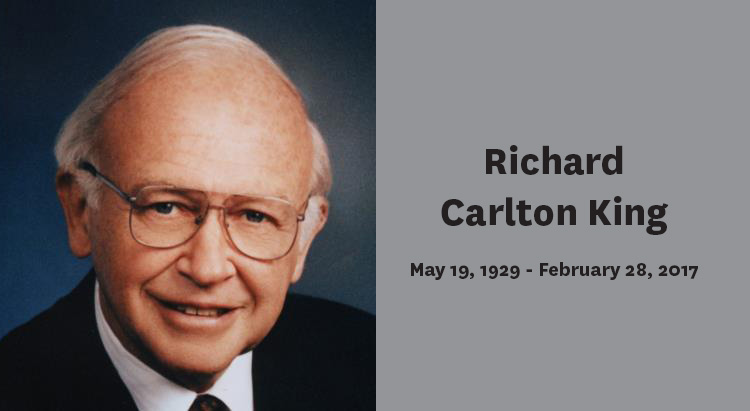 The USC Leonard Davis School of Gerontology mourns the loss of Richard King, a member of the Board of Councilors.

From King’s obituary in the Los Angeles Times:

In the early hours of Tuesday, February 28, 2017, Richard Carlton King’s life on this planet came full circle as he was called to make the journey Home to be with God. His wife of 41 years, Carol Boyce Soucek King, was at his side in Pasadena, California, surrounded by welcoming peace, loving care, and KUSC music.

It was during the Korean War and immediately following that Richard King, who served in the US Army 1951-54, discovered his deep affinity for the people of Asia, and decided to devote his life to building bridges between them and those in the United States. Opportunity and inclination led to his endeavors being primarily focused on Japan-US relationships and, starting in 1979, on China-US relationships. Richard King, Hon.DB, was Founder of King International Group, specializing in US-Asia business relations. In addition, he was Co-Founder of the Business Renaissance Institute, for many years the sponsor of research/conference/publications focused on raising ethics and morality in the workplace and, at the same time, demonstrating to business leaders that doing good has a positive effect on the bottom line. With Satinder Dhiman, PhD,EdD, and Joan F. Marques, EdD, he has co-authored three books on Spirituality in the Workplace. He was also Co-Founder of Go Green Solutions which is devoted to environment-friendly solutions such as its new line of LED lighting.

Prior to establishing his firm in 1980, Richard King held management positions in international business development for twelve years with Kaiser Steel and Kaiser Industries. Later, he served for three years as President and Chief Executive Officer of Birtcher Corporation, an international medical electronics company. In 1978, Richard was appointed by the Governor of California to serve a two-year term as the State’s First Director of International Trade. He served on numerous boards and advisory boards, including the Japan Business Association of Southern California, and All Nippon Airways. He was past Chairman and President of Japan American Society, as well as past President and founder of the Hong Kong Association of Southern California. He was Chairman of US-China Business Institute, a training and education consulting firm headquartered in Hefei, Anhui Province, China. He was a Trustee and Chairman Emeritus of Woodbury University and served four years as Dean of the School of Business at Woodbury. He served on the Global Affairs Advisory Board at Occidental College, and on the Advisory Board of the University of Southern California’s School of Architecture’s American Academy in China.

Also at USC he served as Chairman of the USC Leonard Davis School of Gerontology Board of Councilors, from which he helped forge a relationship with Yamano College of Aesthetics in Japan to provide on-line gerontology courses in Asia. He was an advisor in the formation of Born To Be Loved, a charity founded by Michael Cooney to help severely abused children. He also felt privileged to be a longtime supportive member of Pasadena Heritage, Gamble House/USC, and USC Pacific Asia Museum, and enjoyed many happy times as a member of Caltech Associates and fifty years as a member of Jonathan Club in downtown Los Angeles and at the Club’s Santa Monica beach facility. In 1999, Emperor Akihito and the Government of Japan honored Richard with “The Order of the Rising Sun, Golden Rays and Rosette”. This award recognizes his contribution to the strengthening of economic ties and mutual understanding between Japan and the U.S.

Richard King was born in 1929 in Lehigh, Pennsylvania, to Frank Martin King and Minna Minerva Steyert King. He went on to receive a Bachelor of Science degree from Syracuse University, a Master of Arts degree from Occidental College, and an Honorary Doctorate of Business Administration from Woodbury University. Richard King and his wife Carol, author and founder in 1996 of The Salon on the Spiritually Creative Life, have lived since 1979 in Pasadena, California. Their home, Arroyo del Rey, designed for them in 1979 by Buff & Hensman Architects and now designated a Historic Monument by the City of Pasadena, has become a welcome gathering place for multicultural and multinational business, community, and educational exchange. In the future it will be given to the University of Southern California’s School of Architecture to become the USC Carol Soucek King and Richard King Center for Architecture, Arts and the Humanities.

For the past twelve years, Richard King was grateful for the medical expertise provided by Healthcare Partners in Pasadena and USC Norris Medical Center. And he held in greatest esteem the loving 24-hour assistance during the past four years provided by the live-in caregivers from Ideal Home Care, whose responsibilities were augmented during the past six months by the professional doctors and nurses from Sterling Hospice. Sterling continued this diligent and then non-stop oversight and medical care during his last eighteen days with the staff caregivers at the hospitable Del Mar Park assisted living in Pasadena.

Although the memorial service will be private, please celebrate Richard King’s inspiring life by living and spreading the words of his beloved Native American Prayer with which he has always concluded his wife Carol’s Salon gatherings: “Do all the good you can, With all the means you can, In all the ways you can, To all the people you can, As long as you can.”