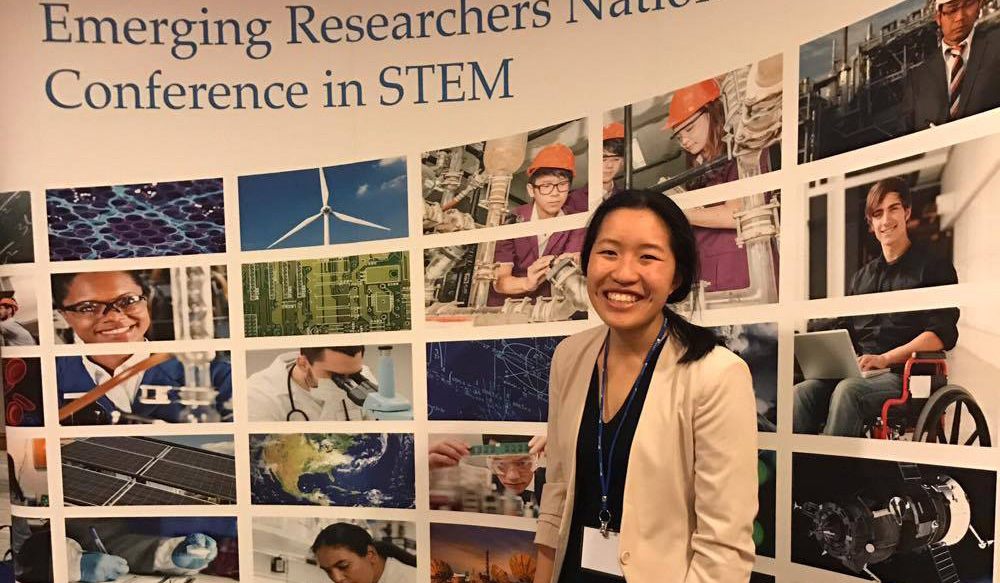 A USC Leonard Davis School of Gerontology student has been recognized for her outstanding research during this year’s National Science Foundation Emerging Researchers National Conference in Science, Technology, Engineering and Mathematics held in Washington D.C. March 2-4.

Sarah Wong, junior in human development and aging, received second place in the Biological Sciences, Cell and Molecular Biology category for her research poster presentation, “Aging and Sex-Dependent Adaptive Homeostasis in Response to Oxidative Stress.” Poster presentations are evaluated by both the merit of a submitted abstract and the caliber of the presentation.

Wong’s work utilizes the model organism D. melanogaster, or fruit fly, to explore sex-dependent differences in stress adaptation in response to various oxidants, including hydrogen peroxide and redox cyclers, such as the herbicide paraquat. Three common laboratory strains of flies were fed a low, “adaptive” dose of an oxidant to assess the impact upon the 20S proteasome, a protein complex that degrades unfolded or damaged proteins within cells.

In all instances, males showed increases in survival as well as 20S proteasome expression and activity with paraquat pretreatment, with no change in females. Conversely, pretreatment with hydrogen peroxide, induced a female-specific adaptive response, indicating a sex-dependent difference in adaptation, Wong said.

“Our lab had previously shown a female-specific adaptation to hydrogen peroxide in the Drosophila strain, w[1118]. We wanted to ensure that this was not a strain-specific phenomenon and tested wild-type strains against the two classes of oxidants. Across the three strains, we have found a female-specific adaptation to hydrogen peroxide and, interestingly, a male-specific adaptation to redox cyclers [including paraquat],” Wong said. “Oxidative stress is a major theory behind aging and also a proponent of forms of chronic diseases. With age, organisms are unable to cope with such stresses especially through loss of protein quality control and adaptation. We believe our work can be extrapolated to provide insight into differences in lifespan between males and females and with chronic disease presentation and severity.”

The conference is hosted by the American Association for the Advancement of Science Education and Human Resources Programs and the National Science Foundation Division of Human Resource Development and aims to help undergraduate and graduate students enhance their science communication skills and prepare for science careers. The event was a particularly memorable experience because of the ability to dialogue with fellow undergraduate researchers, Wong said.

“I am empowered with the knowledge of the many doors that have become opened to me as an undergraduate researcher when looking ahead to the future,” she said.

“I think the world of these people and would not be standing where I am today without them,” Wong said. “Laura especially has been there for me every step of the way since I entered the lab about three years ago and is a model of commitment to excellence, character and strength.”