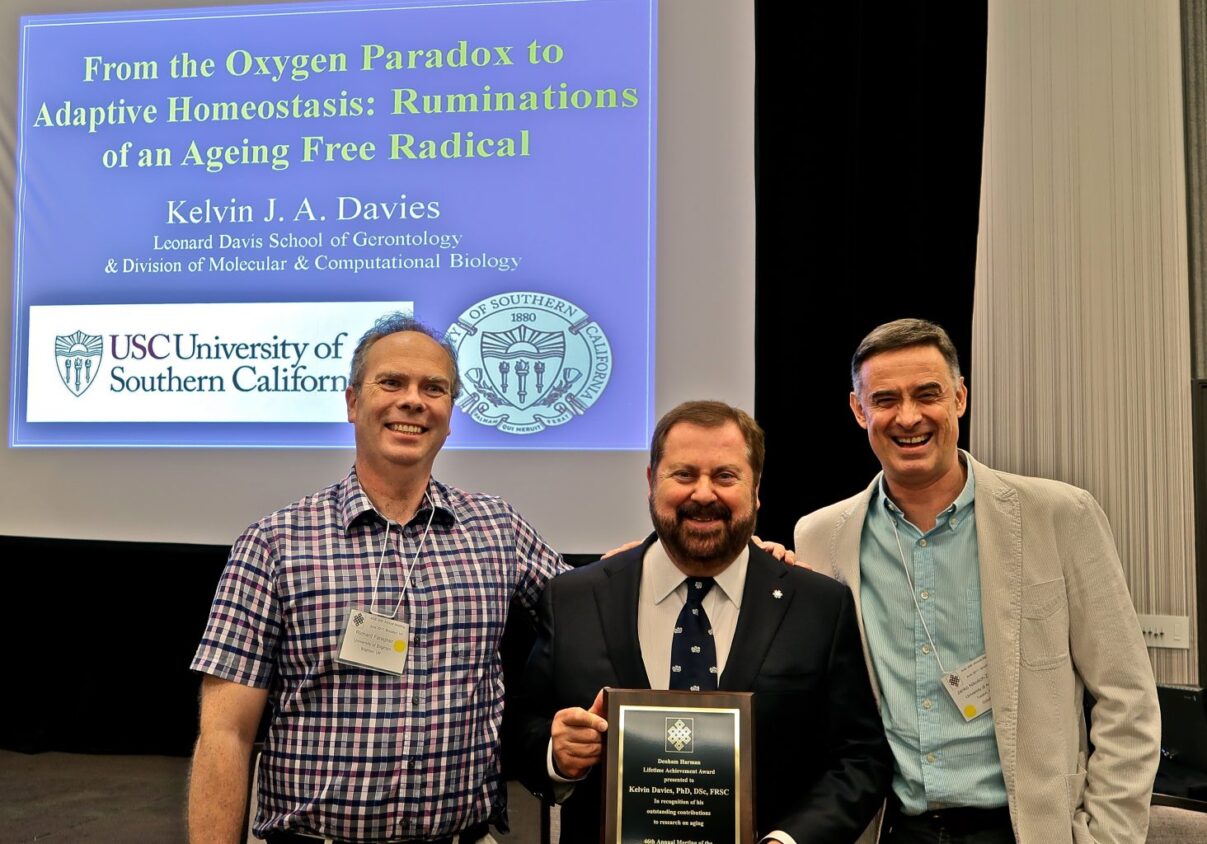 Two recent awards both recognize a world-renowned faculty member of the USC Leonard Davis School of Gerontology for a lifetime of scientific achievement.

Professor Kelvin J. A. Davies received the Denham Harman Award for Lifetime Achievement in Research from the American Aging Association (AGE) on June 11, 2017. Davies, who holds the James E. Birren Chair in Gerontology, is Vice Dean (Dean of Research and Dean of Academic & Faculty Affairs) of the USC Leonard Davis School and professor of molecular and computational biology in the USC Dornsife College of Letters, Arts, and Sciences Biological Sciences Department.

Deeply involved in research into free radicals, oxidative stress, redox regulation, and aging, Davies is the founding editor-in-chief of the journal Free Radical Biology & Medicine. His many contributions to science include pioneering the study of protein oxidation and proteolysis during oxidative stress, as well as gene expression during stress adaptation. In particular, he has been defining the pathways and mechanisms by which adaptive homeostasis—the body’s ability to maintain balance in its many systems under stress—declines with age. This decline predisposes the elderly to stress-related diseases and frailty. Read more about Davies’ research in Vitality magazine.

The Denham Harman Award is AGE’s highest honor, given only in years when an outstanding candidate is nominated to the Board of Councilors. Established in 1978, the award was named in honor of Dr. Denham Harman, a co-founder of AGE, and is a lifetime achievement award given by AGE to researchers who have given outstanding contributions to aging science over the course of their careers. The accolade was presented during AGE’s annual meeting in New York, where Davies presented his Denham Harman Award Lecture, “From the Oxygen Paradox to Adaptive Homeostasis: the Ruminations of an Aging Free Radical.”

“One does not make discoveries in chemistry, biology, or medicine alone.” Davies said. “First one stands on the shoulders of previous scientific giants, and then one walks hand-in-hand with one’s students and colleagues: it’s a privileged way to live one’s life.”

This spring, Davies was also elected as a Fellow of the Royal College of Physicians of Edinburgh, Scotland on April 28, 2017. The Royal College promotes the education and training of physicians and medical scientists, and is one of the three organizations that sets the specialty training standards for physicians in the United Kingdom; Davies is a dual citizen of the UK and US. The Royal College organizes events, courses, training, and research throughout the UK and the world and includes 12,000 members in 91 countries worldwide, of whom only a small fraction are elevated to Fellows status. He will travel to Edinburgh in March 2018 for the induction ceremony.

Of his election to fellowship in the Royal College, Davies said he was “pleased as punch by the great honor being bestowed upon me.”

In addition to these recent honors, Davies is a fellow of 14 national and international societies and academies, including the Royal Society of Chemistry, the Royal Society of Medicine, and the Academy of Europe (Academia Europaea), and he has been elected president of four national and international scientific societies. In 2012 Davies was awarded French knighthood through decoration as Chevalier de l’Ordre National du Mérite Français (Knight of the French National Order of Merit) by then-president Nicolas Sarkozy for his services to science, international cooperation, and humanity.