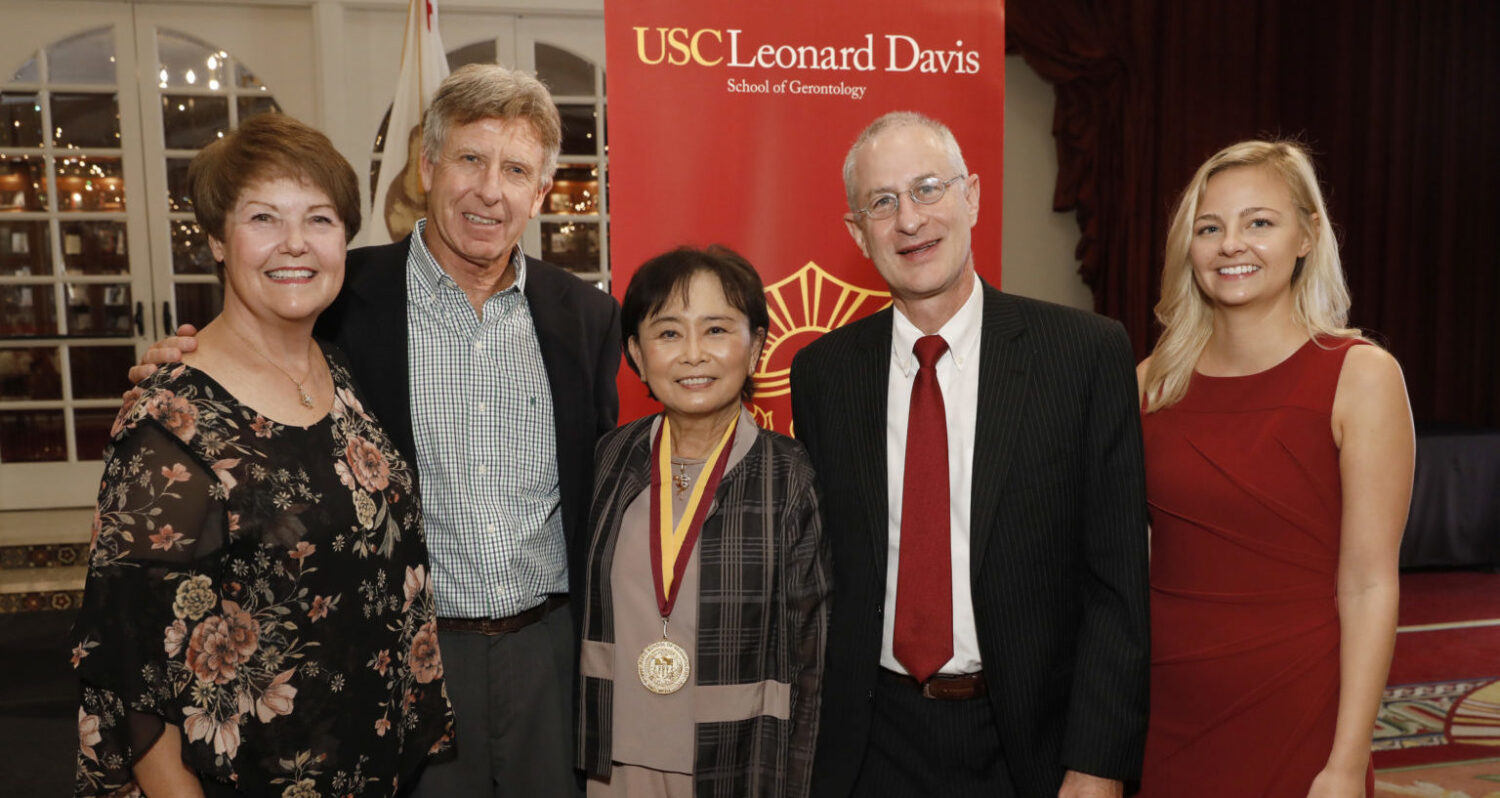 USC Leonard Davis School of Gerontology donors and students recently joined together, along with members of the school faculty, staff and Board of Councilors at the recent Scholars and Benefactors Luncheon, an annual gathering that articulated the dean’s vision for the future of healthy aging and recognized the donor support that makes achieving it a reality. “Your contributions help us extend healthspans, purpose and meaning at every stage of life,” said Dean Pinchas Cohen, noting that more than one third of students receive school scholarships to support their studies. The dean also announced the establishment of a record number of new scholarships, which will allow the school to make its academic programs more accessible to students. “These scholarships are incredibly important for us and for our students, and we all want to say thank you,” he said. Master’s student Roberta Peterson expressed her appreciation to the donors. “Supporters like you, allow students like me to have tremendous opportunities through the USC Leonard Davis School,” she said. Noting that gratitude is actually a powerful agent of health, Professor John Walsh thanked the benefactors for their support and the students for seeking to improve aging for everyone. “People will turn to you in their times of need,” he said. “Thank you for pursuing the noble cause of helping people lead healthy and rewarding lives.” Board of Councilors member and Dean’s Medallion recipient Mei-Lee Ney told students she is excited to be part of the future they are creating. “I have a lot of faith in you,” she said.

Roberta Peterson grew up wanting to join the Chicago Police Department. She decided instead to become a gerontologist, but the motivation behind both career choices is the same. “I’d always wanted to protect and help the vulnerable, and be an advocate for those unable to speak for themselves,” said the second-year USC Leonard Davis School of Gerontology master’s student who spoke at the school’s recent Scholars and Benefactors luncheon. Peterson shared that it was an undergraduate assignment to analyze media portrayals of older adults that steered her toward gerontology as a career choice. “I found that older women were generalized as frail and dependent” said Peterson. “The unfair generalizations opened up my eyes to other issues related to the aging population and I knew I wanted to be involved with making the lives of older adults fairer, safer or better in some way.” She interned at a skilled-nursing facility as part of her schooling and became a nursing assistant after graduation. These experiences – along with helping her family manage her grandmother’s transition to an assisted living facility – made her aware of many of the challenges around providing long term care to older adults. She says some of her work experiences also exposed her ways older adults can be victims of fraud or abuse. “I saw all these things than can go wrong,” she said. “I came to the USC Leonard Davis School so that I could acquire the tools to make them right.” Peterson is grateful for the knowledge and opportunities made available to her as a USC Leonard Davis School student. She’s spoken at gerontology conferences, traveled overseas to learn about aging in other countries, gained access to experts in the field, been mentored by faculty members, and formed close bonds with fellow students. Although she did not choose a career in law enforcement, she is still passionate about a career that protects and serves those in need. When she graduates, she wants to advocate for improvements in policy, education and awareness around issues of elder abuse. “Because of the encouragement and support I’ve received these past two years, I now have the education and experience to be part of making the changes I want to see that can help make life better for older adults.”