USC Professors Kelvin J. A. Davies and Enrique Cadenas have been named officers of France’s National Order of Merit — a prestigious award and honor bestowed by the President of France (Grand Master of the Order) that recognizes their contributions and service to science, international cooperation, and France.

Davies, the James E. Birren Professor of Gerontology and Dean of Faculty at the USC Leonard Davis School of Gerontology, is among the world’s leading experts on free radicals, oxidative stress, and adaptation biology and medicine. Cadenas, the Charles Krown/Alumni Professor in Pharmaceutical Sciences at the USC School of Pharmacy, is a top scientist exploring the role of mitochondrion-centered processes in neurodegenerative diseases, with an emphasis on Alzheimer’s disease. Both Davies and Cadenas have joint appointments in the Keck School of Medicine Department of Biochemistry and Molecular Medicine, and Davies has an additional joint appointment in Molecular and Computational Biology at the Dornsife College of Letters, Arts, and Sciences.

Davies and Cadenas have long-term ongoing research collaborations with distinguished French colleagues and together have organized several international scientific conferences in France and the USA on the biological causes of aging and age-related diseases.

On May 8, they received their warrants and medals at the Beverly Hills residence of the Consul General of France. USC President C. L. Max Nikias; Pinchas Cohen, dean of the USC Leonard Davis School of Gerontology; and Vassilios Papadopoulos, dean of the USC School of Pharmacy, attended the formal award ceremony. 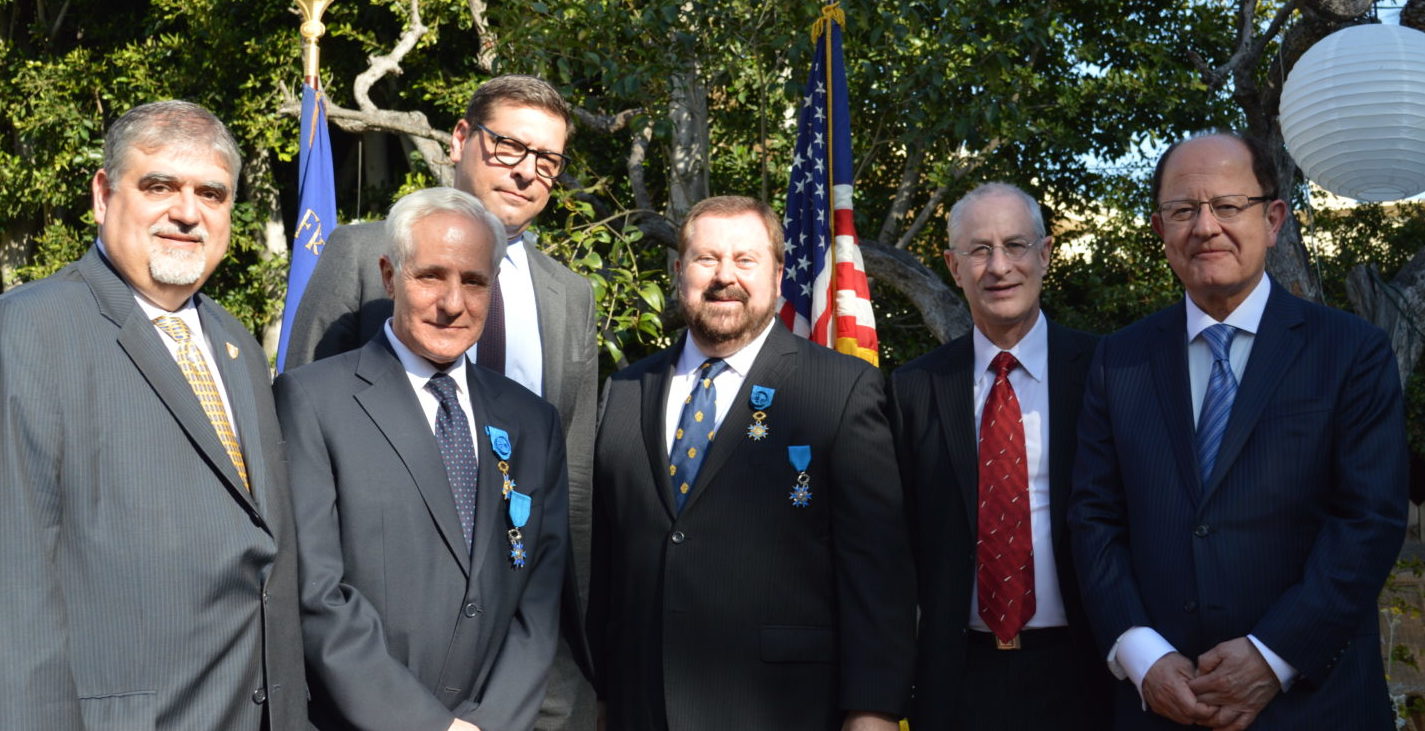 “Professors Davies and Cadenas are scholars, researchers, and pioneers who represent the very best of USC,” says Nikias. “Through their groundbreaking work, they have expanded cooperation with colleagues around the world, led the fight against aging and disease, and advanced human lifespans. The entire university community congratulates them on this well-deserved honor.”

Established in 1963 by President Charles de Gaulle, the National Order of Merit recognizes work that has societal significance beyond a recipient’s own field. New recipients are named knights and can ascend to higher ranks as new merits are established. Davies and Cadenas were made knights in 2012, and their promotion to the officer rank recognizes their exceptional continued contributions.

“I am deeply honored by this promotion, for which most of the credit must go to my students, postdoctoral fellows, colleagues and family,” Davies says. “Of course, the support of USC leaders such as Max Nikias, Mike Quick, and Hassy Cohen has been invaluable. French President Emmanuel Macron has said that, ‘There is no Planet B.’ If we are to improve the human condition and the health of our environment we must cooperate and collaborate globally.”

“I have had opportunities to partner with some extraordinary researchers and institutions around the world on work that has been highly productive and deeply rewarding,” Cadenas says. “To be honored for that work is icing on the cake. I am grateful to my colleagues, for the support of USC School of Pharmacy Dean Vassilios Papadopoulos, and for the continued connection between our two nations.”

The Order of Merit medal, along with a rosette indicating the officer rank, is worn on the left chest and features the profile of Marianne, the French national emblem of liberty and reason, and crossed tri-color flags suspended from a laurel wreath and a blue ribbon.

The two USC honorees will travel to France in July for a ceremony marking their promotions.

“Global problems require global solutions, and the USC School of Pharmacy has long been committed to fostering fruitful research partnerships that advance knowledge and improve quality of life for all,” Papadopoulos says. “We are proud of the incredible work Dr. Cadenas has accomplished on our campus, in our region, and around the world.”

“Kelvin Davies’ pioneering research has advanced our understanding of the processes related to age-related declines and has inspired students and colleagues here at the USC Leonard Davis School and around the world to look for solutions to improve lifespan health,” Cohen says. “It is fitting that his contributions are being honored by France, a country known for its health and longevity.”