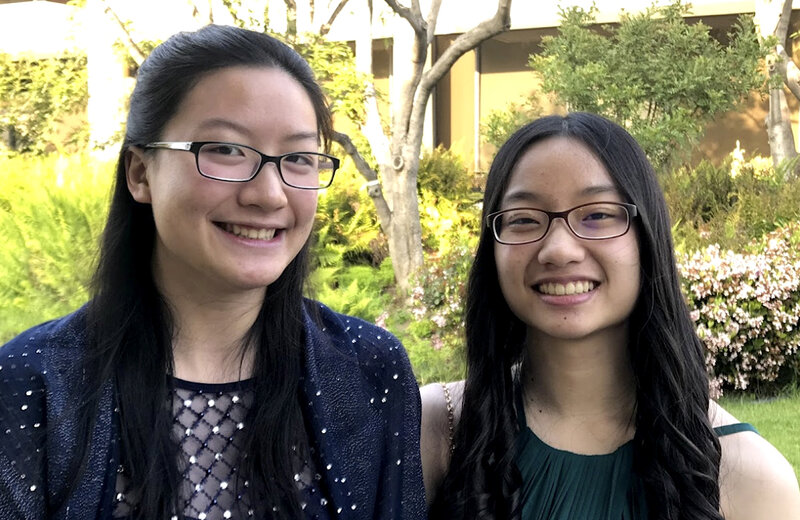 The high-achieving sisters, both USC Presidential Scholars, eye careers in medicine while studying at USC Leonard Davis and USC Dornsife.

Recent high school graduates Samantha and Sara Wu share much in common. They both played volleyball and perform in orchestras, Sara on the viola and Samantha on the cello. The two were National Merit Scholar finalists. And, like most twins, they enjoy a unique closeness. “We have a lot of inside jokes,” they both laugh.

In May, the sisters graduated at the top of their class at Maranatha High School (MHS) in Pasadena, California. Samantha was the salutatorian and Sara the valedictorian — their GPAs differed by just a hundredth of a point.

Now they embark on another shared adventure as they both head to USC this fall. Samantha joins the USC Dornsife College of Letters, Arts and Sciences as a biochemistry major in the Freshman Science Honors Program while Sara heads to USC Leonard Davis School of Gerontology to major in human development and aging.

High achievement started early for the Wus: “In third grade, they joined the city library’s summer reading program. And since they both love reading, each of them read over 300 books that summer. The librarian said the girls broke the record,” says their mother, Sheila Wu. Both sisters earned scholarships to MHS.

“Going into freshman year of high school, we were just taking the classes that we wanted to take. At the end of that year, they told us that we were tied for first,” says Sara. This neck-and-neck placement continued over the next four years as they tackled Advanced Placement classes and participated in a range of extracurriculars from Ambassador Club to Science Bowl. The two earned almost all As, but one class proved an obstacle to them both.

“I got one B, in AP Calculus,” says Sara. It ended up being an illuminating experience for her. “I learned to be able to give grace to myself and not expect everything of myself.”

Samantha shares her sister’s feeling. “The first challenge that I found in high school, academically, would be calculus, which I took my sophomore year,” she says. “I didn’t have any friends in the class to ask for help. But, it was actually a really good experience because it showed me what it was like to be challenged.” 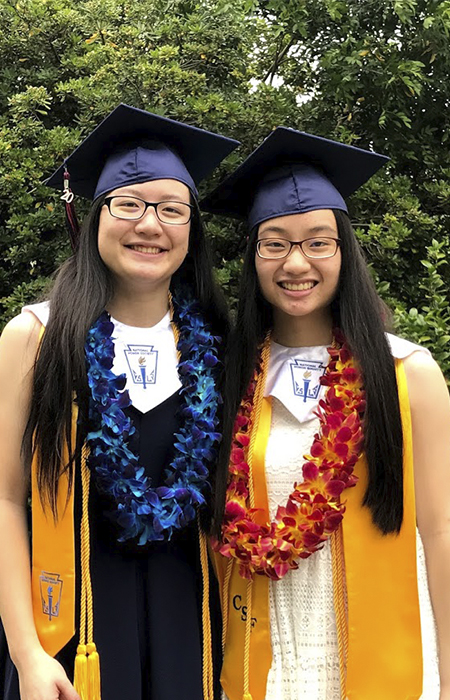 The two credit their parents with their drive. “Our mom is a psychologist and our dad’s in real estate, and they’re both very hard workers. I think that’s where Samantha and I got a lot of our influence from, just watching them work so hard and do what they love to do,” says Sara.

Although coronavirus put a damper on in-person celebrations, the two were still able to commemorate their graduation and class honors with a cake from Porto’s, Los Angeles’ classic Cuban bakery.

The Wus both cite USC’s national ranking in multiple categories as reason for their university choice. “I heard about USC’s gerontology program and how they were the top in the world. It kind of became my dream school,” says Sara.

Samantha agrees: “If I want to take a class in [the USC School of Cinematic Arts], for instance, I know that’s going to be constructive. I can explore more things.”

Both sisters received USC Presidential Scholarships. The scholarships are awarded to select incoming freshman based on academic merit, community service and leadership.

Samantha is considering combining her interest in psychology and biochemistry by becoming a psychiatrist. To gain more experience in the chemistry field, she assisted her science teacher at MHS, Matthew Ketterling, in running an honors chemistry course for two summers. “I helped with lectures, tutoring and preparing solutions. That exposure made me want to go into biochemistry,” says Samantha.

Her sister is pursuing her goal of becoming a geriatric physician. She also plans to join some of USC’s on-campus Christian organizations, continuing her high school ministry work. “I like to help people,” Sara says.

A post-high school summer spent mostly at home due to the coronavirus might have been dull, but the two have come up with productive activities for themselves. Sara’s been steadily improving her Spanish language skills, a study she plans to continue at USC. Samantha started a YouTube channel with a friend and fellow MHS student who is attending UCLA this fall. The two create videos that help college applicants with their essays and SATs.

Due to the coronavirus pandemic, the Wus are taking online classes this semester but are eager to be on campus once it reopens. Will the tightknit siblings also pair up as roommates once they get a dorm assignment? They laugh and shake their heads. Even the closest sisterly bond has its limits.