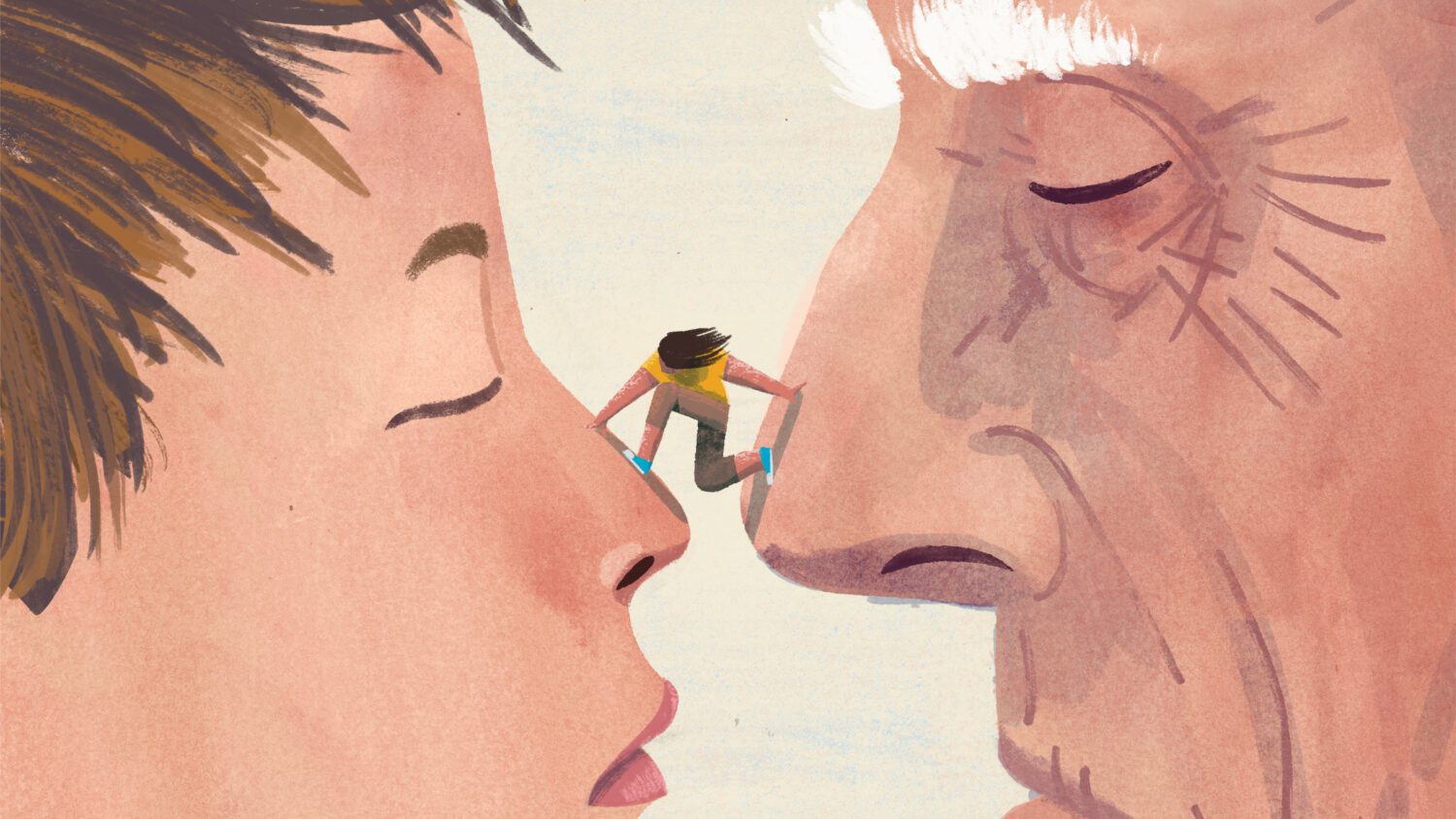 Labor of Love: COVID-19 Made it Clear We Need to Care for Caregivers

Home » Labor of Love: COVID-19 Made it Clear We Need to Care for Caregivers

The pandemic kept kids home from school and upended the workplace, placing Americans who care for aging family members under even more pressure.

Before the COVID-19 pandemic, life was plenty busy for Jason Trujillo and his family.

He and his wife, Sherrie Jong, have two children, who in 2016 were ages 4 and 1. Jong — a civil engineer — was the family’s breadwinner as Trujillo completed his first year at Southwestern Law School in Los Angeles. As the couple raised their family and juggled work and school, Jong’s parents, Engie and Monty, were getting older; 82-year-old Monty, especially, struggled to see and hear.

When they found out Monty had Alzheimer’s disease, the family knew he needed someone to care for him. That job fell to Trujillo. At first, he resented the stressful and unexpected role. But his mother helped him put things in perspective. “She said, ‘I didn’t raise you to leave an old man that needs help. Take care of this,’” he recalls. “She was 100% right.”

Trujillo paused law school and became his father-in-law’s main caregiver, making sure Monty saw his doctors, got his medication and stayed connected to the family. When his condition worsened, Monty moved to an assisted living facility, and Trujillo visited him every day.

Then came COVID-19. Around the world, the pandemic abruptly separated residents of assisted living facilities from their loved ones. Caregivers like Trujillo have faced an increasingly difficult and isolating task as they’ve tried to offer support from afar while taking care of kids at home. Even with video calls and other technology, staying in touch — especially with people who have dementia and may not understand the situation — has been tough.

The devastating impact on seniors has pushed caregiving to a crisis point. But according to USC researchers, the pandemic isn’t the cause of this societywide problem — it’s only amplifying challenges that have been there all along. And for these experts in aging, it has never been more urgent to address the social, racial and economic inequities behind these issues and pave a way forward. Now is the time to care for caregivers. 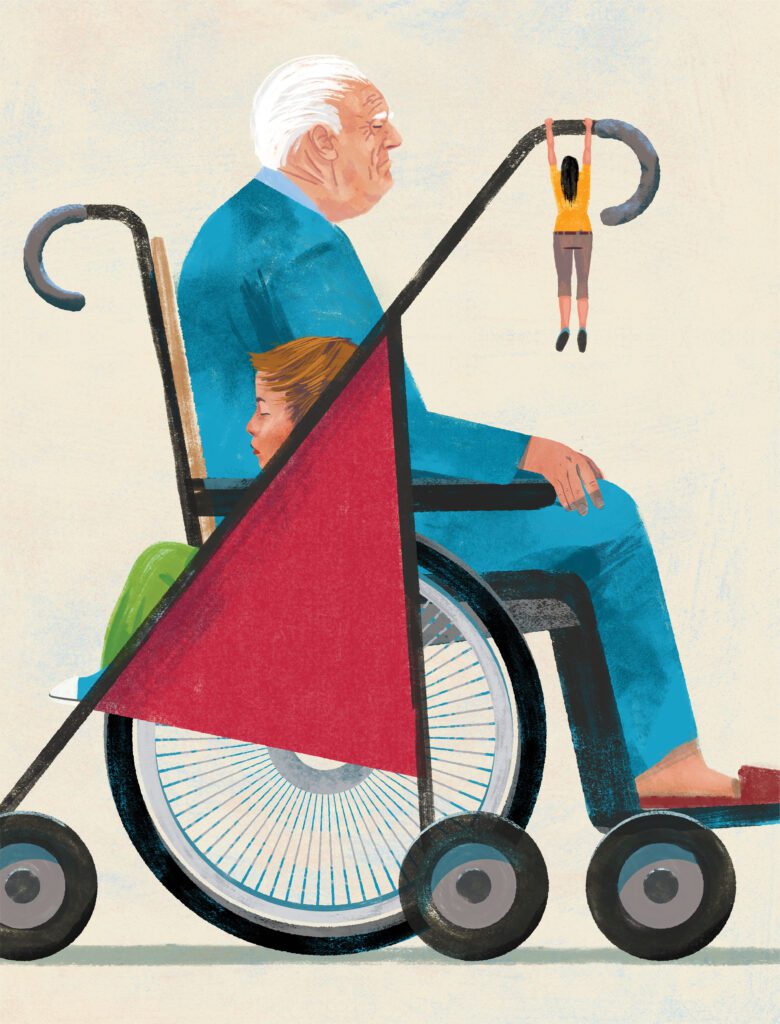 One in 5 Americans provided unpaid assistance with daily living or medical needs to an adult or a child with special needs last year, according to a 2020 National Alliance on Caregiving report. Those 53 million caregivers, nearly 10 million more than reported in 2015, are needed in large part because of the rapidly aging U.S. population.

Raising children while also caring for an older family member puts Trujillo in the “sandwich generation” — adults who find themselves between multiple generations in need of caregiving and support. About 12% of all U.S. parents with children under 18 also care for an adult, according to a 2018 report from the Pew Research Center.

It’s a tough balancing act even in the best of times. Though many cherish the sense of fulfillment and purpose that comes from caring for loved ones, it can lead to physical, mental and financial strain as well. For Trujillo, it meant withdrawing from law school and waiting more than two years before he could start classes again, this time at the University of West Los Angeles.

During the pandemic, many families lost critical support systems as adult day health care centers closed and professional in-home visits stopped. They took over daily errands and other responsibilities for otherwise independent seniors now being urged to stay home.

With these changes, it’s no surprise that caregivers have fared much worse than non-caregivers during the pandemic. They report worse psychological distress and physical symptoms such as fatigue, headaches, body aches and stomach discomfort, according to a Harvard-led data analysis of USC’s Understanding America Study. In a Rosalynn Carter Institute for Caregiving survey, 83% of caregivers reported that the pandemic has increased their stress. Nearly half said it’s much harder to find other caregivers to help relieve the burden.

Feelings of loneliness and exhaustion are also on the rise among caregivers. One survey noted that 1 of every 5 caregivers reported feeling alone, even if they lived with the person for whom they cared.

COVID-19’s impact has been devastating. It’s also been unevenly distributed. Two months after the first stay-at-home order began in Los Angeles, the USC Family Caregiver Support Center checked in with more than 800 client families throughout the county. Latino and Black families were about twice as likely as white families to experience financial strain or difficulties getting adequate resources, including food.

The pandemic has also been particularly hard on women, who make up 61% of the Americans who are caring for someone over 18. Gema Zamarro, an adjunct senior economist with the Center for Economic and Social Research at the USC Dornsife College of Letters, Arts and Sciences, analyzed data from the Understanding America Study and found that women, particularly those without a college degree, have suffered more job losses, taken on more responsibility for child care and experienced much more psychological distress than their male partners.

“We’ve never had a crisis like this that affects child care so drastically,” Zamarro says. With school closures and virtual learning putting increased pressure on parents, women in the sandwich generation may feel especially pressured to leave the workforce. When coupled with the higher proportion of women who have lost their jobs due to COVID-19, she says, it could prove to be a huge setback for gender equality: “Once they are out of the labor force for a while, it’s often very hard for them to come back.” 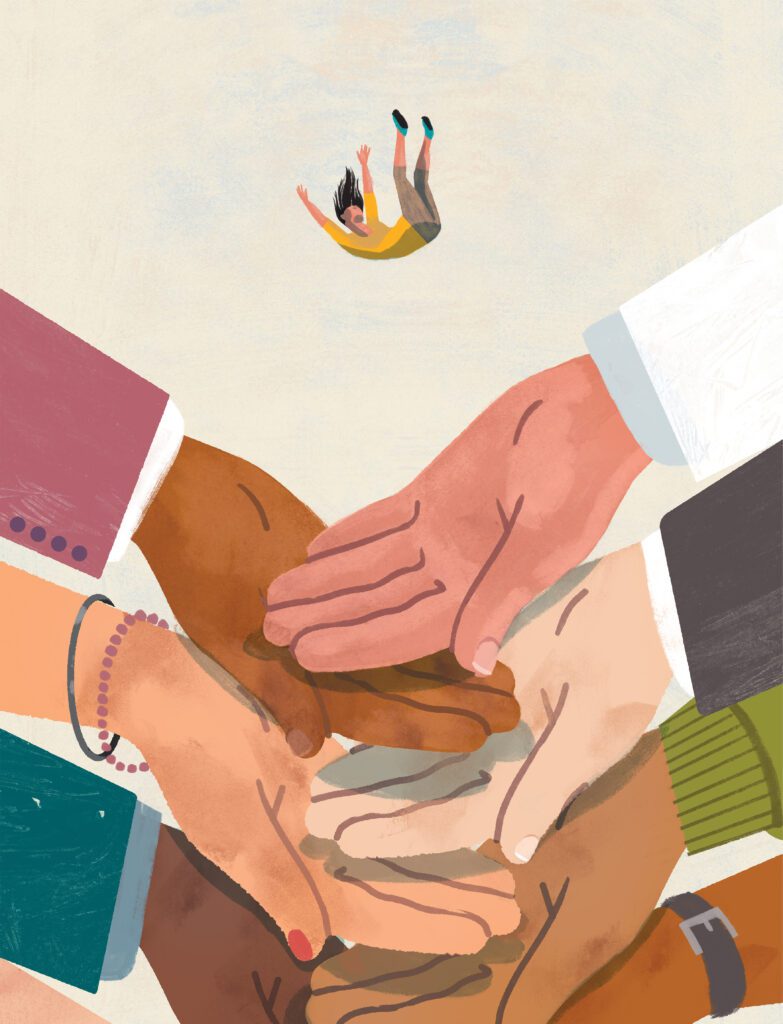 The isolation caused by pandemic lockdowns in senior living facilities is extremely tough for both older adults and their caregivers, says Anne Katz, a clinical professor of social work at the USC Suzanne Dworak-Peck School of Social Work. “People might think, ‘Oh, you placed your loved one in a facility. That’s the end. You can finally have a life,’” she says. “No, they’re constantly thinking about their loved one. There’s often a lot of guilt.”

Trujillo, for one, never wavered in his commitment to helping his father-in-law, even as Monty moved into assisted living. Prior to the pandemic, Trujillo visited daily, making sure Monty showered and ate. He ensured that Monty calmed down after episodes of fear or confusion, had clean clothes and other supplies, and felt updated on everything happening with the family. The visits provided reassurance and a familiar face for his father-in-law.

The family is lucky, Trujillo says, because his wife went to college with Yvonne Kuo, a family care navigator with the USC Family Caregiver Support Center. Kuo and her colleagues connect Los Angeles County residents with information and training, counseling and wellness services, support groups, and legal and financial support. They also offer respite care for loved ones so caregivers can take a break.

After Monty’s Alzheimer’s diagnosis, the family reached out to Kuo, who helped them research assisted living and memory care facilities. She also enrolled Trujillo in a support group that has offered everything from practical advice to a sympathetic ear during tough times. The support group has been invaluable even as it has gone virtual, he says.

“All of these things have come from people’s experiences that went before me,” Trujillo says. “We’re paying this knowledge forward and we’re helping others.”

During the pandemic, USC’s caregiver support center and similar organizations have made a dramatic pivot, not only bringing their operations online but also helping families connect with emergency resources, find personal protective equipment and enroll in delivery services for meals, medications and supplies. Donna Benton, director of the center, says she’s proud of how her staff changed their operations so quickly for the families they serve.

“We were trying to address the need as quickly as we could,” she says. “The USC community really stepped forward to help with the program.”

USC’s efforts to care for caregivers in its neighborhoods include the Community Resource Center for Aging at USC Verdugo Hills Hospital. Funded by a grant from the Navigage Foundation, the center opened in October 2020 to connect older adults and their caregivers with a broad array of home- and community-based resources. The center has helped people sign up for meal and medication deliveries, find safe transportation and even learn how to use Zoom and other popular software and technology.

“As a social worker and gerontologist, I’ve never put technology on a care plan the way I have now,” says Program Manager Adria Navarro PhD ’11. “Embracing tech, from telehealth services to food delivery apps, is a necessity in the current situation.”

At USC, the Center for Work and Family Life also has turned to virtual services to help the university’s staff and faculty cope with the pressures of caregiving during the pandemic. The center provides confidential phone and Zoom counseling appointments for USC employees, along with virtual wellness classes and drop-in Zoom support groups for parents.

Program Manager Angela DiBlasi is based on the USC Health Sciences Campus, and her counseling clients include Keck Medicine of USC frontline health care professionals working amid COVID-19. Many struggle with heightened stress and the pandemic’s impact on the health care system. Before vaccines were available, they also had to consider whether to fulfill their family caregiving responsibilities — and risk carrying the virus home — or leave these responsibilities to their loved ones, she says.

DiBlasi often asks her clients to acknowledge that the situation is tough and to focus on what they can control. Try to find creative ways to bring joy, she suggests. Simple acts like holding physically distanced or drive-by gatherings and sharing thoughtful gifts with isolated loved ones can be mood boosters. She is heartened to see her clients take care of their patients’ physical health while also providing emotional support, like helping them make video calls to stay in touch with worried family members who can’t visit.

“These people go over and beyond, and they care so much,” DiBlasi says. “Not only are they putting their health on the line but also making that connection.”

Building Up Caregiver Resources in Los Angeles and Beyond

Many experts agree that the pandemic has magnified caregiving-related challenges that have existed for years. But there is one difference now, says Kathleen Wilber, professor of gerontology and holder of the Mary Pickford Foundation Chair at the USC Leonard Davis School: COVID-19 has made these problems all but impossible for policymakers to ignore.

The gerontology school’s Secure Old Age Laboratory, led by Wilber, provided administrative support for the California Task Force on Family Caregiving, established in 2015 by the state legislature. The task force featured two other USC experts: Benton, who served as chair, and Karen Lincoln, associate professor of social work. The recommendations they published in 2018 bolstered a $30 million increase in funding for caregiver resource centers throughout California. Task force recommendations were also included in the state’s first-ever Master Plan for Aging, a policy blueprint that included recommendations for more aging-oriented housing, health and care programs.

The goal is to help seniors like Monty and caregivers like his son-in-law thrive. As the pandemic went on, Trujillo had to tightly manage his time. Helping his kids with virtual schooling, reading cases for his own classes and checking in with his older in-laws ate up his daylight hours. His law school courses took up the evenings. It was a tough schedule, but he and his wife, who also balanced professional and child care duties, made it work.

Sadly, Monty succumbed to COVID-19 in December 2020, just weeks after his 87th birthday. Trujillo had to keep up his grueling time management even as he grieved: Monty’s passing happened during final exams.

Despite the sadness of his father-in-law’s death, Trujillo says he chooses to focus on the happy memories. He’s also sharing what he learned about caregiving, because too few people know about caregiving until they’re thrust into it themselves. And as he nears the end of law school, he’s preparing to specialize in elder care law.