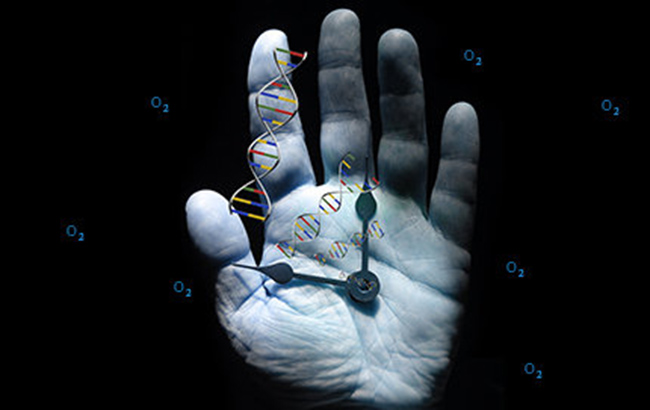 Oxygen, while necessary for life, has a dark side. With every breath taken, free radicals form, and these damaging molecules can wreak havoc in the body. The process is called oxidative stress.

Kelvin Davies, James E. Birren Chair in Gerontology, Vice Dean of the USC Leonard Davis School of Gerontology, and professor of biological sciences, is an expert in oxidative stress in the aging process. He coined the term “The Oxygen Paradox” in 1995 to describe the phenomenon.

“Oxidative stress is what causes iron to rust and apples to go brown,” he said. “For humans, it’s also part of the process that causes wrinkles, many diseases and even aging.”

In the process, free radicals containing unpaired electrons tear through the body like a hurricane, stripping electrons from other molecules — including DNA — to make up for their missing partners.

The body can fight these free radicals, replacing dead cells and repairing DNA. However, it can’t fix all the damage, and that can lead to sickness.

Davies studies oxidative stress as an underlying trigger of aging and diseases such as Huntington’s and Alzheimer’s as well as muscular and cardiovascular deterioration. He recently co-authored — with Henry Forman, professor (research) of gerontology, and research associate Hongqiao Zhang — a review detailing the effects of age on a key cell signally pathway governing the body’s ability to cope with age-related oxidative stress.

Excessive exposure to ultraviolet rays, pollution, smoking, poor diet, certain drugs and environmental toxins all can heighten oxidative stress, but surprisingly, a little oxidative stress can do a body good, he said.

“Imagine you are exposed to an oxidative drug at a low enough dose that it does just a little bit of damage, but nothing too serious.” That exposure can spur the body to protect itself by briefly slowing the growth of certain cells. This process, called growth arrest, causes DNA to become tightly coiled and coated with protective proteins, temporarily halts the expression of unnecessary genes and protein enzymes, and prevents energy being wasted.

At the same time, transient effects called adaptive gene responses are turned on to allow the selective expression of specific genes and protein enzymes that actually protect against stress. Turning on these adaptive responses protects the body against toxicity if it receives a higher, potentially toxic dose of that drug the next day.

“We have now found that we can actually bring down the dose of that pre-treatment, adaptive dose so low that it causes no damage at all, but still generates a protective adaptive response,” he said. “I call this process, adaptive homeostasis.”

The body responds by creating protective protein enzymes. Some intercept and inactivate free radicals, while other enzymes recognize damaged molecules and remove them before they become toxic. Still others repair damaged DNA.

“That which does not kill us makes us stronger,” he said, quoting Friedrich Nietzsche. “That could well describe low-level oxidative stress. If it’s not enough to kill the cell, and it turns on growth-arrest and adaptive responses, then the cell survives and actually gets stronger.”