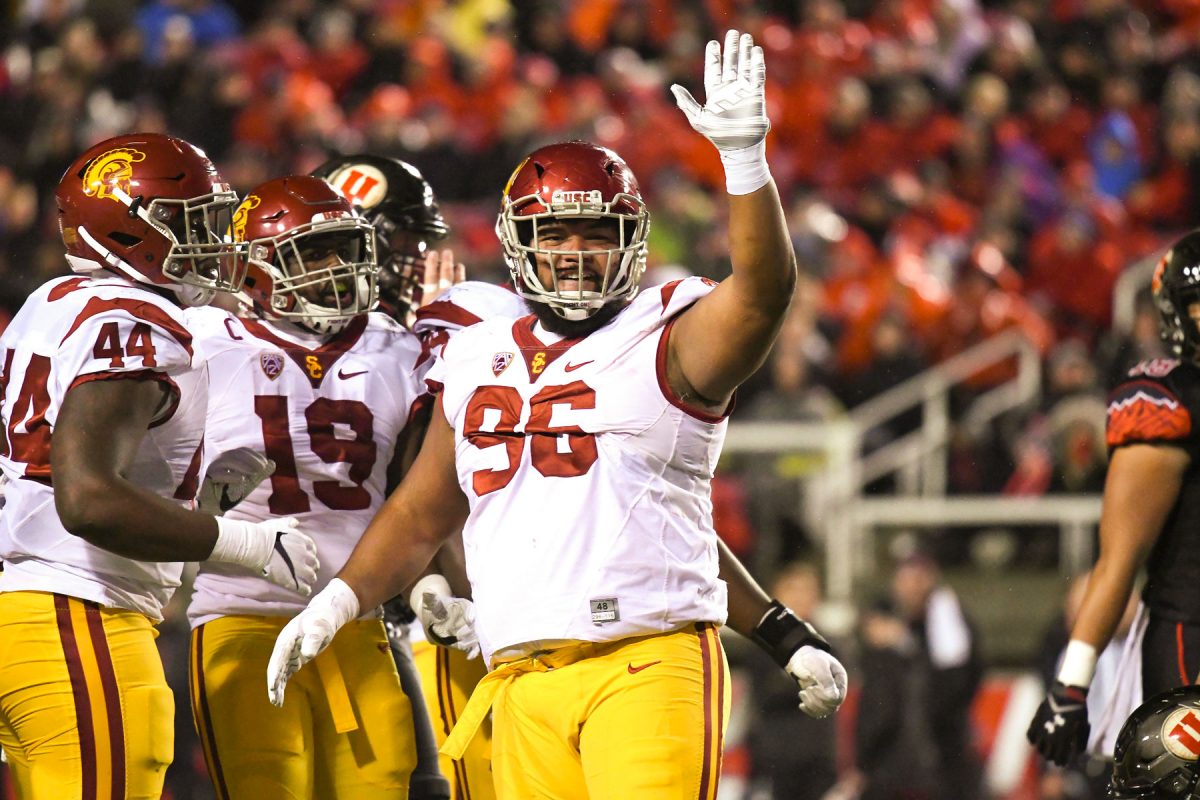 Stevie Tu’ikolovatu takes Rose Bowl honors, but has a bigger picture in mind

This year’s “grandaddy of them all” — the 103rd Rose Bowl — was a fitting final bow for USC’s Stevie Tu’ikolovatu. While quarterback Sam Darnold’s heroics led the Trojans to a dramatic 52-49 victory over Penn State, Tu’ikolovatu quietly racked up tackle after tackle on defense.

His understated veteran experience and leadership on the defensive line marked Tu’ikolovatu’s last game in cardinal and gold and earned him the game’s defensive MVP award. Did the tranquil 25-year-old graduate student ever imagine that he’d ever play — and win — in a Rose Bowl in his final season of collegiate football?

“No way, man,” Tu’ikolovatu told reporters afterward. “Not in a million years.”

Maybe you can credit his late grandfather.

Family patriarch Sonasi Po’uha instilled in his grandson the importance of practice, whistling from the stands for more drills, more running and more repetitions than any of his coaches.

“I think about him when we have hard practices or hard games and my body is sore,” Tu’ikolovatu said earlier in the season, thinking back on how he got here. “The stuff he put me through was much crazier than what we are doing now, so it helps me mentally get through anything.”

The results can be seen in the tackles, blocks and pressure the 6-foot-1, 320-pound Trojan defensive tackle applies to opposing teams. Tu’ikolovatu earned praise all season for being a mentor and anchor for USC’s defensive line.

But Po’uha also imparted another practice that’s big in his native Tonga and remains a major part of Tu’ikolovatu’s life today: respect for elders. When Po’uha was diagnosed with terminal cancer in 2009, family members moved in with him, sharing traditions like feasting on pigs they had roasted in the backyard. Po’uha spent his final months at home, surrounded and celebrated by his loved ones.

“We were able to act as his hospice nurses, and it was a time that my family and I really enjoyed,” said Tu’ikolovatu, who adds that he actually prefers to be around an older crowd. “I like to learn from them. I think they have a lot of wisdom to share.”

Tu’ikolovatu graduated with a bachelor’s degree in sociology from the University of Utah in 2016. Still eligible to play football for another year, he transferred to USC. For the football, sure. But also for the opportunity to earn a master’s degree from the USC Leonard Davis School of Gerontology.

At USC Leonard Davis, he’s learning about social policy and societal trends for the aging population. In one class he was shocked to learn that falls are the leading cause of injury and deaths from injury among older adults in the United States. In another, he was surprised to see such differences in care for seniors.

“I thought people dying in their homes was typical around the whole world because that has always been in our culture,” he says. “I don’t think anyone would want to die anywhere but home.”

Tu’ikolovatu hopes to head to the NFL after graduation and eventually wants to blend his academic and athletic experience in areas like strength training and nutrition to help people age healthfully. Down the road, he and his wife would like to open care facilities so that older adults can have a better quality of life.

His field of study was initially a source of humor from some of his younger teammates, who joked that he was studying aging because he was the oldest person on the team. But like his grandfather, Tu’ikolovato’s chosen subject has now become a source of inspiration.

“At some point in life everyone is going to reach the same struggles as they age,” he said. “I tell everyone, the more you know, the better off you’ll be.”