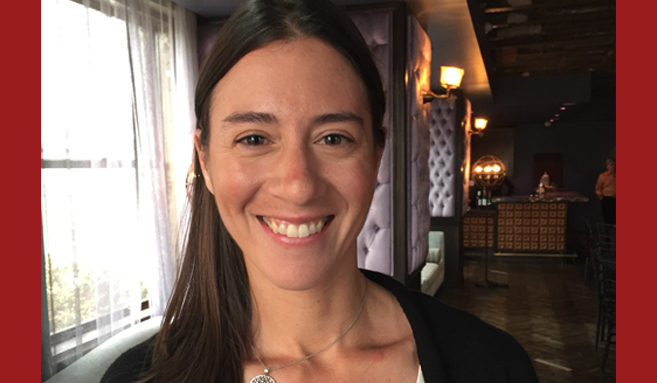 A Trojan since 2007, Laura Corrales-Diaz Pomatto ’11, MS ’12, PhD ‘17 has made history as the first-ever graduate of the USC Leonard Davis School of Gerontology PhD in the Biology of Aging program, the first formal program of its kind in the U.S.

It all began when first learned about the Davis School prior to her freshman year while flipping through a pamphlet from USC that explained all the different schools, she says.

“I was really taken with gerontology in large part because of the very positive relationship I had with my own grandparents while growing up,” she says. “During freshman orientation, I remember going with my dad to meet with [USC Leonard Davis School Academic Advisor] Jim DeVera and asking about the classes and the program and his recommendation for my first gero class. I still go to Jim for my PhD forms and coursework tracking, which is something I love about the Davis School—it really can provide a sense of belonging and people that want you to succeed.”

During her junior year, while contemplating what to do after graduation, Pomatto took the undergraduate Biology of Aging course led by USC Leonard Davis School Vice Dean and James Birren Chair in Gerontology ­Kelvin Davies. He subsequently offered her a spot in his lab as an undergraduate researcher.

“I guess he didn’t mind all the questions I asked him in class,” she jokes. “Since than I have really enjoyed the mentorship and guidance he has offered throughout my PhD, especially his push to foster independence in his graduate students, which I think has offered me a skill set that is very unique and will be beneficial to my future endeavors.”

Pomatto graduated with undergraduate degrees in both Human Development and Aging and Biomedical Engineering in 2011; beyond the demanding double major, the hardworking student also competed as a member of USC’s varsity rowing team. She on to receive a Master of Science in Medical Device and Diagnostic Engineering at USC in 2012 before enrolling in the PhD in Gerontology program. Upon its creation, she transferred to the PhD program in the Biology of Aging, a joint offering between the Davis School and the Buck Institute for Aging Research in Novato, Calif.

“I thought joining the Biology of Aging program a wonderful opportunity,” Pomatto says. “As the Davis School is the leader in the U.S., and potentially the world, for having a collection of such high caliber academics in both the social and biological sciences, it is an amazing opportunity to be the first student to graduate from this flagship program.”

With Davies, a pioneer in the study of free radicals and oxidation, as her mentor, Pomatto’s doctoral research examines fruit flies and how their sex and age affect their ability to adapt to oxidative stresses that can damage proteins, lipids, and DNA. Specifically, her work analyzes two proteins that degrade damaged, oxidized proteins to help cells continue to function: the mitochondrial Lon protease and the cytosolic 20S proteasome.

To look at an organism’s ability to cope with oxidative stress via adaptation, she treats fruit-flies with a low amount of an oxidant, hydrogen peroxide, which will not kill the organism but can activate the genes and proteins that are necessary to protect the cell against oxidative stress. Following this activation phase, the flies are treated with a semi-lethal amount of the oxidant, and survival is measured.

“Young flies pretreated with the adaptive amount of hydrogen peroxide survive longer than their counterparts that were not pretreated upon exposure to the challenge dose,” Pomatto says. “However, only females show this phenomenon—males, regardless if they are pretreated or not, show no change in survival. Also, I have looked at the age-related changes in adaptation and found that with age, fruit flies lose the ability to show an adaptive response.”

This is important as our cells are continually dealing with various forms of oxidative stress, Pomatto explains, adding that the female-specific bias in activation of the stress response is particularly interesting. “This phenomenon may potentially contribute to the differences in lifespan that we see in ourselves, as females typically outlive males,” she says.

As she prepares for graduation and contemplates what she’ll do next as a researcher, Pomatto encourages other current and future USC students to ask their own questions and take active roles in research if they’re interested.

“Due to my own positive experience as an undergrad at USC, I really wanted to pay it forward, in sense that I aim for all the undergraduate students I work with to have a positive experience in the lab environment,” she says. “I have worked with eight undergrads, ranging from gerontology to biomedical engineering majors, and in each case, I think it’s really important that they ‘own’ a portion of a project, and that their work actively contributes towards a publication. I also think it’s really important that they have every opportunity to apply to not only the undergraduate research fellowships at USC but to also practice sharing their work at the USC undergrad research symposium and conferences.”