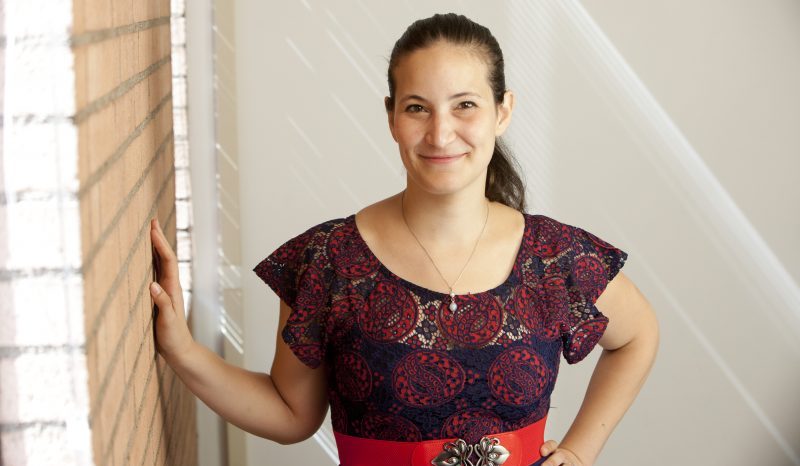 Bérénice Benayoun, newly appointed assistant professor at the USC Leonard Davis School of Gerontology, explores the role of epigenetics—the ways that genes turn “off” or “on”—in the process of aging, and she hopes her findings could eventually help delay frailty and prolong healthy life.

“Very little is known about how the epigenome is remodeled and how this remodeling could actually influence the aging process,” Benayoun says. “What’s really cool about epigenetics is that the modifications are reversible. Once we understand what goes wrong, we could possibly reverse it. The absolute ideal would be that we’re one day able to rejuvenate the genome and thus rejuvenate the organism.”

Benayoun, a native of Paris, France, was interested in genetics and epigenetics from a young age. During her undergraduate biology program at École Normale Supérieure in Paris, a mentor recognized her interests and referred her to Northwestern University Professor Richard Morimoto, a molecular biologist, for a three-month summer internship in his laboratory in 2005.

Working with Klaus Richter, then a postdoctoral fellow in Morimoto’s lab, Benayoun spent the summer researching the impact of a Forkhead box (FOX) gene, which is responsible for creating proteins that bind to DNA and control gene activity, in the worm species C. elegans on protein homeostasis. With a deep survey of the literature on the role of FOX genes, Benayoun learned about their link to the regulation of aging process. Her interest in pursuing aging biology research was sparked in earnest. She returned to Paris and pursued a master’s degree with a major in aging biology.

“[The program] was still pretty new in France; it was really amazing,” she says.

As she finished the program, one of the members of her thesis committee, Paris Diderot University Professor of Functional Genomics Reiner Veitia, invited her to join his lab as a PhD student. His laboratory focuses on ovarian development and pathology, and he appreciated Benayoun’s interest in FOX proteins; the FOXL2 protein in particular is known to be active in the ovaries.

“[Veitia] was working more on the developmental side of what FOXL2 does, but I had a bet with him that FOXL2 had an impact regarding ovarian aging because mice with a FOXL2 mutation develop some sort of premature menopause, and humans with mutations can have premature menopause as well,” Benayoun says. “He said, ‘OK, I’m giving you six months; if you find something you can continue that for your whole PhD. Otherwise you can go back to ovarian development.’ I was pretty sure I would find something, and I did,” she said.

Following her PhD, Benayoun completed a postdoctoral fellowship at Stanford University with Anne Brunet, professor of genetics and co-director of the Paul F. Glenn Laboratories for the Biology of Aging. Benayoun had become familiar with Brunet’s work in epigenetics and aging after her undergraduate internship at Northwestern and was thrilled to join her team. Building on her PhD research about the regulation of menopause, her postdoctoral research findings in the evolution and genetic architecture of male and female lifespan further piqued her curiosity about not only the epigenetic factors affecting aging but also how epigenetics and aging differs between the sexes.

“Something I’m very interested in is to try to understand what makes aging different between females and males. We know there are a lot of differences: women are in better health than men on average before menopause, but afterward women are less healthy and get more neurodegeneration and osteoporosis,” she explains. “If we could understand all this and bring the healthier state of the female epigenome to men and preserve it in women, it could be instrumental in treating aging… The dream would be to reduce the period of life where people are frail and diminished.”

Benayoun’s research shares commonalities with that of her senior faculty mentor, Professor Christian Pike, an expert in sex hormones and their roles in aging, and she looks forward to collaborating with both her USC Leonard Davis School colleagues and other researchers throughout USC.

“I’m excited and a bit terrified to join USC,” she laughs. “It sounds like it’s going to be an amazing environment.”