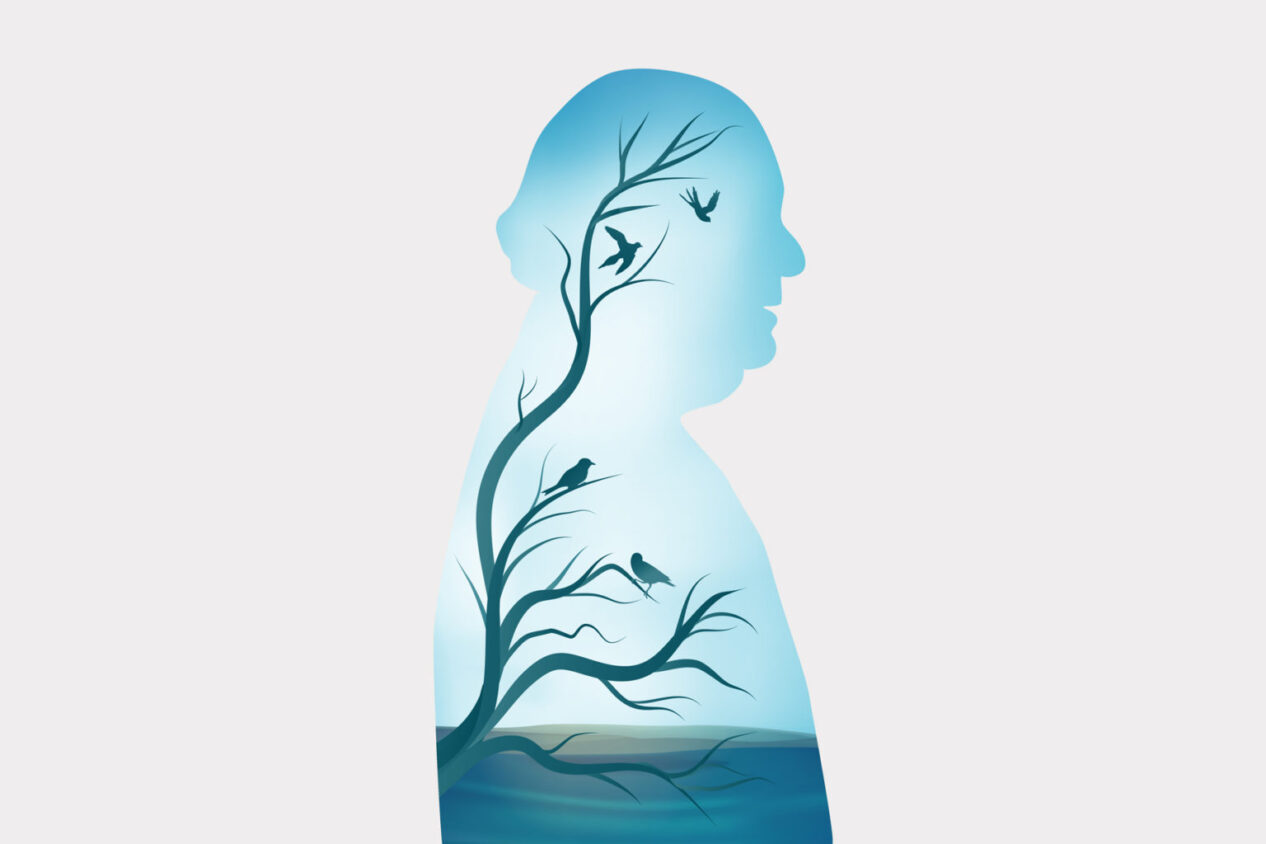 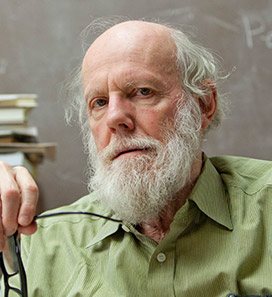 Against a backdrop of disappointing Alzheimer’s disease clinical trial outcomes, two researchers are proposing a new approach for future study of the disease.

Caleb Finch of the USC Leonard Davis School of Gerontology and Alexander Kulminski of the Social Science Research Institute at Duke University have outlined a framework called the Alzheimer’s Disease Exposome to address major gaps in understanding how environmental factors interact with genetic factors to increase or reduce risk for the disease. The theoretical article appears today in Alzheimer’s & Dementia: The Journal of the Alzheimer’s Association.

“We propose a new approach to comprehensively assess the multiple brain-body interactions that contribute to Alzheimer’s disease,” Finch said. “The importance of environmental factors in gene-environment interactions is suggested by wide individual differences in cognitive loss, particularly among people who carry genes that increase the risk of Alzheimer’s disease.”

The two classes of Alzheimer’s disease genes are considered in the exposome model. One class called familial Alzheimer’s genes are dominant, meaning someone who inherits those genes will ultimately develop Alzheimer’s. The other class include gene variants like apolipoprotein E4 (APOE4), where risk increases along with more copies of the genes. Among carriers of APOE4, a few people reach age 100 and older without ever developing the disease – demonstrating environmental risk is contributing to that variability.

The researchers provide an “under-appreciated” example of a study that showed the onset of dementia was a decade earlier for carriers of a dominant Alzheimer’s gene living in cities and who came from lower socioeconomic backgrounds or less education.

“Environmental factors including exposure to air pollution and low socioeconomic status shifted the onset curve by ten years,” explained Finch. “It’s in the research literature but until now, no one has paid sufficient attention to it.”

More recent examples come from Finch’s recent research on the gene-environment interactions between parasitic infections and the Alzheimer’s risk gene APOE4. Among a pre-industrial tribe of Bolivian people called the Tsimane, the presence of the gene along with chronic parasitic infections seemed to lead to better, not worse, cognition. Finch says the startling results provide an example of how the exposome concept could lead to enhanced understanding of risks for dementia.

“Those are just some of the environmental interactions we have brought up in building a larger framework called the exposome, that lists the different types of environmental factors that are known to interact with Alzheimer’s, but haven’t been studied broadly for how they impact the Alzheimer’s-linked genes,” Finch said. “This is the story of the gene-environment interaction.” 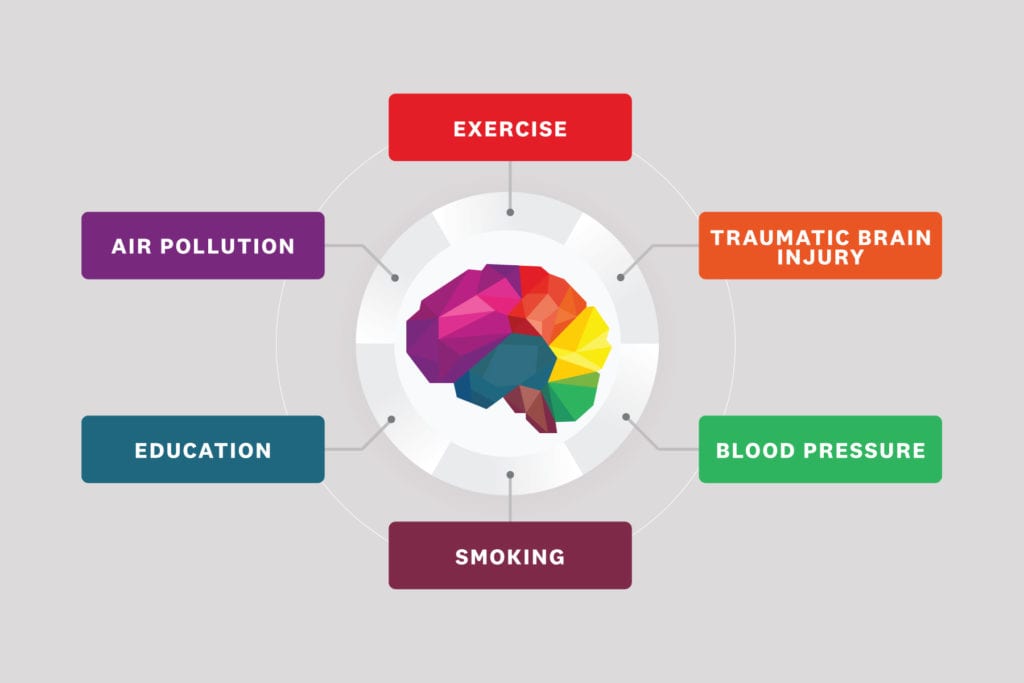 The Alzheimer’s Disease Exposome addresses major gaps in understanding how environmental factors interact with genetic factors to increase or reduce risk for the disease (Illustration/USC News).

The exposome concept was first proposed by cancer epidemiologist Christopher Paul Wild in 2005 to draw attention to the need for more data on lifetime exposure to environmental carcinogens. The exposome is now a mainstream model, eclipsing previous characterizations of environmental factors as affecting risk “one by one.”

“Epidemiologists have been using the exposome to have a broader outlook for whether they’re studying, whether it’s lead toxicity or head trauma,” Finch said.  “It’s our point that a number of things need to be considered for interaction and many effects are additive.”

The authors say the exposome concept extends and leverages the National Institute on Aging/ Alzheimer’s Association Research Framework—a consortium that follows clinical cohorts by brain imaging for biomarkers to assess neurodegeneration—to include gene-environment interactions across individual age and duration of exposure.

The proposed AD exposome includes macrolevel external factors such as living in rural versus urban areas, exposure to pollution and socioeconomic status, along with individual external factors such as diet, cigarette smoking, exercise and infections. This external or exogenous domain overlaps and interacts with internal or endogenous factors including individual biomes, fat deposits, hormones, and traumatic brain injury, which has been observed in professional boxers who develop Alzheimer’s.

“Analysis of endogenous and exogenous environmental factors requires consideration of these interactions over time,” Finch said.

The researchers assume that some interactions can change factors of the exposome; describing, for example, a “lung-brain axis” for inhaled neurotoxicants of air pollution and cigarette smoke, and a “renal-cardiovascular disease-brain axis” for renal aging driven by diet and hypertension. Each of these axes may have different gene-environment interactions for each risk gene.

The future of Alzheimer’s research

Many studies are looking at conditions such as heart disease, stroke, high blood pressure, obesity and diabetes with the goal of understanding of how reducing risk factors for these conditions could reduce the risk of Alzheimer’s disease. Additional research—including studies where Finch is the co-principal investigator—examines how urban air pollution contribute to accelerated brain aging and dementia risk.

The authors note that large-scale initiatives such as UK Biobank and “All of Us” in the United States are generating mega-cohorts; these massive data will make possible new methods to examine interactions of multiple factors in the exposome. In addition, new computational approaches to these multi-level complexities may identify interventions for individual brain aging.

Another suggestion is expanding studies of other age-related disorders and aging to include cognitive aging and dementia, with the authors pointing out that multi-generational cohorts with extensive information are available for the Framingham Heart Study and the Long-Life Family Study.