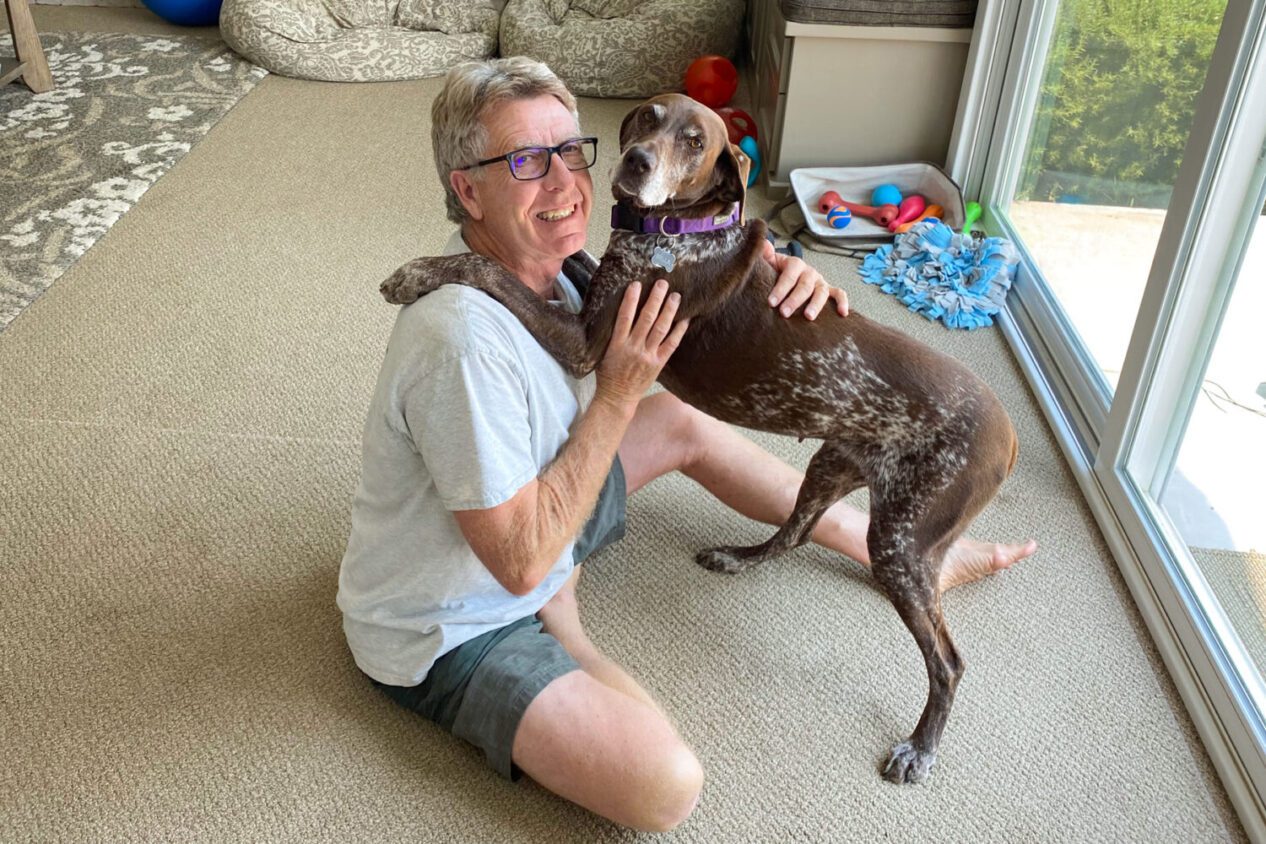 Professor keeps his students on their toes, especially when they’re learning at home

Home » Professor keeps his students on their toes, especially when they’re learning at home

At age 64, John “Old Doc” Walsh of the USC Leonard Davis School recognizes the need to stay limber — especially in the middle of a two-hour online class.

John Walsh describes himself as a “nutcase” who likes to surf giant waves.

“I’m a diehard surfer,” said Walsh, associate professor of gerontology and assistant dean of education at the USC Leonard Davis School of Gerontology. “I’ve traveled the world surfing, and I’m actually really good at it. To keep it going, though, I have to stay limber.”

It was surfing that led to an injury three decades ago, leaving Walsh, now 64, with what he describes as a massive herniation in one of the discs in his lower back. Four days later, he had surgery at Keck Hospital of USC.

“My physicians and my physical therapist told me, ‘Never stop surfing. The only thing that keeps you going is maintaining that core strength,’” he said.

Walsh developed his own stretching and core strength routine and has done it every day for 15 years.

When USC’s courses went online in the spring, Walsh made his routine a standard part of a break in the middle of the nearly two-hour class.

“The class is very clinical. It’s very dense biology related to the underlying causes of some fairly serious diseases,” he said. “I make this course like a second-year medical school course. I can tell when students are getting fatigued because their eyes are rolling back in their heads. That’s when it’s time to get on the floor.”

Walsh picks up his camera, moves to an open part of his living room and begins a stretching and strengthening routine that lasts about 12 minutes. Hamstrings, abdominals, lats, back muscles and his core all get some work.

“In person, Dr. Walsh is a crazy experience.”
Taj Mayfield

“Giving us this break gives us a burst of energy, and we’re able to step away from the screen for a little bit,” said Michelle Tashjian, who will graduate in the spring with a degree in human development and aging. “He’s really into it, he’s really fit and he’s always doing it super fast as we try to keep up.”

“He uses that break to put into practice some of the things we’re learning about,” said Aubrey Martinez, a neuroscience major headed for medical school. “One of the big components of this semester is learning how exercise can improve and reduce your risk of chronic diseases. He made a whole PDF manual as a guide, so we can do them on our own time with our family and friends. We lay out our yoga mats and we’re ready to go.”

“In person, Dr. Walsh is a crazy experience. You walk in when he’s starting the class and he’s playing old R&B,” Mayfield said. “Or we’re throwing balls around the room to illustrate the point. It all intertwines with the lesson of the day and makes seemingly boring stuff stick.”Taj Mayfield, a journalism major who took one of Walsh’s classes before the pandemic, said his online persona is much like the real thing.

“That makes her about 80 in dog years, but she acts like she’s 10 because she’s super fit and that’s what we’re trying to model,” Walsh said. “Bella could be our official gerontology mascot.”

Donning sunglasses and with a ball in hand, Walsh steps outside to his backyard pool. He tosses the ball in the water and Bella dives in after it. In seconds, she’s back on dry land, shaking off and ready for another dive. The demonstration of a dog defying the aging process is hard for students studying the science of aging to ignore.

Like everyone, Walsh looks forward to being back on campus, where he’s long been known for creating unique bonds with students that inspire them to keep going through the rigors of a pre-med track. When the pandemic restrictions lift, he may bring the stretching and strengthening into the auditorium:

“I’ve thought a lot about when we’re back in the classroom, can I continue to do this? I don’t see why not.”

This story was originally published on USC News.