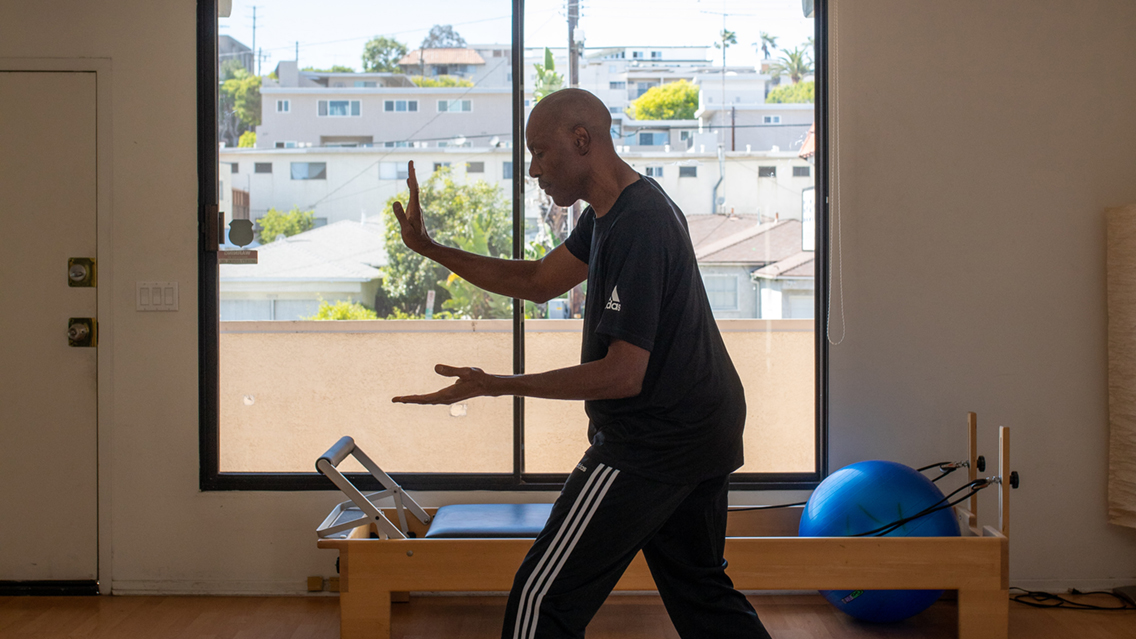 Victor Wilson helps older adults improve their strength, flexibility and balance. With a Master of Arts in Gerontology, he’ll take his mission of healthy aging through fitness to a new level. 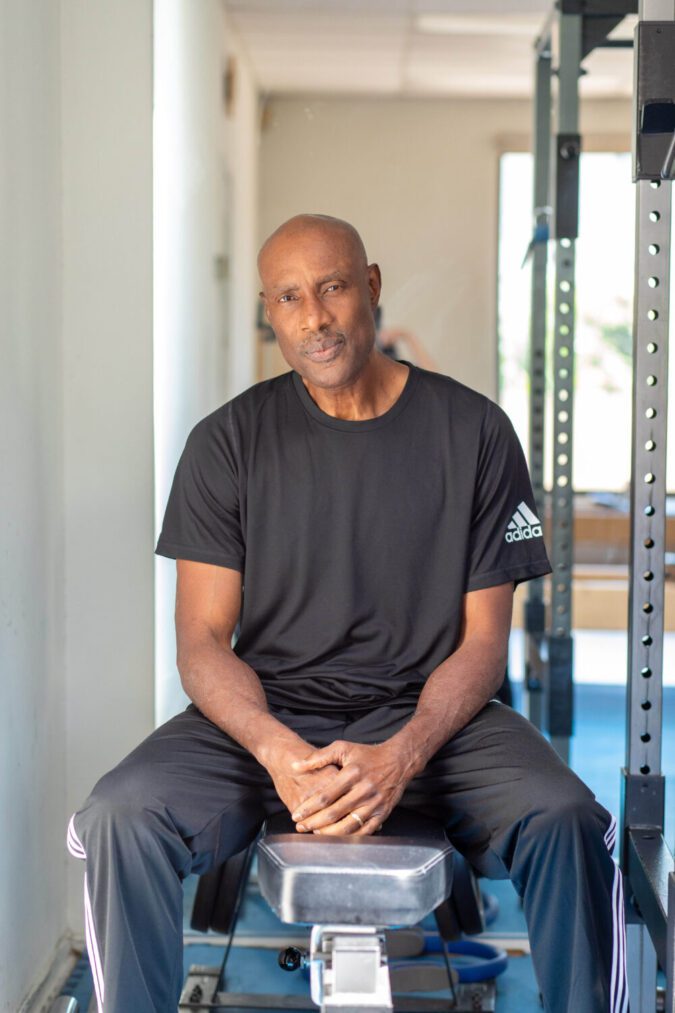 “As the population of older adults grows, the resources needed to care for them will increase. You can reduce this need if you prevent chronic conditions,” says USC Leonard Davis student Victor Wilson (photos by Stephanie Kleinman).

As a personal trainer and master’s student at USC Leonard Davis School of Gerontology, Victor Wilson focuses on aging and fitness. He says it’s critical to exercise as you age because you lose 40% of your strength between ages 50 and 80.

In his studio, most of Wilson’s clients are over age 50; his oldest client ever was 95. Wilson, who is 61, says he shares a connection with his older clients. “We have the same struggles and challenges with getting older. You can talk about a lot of different things with older adults because they’ve had more life experience,” he says.

Wilson believes the medical profession can do more to help people age in good health. He says, “They are more focused on curing diseases or treating problems rather than prevention. In Western medicine, the concept of mind-body wellness is missing.”

With an undergraduate degree in psychology and a master’s in kinesiology, Wilson felt his background could help fill the gap. First, he wanted to learn more about aging and to find a way to be of better service to his older clients. Gerontology seemed like a natural next step. And USC was where he wanted to be.

Mental and physical processes of aging

The gerontology programs at the USC Leonard Davis School study all aspects of aging. Professors introduce students to the biological, psychological, sociological, political, medical and business aspects of the human lifespan.

In his second semester of the Master of Arts in Gerontology program, Wilson is finding exactly what he was looking for. He says, “I wanted to get a handle on how the body changes, both mentally and physically as we age. I really want to be able to prepare my clients for what’s coming.”

A class that has been especially eye opening is “Mind and Body Connection Through the Lifespan.” Taught by Assistant Professor Paul Nash and Timothy Lu, Wilson says the class focuses on the physical and mental effects of chronic stress.

“I didn’t know how terrible stress was for you,” Wilson says. “Chronic stress can lead to inflammation, which affects every system in your body. It can lead to depression, anxiety, autoimmune diseases, diabetes and osteoporosis. I have clients who have these conditions, but I didn’t know stress intensified them.”

Aging is universal, but not all people experience this process the same way. Like many students at the USC Leonard Davis School, Wilson feels a deep concern about disparities among older adults.

“Most people can’t afford a personal trainer like me. I’ve always wanted to bring fitness training, especially Tai Chi, to older adults in low-income communities,” Wilson says. Tai Chi is a moving meditation that reduces stress and anxiety and improves strength and balance. It is an especially good exercise for preventing falls in older adults.

Wilson says, “My goal is to train Tai Chi instructors so they can go out into the community and help people.”

Wilson also sees a need among caregivers who are more likely to experience physical, emotional and financial stress. Currently, Wilson has an 84-year-old client whose caregiver and sister are often with her in the house. During his Tai Chi lessons, Wilson includes all three of them in the workouts. He sees this as a model to expand the reach of his services and the benefits that Tai Chi provides.

The USC Leonard Davis School positions students to solve real-world problems related to aging. For Wilson, that problem is seniors who don’t get enough physical activity. “As the population of older adults grows, the resources needed to care for them will increase. You can reduce this need if you prevent chronic conditions.”

Wilson isn’t waiting, though, to put what he is learning in the classroom into practice.

“I recently did a policy memo on physical activity guidelines. In doing that, I learned that only one in five adults over 18 are meeting the fitness guidelines. From age 65 to 74, this drops to 16%. From age 75 and up, only 10% are meeting the guidelines,” he says. “So, I’ve been talking to my clients about this and encouraging them to get moving and get their cardio minutes in.”

In the future, Wilson says he envisions expanding his business by creating partnerships and applying for grants. He’s also interested in consulting on disease prevention. The USC Leonard Davis School will give him the credentials he needs to do this.

What Wilson is not thinking about is retiring. Having grown up in Trinidad and Tobago, he simply doesn’t understand the concept. Among his seven siblings who still live there, none have retired. He says, “Especially in this field, I don’t see why I would even think of retiring. My work is benefiting me in every way.”

To learn more about Master’s degree programs at the USC Leonard Davis School of Gerontology, call us at (213) 740-5156.