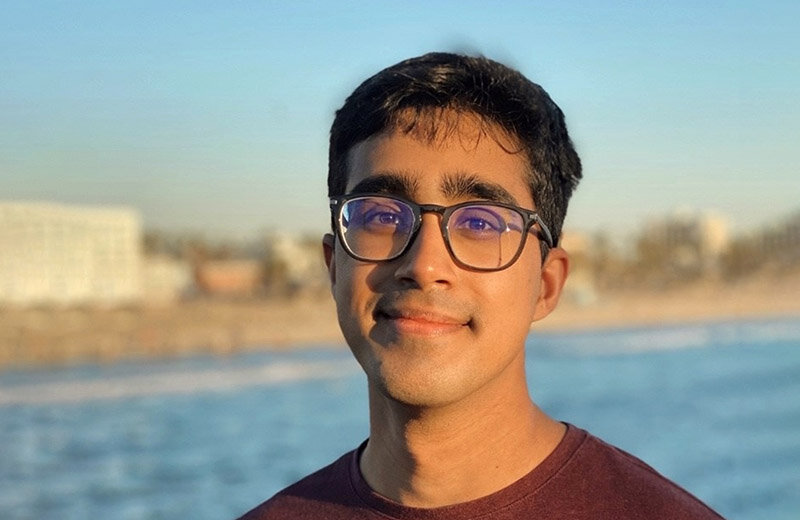 Ammar Dharani, junior in neuroscience at the USC Dornsife College and member of the Irimia Lab at the USC Leonard Davis School, researches the structural and connectivity changes following traumatic brain injury.

Neuroscience lies at the intersection of a variety of different fields, including biology, psychology, philosophy and even history, and studying the workings of the brain is useful as a context for understanding many of the larger issues in medicine and society, says Ammar Dharani, a neuroscience major at the USC Dornsife College of Letters, Arts and Sciences and member of the Irimia Lab at the USC Leonard Davis School of Gerontology. Dharani recently received a scholarship from the Barry Goldwater Scholarship and Excellence in Education Foundation.

“Neuroscience could be used to approach fundamental philosophical questions and societal issues involving free will, altruism and political polarization,” Dharani, a junior who is also pursuing a minor in history, says. During his sophomore year, Dharani added a history minor to his studies because, he says, it aided his scientific research, enabling him to “imagine alternative ways that people have understood the world.”

Dharani, who is originally from Lewisville, Texas, says he came to USC knowing he wanted to work in a laboratory, but he has found that keeping an open mind to different career paths has helped him explore areas he might not otherwise have considered.

“I highly recommend that every undergrad interested in research continuously communicate with his or her principal investigators and others in the lab. It is incredibly useful and will prepare you to apply for scholarships like the Goldwater, where you have to explain your research to somebody who may not have knowledge in your field,” he says.

Dharini’s research aims to track the structural and connectivity changes following traumatic brain injury and how these alterations may lead to Alzheimer’s disease.

“I am most interested in mapping the biological basis of complex behaviors and how they may be altered in neuropsychological disorders,” he says.

Outside of his research and classes, Dharani is a trip leader for the hiking club Peaks & Professors and a member of the Novus Think Tank, an organization that uses neuroscience research to promote social change both on the USC campus and in the Los Angeles community.

Dharani says he’s unsure whether he wants to practice medicine, conduct neuroscience research or do both. He is now looking into the physician-scientist (MD-PhD) track, as it would allow him to both solve problems through lab work and use that research to treat patients. He also wants to thank all of his past and present mentors, teachers and professors for guiding him on his educational path, especially Andrei Irimia, assistant professor of gerontology, biomedical engineering and neuroscience at the USC Leonard Davis School, and Robert Liu of Emory University.

“All of these wonderful people have challenged me while also giving me the freedom to develop my own research questions based on what I am interested in,” he says.

“His dedication and excellent strong work ethic is reflected in his excellent scientific output, which has been very prolific given his training stage,” Irimia said. “I have no doubt that Ammar has a very bright future ahead, and that his potential to make significant contributions to science and society are only matched by his passion and enthusiasm for scientific research.”

The U.S. Congress established the Barry Goldwater Scholarship and Excellence in Education Foundation in 1986 as a living memorial to Sen. Barry Goldwater just prior to his retirement from the U.S. Senate.