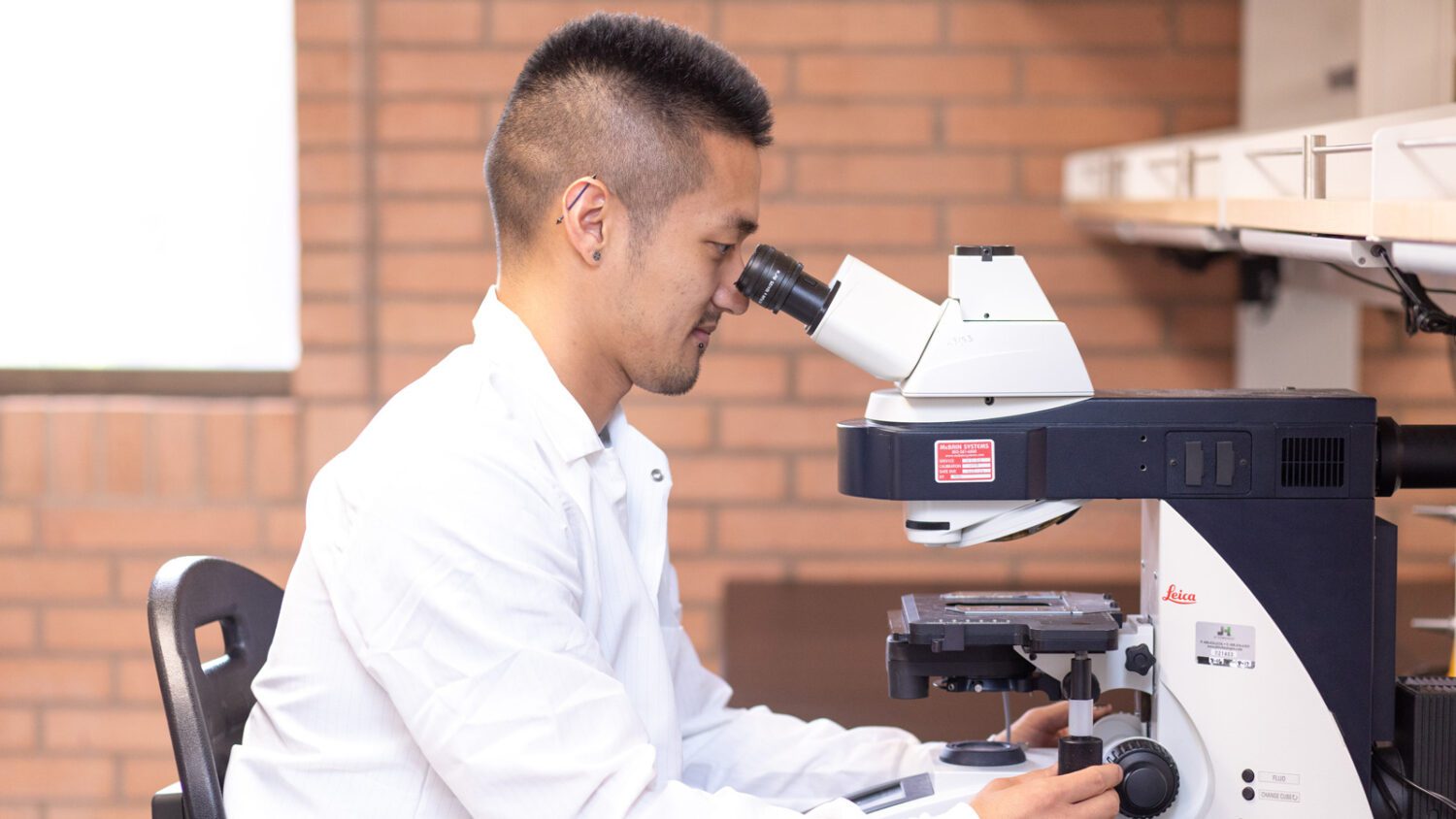 A recent study led by Assistant Professor of Gerontology Ryo Sanabria has identified a key protein that helps regulate the actin cytoskeleton, a scaffold of proteins within cells that makes their proper structure and function possible.

A review of genes both in the worm C. elegans and in human cells published in the journal Aging Cell revealed that the protein BET-1 promotes the proper function of actin, the protein that makes up the building blocks of the cytoskeleton. Overexpression of the gene for BET-1 appears to preserve actin function at later ages and improve health and lifespan in worms, according to the study.

Many of the cellular processes that depend on the actin cytoskeleton – from cell division to recycling damaged parts of the cell – deteriorate during aging and exposure to stress as the cytoskeleton breaks down. However, the regulatory mechanisms involved in preservation of cytoskeletal form and function are not well-understood, Sanabria said. With the cytoskeleton being necessary for numerous cellular functions as well as maintaining its very shape, understanding its regulation and how well it responds to stressors over time could shed light on many aging-related illnesses.

How stress and aging affect cells

“My lab has studied stress responses in three areas: the endoplasmic reticulum, which acts as a ‘factory’ for proteins, lipids, and other molecules within the cell; the mitochondria, where cells’ energy is produced; and the actin cytoskeleton, which helps cells keep or change their shape as needed,” Sanabria said. “Each of these systems has unique ways to respond to stress and maintain their health and function.”

“When you’re stressed, what’s your capacity to bounce back? The more you can recover from a stressor, the healthier you are, but with aging there is less response and recovery,” Sanabria explained. “But if you take a young person’s stress resilience and give it to an older individual, will they be healthier?”

Sanabria’s quest to understand how stress and aging impact cellular structures, including the actin cytoskeleton, have been recognized with recent grants supporting their work from the Larry L. Hillblom Foundation, the Glenn Foundation for Medical Research/American Federation for Aging Research, and the Navigage Foundation.

The Hillblom Start-Up Research Grant will provide Sanabria a total of $210,000 over a three-year period to study how the actin cytoskeleton interacts with cells’ energy-producing mitochondria during stress and aging. The organization’s Start-Up grants were designed to help newer scientists begin their independent research careers. Sanabria arrived at the USC Leonard Davis School as an assistant professor in 2021 following a postdoctoral fellowship at UC Berkeley.

Sanabria also received a 2022 Junior Faculty Research Grant from the Glenn Foundation for Medical Research/American Federation for Aging Research in support of their work regarding stress and aging, especially in the endoplasmic reticulum. An organelle known for producing proteins, lipids and other molecules, the endoplasmic reticulum’s unfolded protein response is an important mechanism in preserving healthy protein structure in the face of toxic stress. The $125,000 grant supports Sanabria’s research into how hyperactivating this protective response in specific neurons within the brain can affect health and longevity, which could help identify which neurons are responsible for sensing stress and coordinating the body’s response to it.

In addition, Sanabria has received a $100,000 award from the Navigage Foundation to translate their studies into Alzheimer’s disease. Since they have found that promoting stress resilience is a potential method to increase longevity, the next question is whether it can also be used as a vehicle to combat age-related diseases, Sanabria said. With the support of the Navigage Foundation, Sanabria is investigating whether those that have higher risks for Alzheimer’s Disease had inherently lower capacity to deal with stress and whether increasing stress resilience can actually mitigate the risk – and even slow the progression – of Alzheimer’s disease.