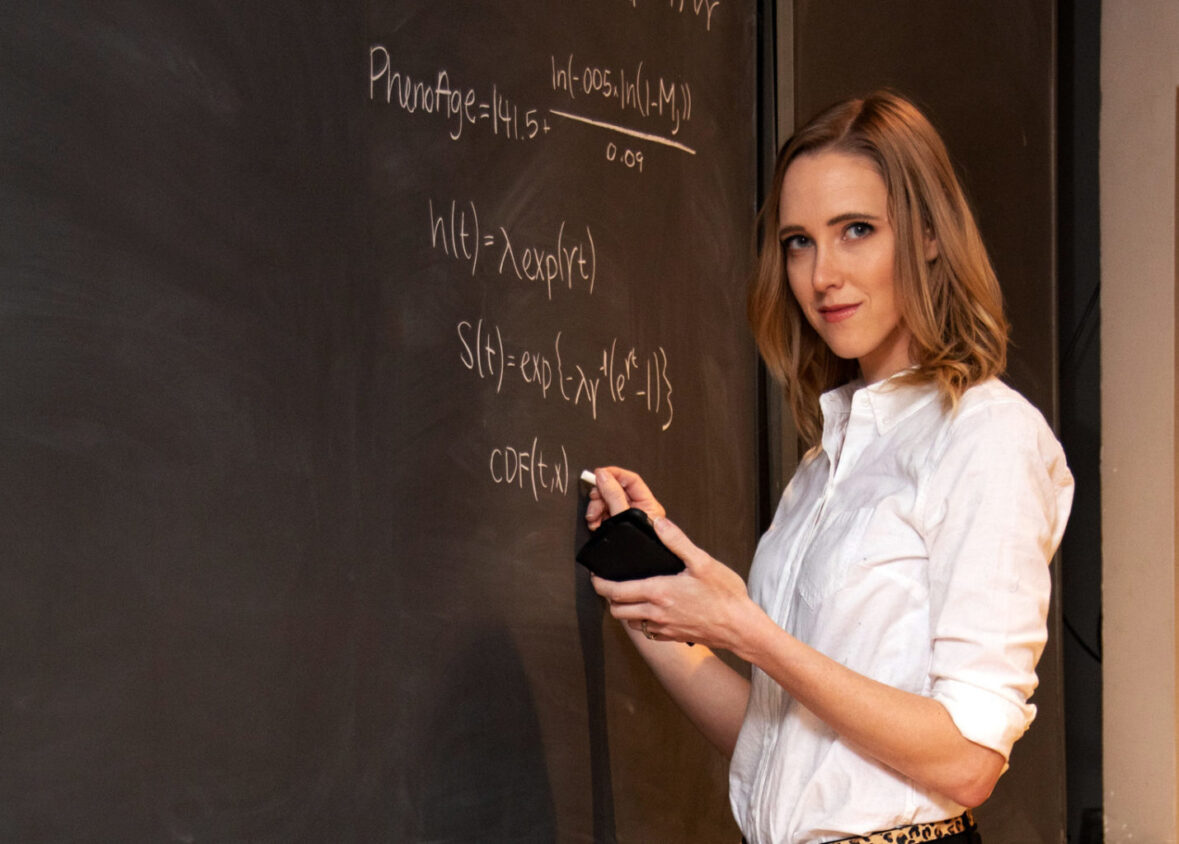 “I think of what I do as really trying to quantify the aging process,” says 2015 PhD in Gerontology graduate Morgan Levine.

Morgan Levine wants to know why some people live longer than others.

“How do people move from health to disability to diseases and mortality?” said Levine, a 2015 USC Leonard Davis School of Gerontology alumna.

Thanks to the research she began as a USC doctoral student and is continuing as an assistant professor of pathology at Yale University, Levine is starting to close in on some answers. In the process, she’s changing our understanding of what aging is and how it’s connected to a range of diseases.

Levine’s work attempts to separate chronological age from the body’s biological age. Her research has developed a biomarker — one single, calculated value — that correlates with age in every tissue of the body and is predictive of many, if not most, causes of mortality. In other words, if aging is a continuum, someone far enough along that continuum will be likely to struggle with cancer or heart disease or Alzheimer’s, or any number of other diseases associated with mortality — no matter how young or old that person is.

“I think of what I do as really trying to quantify the aging process,” she said. “On a biological level, what things change with age, and can we then map or track where an individual is in that process, aside from [his or her] chronological age?”

At the moment, this is purely information for scientists, but Levine imagines that one day it can be part of a regular physical exam. “That’s hopefully where we’re headed,” she said.

Levine said she is also working with a few companies — including L-Nutra, founded by Valter Longo, the Edna M. Jones Professor of Gerontology at USC — to develop websites where people can type in test results from a physician’s visit and be given a prediction of a median life expectancy. The sites would also tell them how much longer they could expect to live if they reduced one or more of their problematic test results. “So it’s kind of a fun, interactive thing,” she said.

Levine could be said to have geronotology in her own genes — her mother is Kathleen Wilber, the Mary Pickford Foundation Professor of Gerontology at the USC Leonard Davis School of Gerontology. But when Levine first enrolled at USC as an undergraduate, she was determined to set her own course, planning to major in premed. Soon, though, she switched to psychology, because she wanted to do research.

After graduating in 2008, she spent a year working with horses, training them for professional jumpers. She quickly found she itched for more intellectual fulfillment and enrolled in a master’s program at the USC Leonard Davis School of Gerontology, thinking it would be an entry into the health care field that had long attracted her. But she realized that, like her mother, she enjoyed academic research, and soon she was pursuing her PhD.

“What I loved about research is you can think up any interesting question and have the tools to go out and answer it,” she said.

It was while she worked toward her degree that Levine started down the path she’s currently on, studying the biomarkers of aging. Her mentor at the time was Eileen Crimmins, the AARP Chair of Gerontology at USC. The two scientists continue to collaborate on research today.

“Morgan’s a star,” Crimmins said. “She’s smart, she works hard, she writes well, she gets it.”

Where other students might wander off into research tangents or agonize over the wording of a thesis or paper, “[Morgan is] very fast at grasping things and very direct at writing them,” Crimmins said. “She doesn’t get lost in the weeds.”

As she dove deeper into the world of gerontology and science, Levine found her passion at the nexus of computers and biology. Her lab at Yale is what’s called a “dry lab” — it contracts with “wet labs” to get data they collect, then analyzes the data using computers. Levine’s research also uses data gathered by health surveys that stretch over years, or even decades, returning to the same patient population to ask questions and gather information.

“I’ve always been very interested in statistics and research methods and the power that gives you for answering questions,” she said.

Since her days as a doctoral student, Levine has been trying to find a way to chart and predict aging in individuals. What she didn’t think she would discover, as she did in her lab in 2016, was one single marker for the entire process. “That was the biggest ‘whoa’ moment,” she said. “Statistically, the results I was getting were so strong, I was just amazed that it happened.”

Currently, Crimmins and Levine are part of a team analyzing results from a multi-decade study of 20,000 adults ages 50 and over across the United States. That the study itself exists is due to the doggedness of Crimmins and others like her, who believed 15 years ago that future scientists would find uses for the data.

They began “first by convincing people that it could be done, and that it should be done, then getting the money to do it, then doing it — it’s been a long, long road,” Crimmins said.

And just as Crimmins predicted a decade and a half ago, here, among others, is Levine, an eager recipient of the data. “She will be a beneficiary,” Crimmins said, “but we’re a beneficiary of her working on it.”

Describing what’s in the data, Levine sounds like a child listing the goodies she got for her birthday. Not only did researchers collect socioeconomic and behavior data, she said, but “for me, the exciting thing is we have their genetic data, their epigenetic data, their gene expression and a bunch of other biological data, such as mitochondrial functioning and a whole inflammatory panel as well.”

With this information, Levine wants to learn why one individual ages faster than another, and why some people are at higher risk for disease and mortality at younger ages.

She’s also hoping to one day be able to break down aging organ by organ. “Something we’re interested in is what if, say, you have an old heart, but a younger liver, and old lungs?” she said. “What does that mean for your risk of different outcomes?”

In the meantime, she keeps busy not only overseeing her lab, but riding horses, running even in the New England winters, and chasing after her three-year-old daughter. Her husband, Zachary Levine, is a scientist who works in physics research at Yale.

Although Levine initially resisted following her mother’s academic path, she now cherishes the extra bond they share. “I thought I wanted to be distinct from her,” she said. “But then, having that sounding board was really nice. And I felt there was a whole other level I could relate to her on.”

Wilber’s research focuses on improving health outcomes and quality of life for vulnerable elders; Levine hopes her own discoveries will keep elderly people active and vital for longer. It’s the quest that gets her up in the morning and that rivets her to her computer, numbers and scientific terms scrolling by.

“My favorite thing about studying aging is that there are so many questions,” she said. “It’s constantly evolving. We will never run out of questions.”

This article originally appeared in the spring 2019 issue of Vitality magazine with the title “A New Age.” Photo by Kate Henderson.