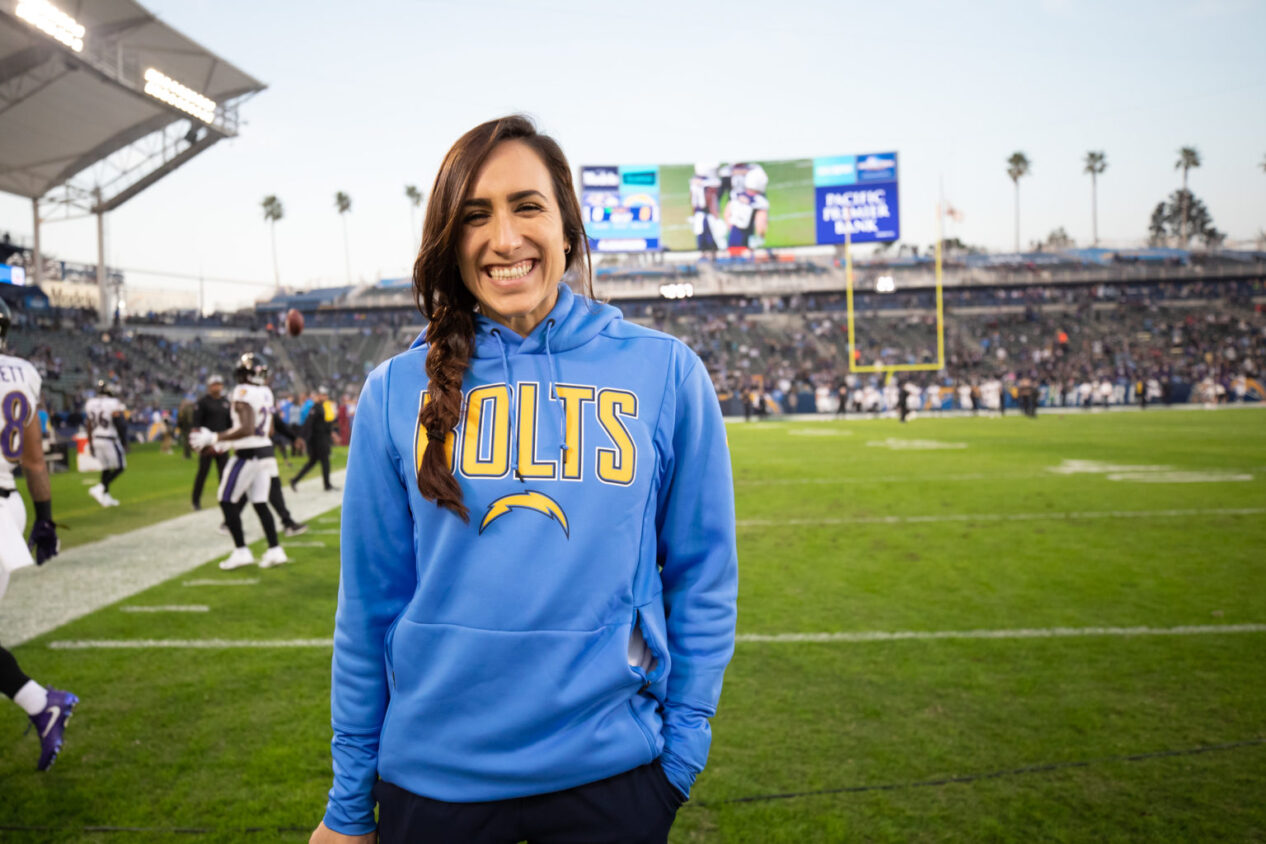 Helping NFL Players Fuel Up for the Field

Home » Helping NFL Players Fuel Up for the Field

Erica Capellino ’15, MS ’17 wants only the finest food, wherever she goes. She tracked down the best clam chowder in Boston, the highest-quality barbeque in Kansas City. But not for herself—for the Los Angeles Chargers football team.

At 26 years old, Capellino is the team’s first-ever full-time dietitian and one of less than two dozen in the entire NFL. Thanks to her, meals and snacks and drinks for the players are not simply food—they are fuel for bodies that require optimum performance.  Take for instance that KC barbeque. She directed that the chicken wings be baked, not deep-fried. And she searched out local sauces that weren’t saturated with high-fructose corn syrup.

“I had to make sure the nutritional density was there,” said Capellino, who completed both her bachelor’s in human biology at USC and her master’s at the Leonard Davis School of Gerontology.

As team dietitian, her work schedule rivals the players for intensity, though it outdoes them in sheer hours. Capellino rises during the season at 3:30 a.m. so she has time for her own meal and workout before heading over to the players’ breakfast at 6 a.m. From then until sometimes as late as midnight, seven days a week in-season, she oversees breakfast, lunch and dinner for the team; makes sure the players have adequate snacks (or “fuel”) before, during and after workouts; and also monitors the players’ hydration. She watches out for snafus, like the time she asked a hotel kitchen for peanut butter and jelly sandwiches for lunch, and the staff made two types of sandwiches: a peanut butter sandwich, and a jelly one.

And always, always she makes sure the players have choices, like an array of food and smoothie items at breakfast, or half a dozen protein bars at the ready during workouts.

“Food and nutrition is so personal,” she said. “What tastes good to you doesn’t necessarily taste good to someone else.”

One reason she’s been able to gain the players’ trust, she said, is because she too is an athlete—Capellino ran cross-country and track for the Trojans as an undergraduate. It was there, in the athletics department in 2012, that she ran into Becci Twombley, who had just arrived at USC to launch the school’s sports nutrition department. Capellino was immediately captivated by Twombley’s work.

“Being an athlete, I was always trying to find ways to better myself,” she said. “Anything I could do to gain a competitive advantage was interesting to me.”

She volunteered to help the dietitian, and she ended up working with her for five years while an undergraduate and then again while pursuing a Master’s of Science in Nutrition, Healthspan and Longevity. One of her favorite classes in her master’s program, on the interplay between genetics and health, informs her work on nutrition today.

“I made that one of my core values: to optimize the athlete’s genetics and their potential as much as I can, and make things as individualized and personalized as I can,” she said.

She does have a few rules, though, for athletes as well as ordinary people: half of your plate should be fruits and vegetables, she said; one quarter of it carbohydrates; and only one quarter protein. Also, after a workout, she recommends chocolate milk.

“It’s carb to protein ratio is 3-to-1,” she said. “Chocolate milk after a workout is one of the best foods you can use.”