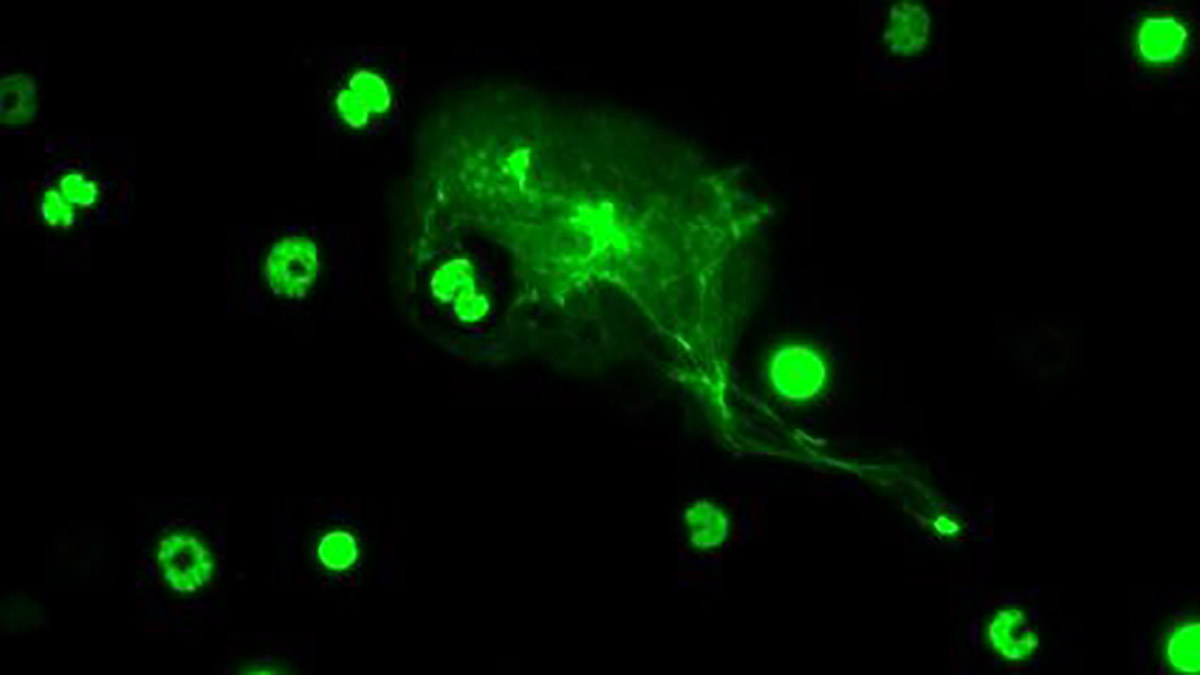 How short-lived neutrophils respond to pathogens appears to vary greatly between the sexes and with age, says Bérénice Benayoun.

A new USC study of a common, yet poorly understood type of white blood cell reveals the human immune cell’s response to pathogens differs greatly by sex and by age.

In this mouse study, males proved much more susceptible to a condition called sepsis than females. However, the scientists also found that the female disease-defense system is hardly perfect; their system changes with age to become nearly as harmful as the males’.

Those are the key findings in a study that appeared July 19, 2021 in Nature Aging.

The study has important implications for studying disease and cures, especially for sepsis, a condition in which the body’s defense system turns harmful to itself. It also suggests that the quest for precision medicine may be overlooking more obvious disease determinants: age and sex.

“A big take-home message is that with the push for personalized medicine, people focus on minute genetic differences, but we find that biological sex – the biggest genetic difference of all – is actually a great predictor for immune response seldom taken into account,” said Bérénice Benayoun, assistant professor at the USC Leonard Davis School of Gerontology and principal investigator of the study.

Benayoun and her team focused on cells called “neutrophils,” which make up about 50% to 70% of our white blood cells and are critical to fighting off infections. Understanding sex- and age-based differences in how neutrophils function could help us understand similar disparities in human illnesses, such as why older people — and men in particular— are more likely to get severe symptoms with COVID-19 or why women are more likely to have autoimmune disorders, she added.

Neutrophils respond to infections in a few different ways, such as by engulfing and “digesting” an invading pathogen—or by degranulation in which they secrete proteins that destroy the invader.

Another method discovered in 2004 is “NETosis,” in which neutrophils expel strands of their own coagulated DNA, called chromatin, which act as a trap outside of the cell. These neutrophil extracellular traps, or so-called “NETs,” ensnare and destroy pathogens.

Benayoun and colleagues discovered differences in neutrophil activity between young and old mice, as well as between male and female mice. Males appeared to have more degranulation activity, as evidenced by higher levels of a protein, neutrophil elastase. Meanwhile females exhibited more NETosis on average.

High degranulation activity can cause damage to surrounding tissues, and these findings could illustrate why sepsis affects men more than women, Benayoun said.

“With sepsis, what kills you is not actually the bacteria; it’s your response to the bacteria,” she noted. “And we know that males in general have much worse odds during sepsis than females, and neutrophil elastase, which is one of the main components of degranulation, is one of the big things that can be produced at very high level during sepsis.”

On the other hand, higher NETosis activity could contribute to the body’s immune system attacking healthy cells, Benayoun added. Antibodies targeting the body’s own DNA have been found in many autoimmune disorders, which could have been developed after neutrophils produced too many NETs. Thus, higher NET activity in females could be related to higher rates of autoimmune disorders in women.

“If you make NETs for no good reason, it can promote autoimmunity,” Benayoun said. “It’s a known fact that women are more prone to autoimmune disease, like a 9:1 ratio compared to men.”

Neutrophils have historically been difficult to study because they are so short-lived, lasting less than a day. The cells’ short lifespans are spent as the immune system’s first responders, working quickly to trap and destroy pathogens at the first sign of an infection and sacrificing themselves in the process.

To gather a comprehensive set of data on neutrophils and their activity, researchers purified neutrophils from the bone marrow of old and young female and male mice to decipher changes in neutrophil activity, gene expression, metabolism and more.

In addition, Benayoun and colleagues also used purified bacterial lipid molecules to induce a non-infectious sepsis-like response in young male and female mice. Over the course of several hours, they then took samples to measure each mouse’s response to the “infection,” specifically for neutrophil activation.

“To our knowledge, this dataset is the largest multi-omic dataset for the study of neutrophils, and we believe it will be a resource to the scientific community,” Benayoun said. “Specifically, it is one of the rare cases to include both sexes and organismal aging, rather than focusing on only one sex or one age group.”

Applying machine learning techniques to the data, the team has begun to identify genetic pathways involved in the regulation of immune response that could explain why there are such dramatic differences between the sexes, also called sex dimorphism, in immune system activity.

Sex dimorphism in immunity is exemplified in the current pandemic, with men representing the majority of severe cases and deaths from COVID-19, Benayoun noted. With other literature indicating a possible role of sex hormones in immune regulation, studying these interactions could lead to new techniques to fight severe illness.

“If these differences are driven by the hormonal effects on immune cells, then in theory, you could try to intervene in early sepsis, maybe with anti-androgens in the short term, to bring down the response,” Benayoun mused. “You could tailor medicine just by using the fact that this patient has more androgens or this person has more estrogen.”

This work was supported by a Diana Jacobs Kalman/AFAR Scholarships for Research in the Biology of Aging to Lu; GCRLE-2020 post-doctoral fellowship from the Global Consortium for Reproductive Longevity and Equality at the Buck Institute, made possible by the Bia-Echo Foundation, to Kim; NIA T32 AG052374 and NSF graduate research fellowship DGE-1842487 to Bravo; and NIA R00 AG049934, Pew Biomedical Scholar award #00034120, an innovator grant from the Rose Hills foundation, and the Kathleen Gilmore Biology of Aging research award to Benayoun. This work was also partially supported by NCI Cancer Center Support Grant P30 CA014089 through the use of shared resources. The authors acknowledge the Center for Advanced Research Computing at the University of Southern California for providing computing resources that have contributed to the research results.