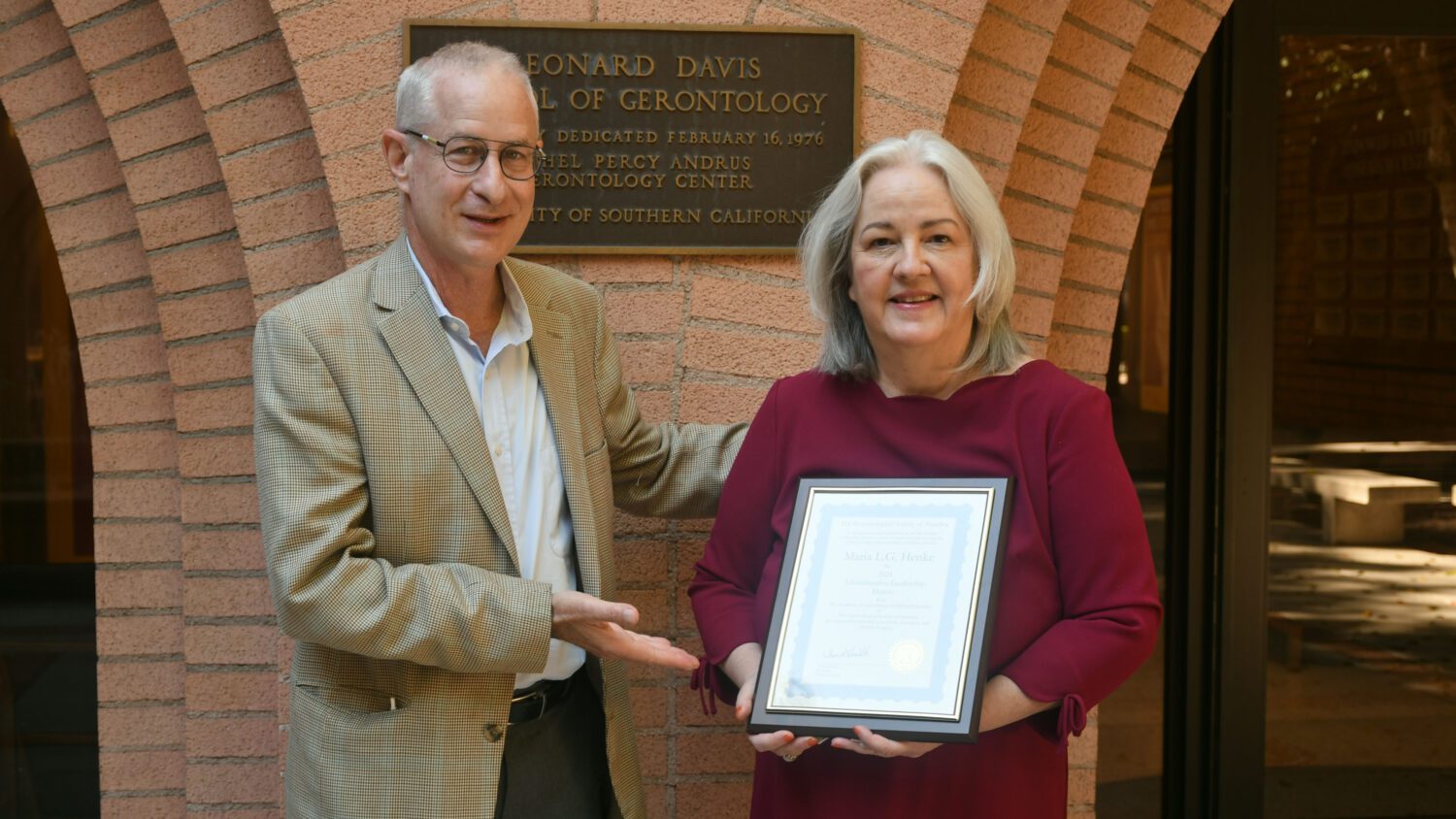 The Academy for Gerontology in Higher Education (AGHE) has named Maria Henke, Senior Associate Dean of the USC Leonard Davis School of Gerontology, the recipient of this year’s Administrative Leadership Honor.

The award recognizes administrators at AGHE member campuses who have made exceptional efforts in support of gerontology or geriatrics education, per the AGHE website.

“Over the last two decades, Maria has been an invaluable part of the USC Leonard Davis School of Gerontology, and her hard work, leadership, and creativity have been key factors in the Leonard Davis School’s tremendous growth in the past decade in particular,” wrote USC Leonard Davis Dean and Professor Pinchas Cohen, Executive Vice Dean and Distinguished Professor Kelvin Davies, and Dean Emeritus and Professor Edward Schneider in their nomination letter for Henke. “She is also an influential innovator in gerontology education, particularly online education, and a leading force in the wider gerontology field.”

Under Henke’s leadership, the USC Leonard Davis School pioneered one of the world’s first online courses in gerontology – also USC’s first-ever web-based distance learning program – as well as the first accredited online master’s program in the western U.S. The school now offers all 10 of its master’s programs both on-campus and online, and enrollment in USC Leonard Davis graduate programs has increased 13-fold within the last decade.

In addition to several USC gerontology degree programs, Henke has also led the creation of tailored gerontology education programs for outside organizations, including Bank of America Merrill Lynch and the American Society on Aging. In the wider field, she serves as a member of the American Society on Aging’s Board of Directors, has authored and co-authored several publications on gerontology education and distance learning, and is a past president of the California Council on Gerontology and Geriatrics.

“Being recognized for my leadership by AGHE is a great honor,” Henke said. “Gerontology has come a long way as an academic discipline, but we still have a lot of work to do and I am excited to be part of it.”

Henke, who also serves as co-director of the Ethel Percy Andrus Gerontology Center, has been a member of the USC Leonard Davis School staff since 1987. A USC alumna as well as a staff member, she received her Bachelor of Arts in Journalism from USC in 1984 and later received a Master’s in Communication Management in 2002.

“Maria not only believes wholeheartedly in the mission of the USC Leonard Davis School but also cares deeply about the members of our school community,” said Dean Cohen, who also received the AGHE Administrative Leadership Honor in 2016. “Her drive and creativity make our school a wonderful place to work and learn and keep us prepared for whatever the future of gerontology may bring.”