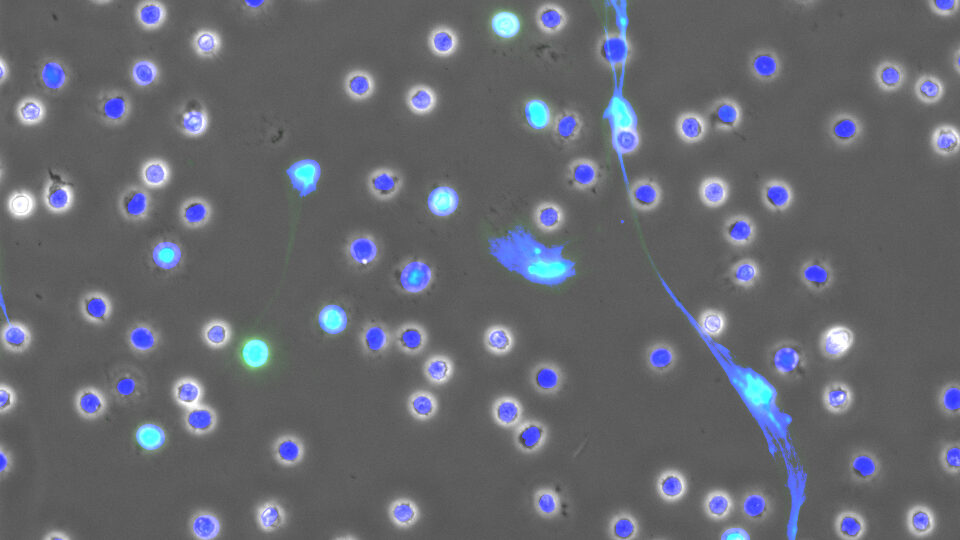 Cutting-edge RNA study of neutrophils at the single-cell provides vital groundwork for further investigation of how immunity differs based on sex.

The study, published online in Scientific Data in July, describes a robust set of data on the RNA expression of neutrophils, immune cells that act as the body’s first line of defense against pathogens, in young female and male mice.

“It’s actually a technical achievement first and foremost, because neutrophils are the most RNA-poor cell type that exists,” said Assistant Professor of Gerontology Berenice Benayoun, the study’s corresponding author. “And so we had to adjust the protocol to get it to even work, to profile neutrophils at the single cell level.”

Previous research from the Benayoun lab has illustrated differences in neutrophil function between males and females, as well as older and younger animals. However, the new study includes RNA expression information at the single-cell level, allowing researchers to see how different neutrophils in the same animal might have different expression patterns.

“The data set that we generated allows us to look at different subpopulations of neutrophils, which will allow us to get a better insight on the sex differences that we have already described in bulk analysis,” said Min Hoo Kim, postdoctoral fellow in the Benayoun lab and the study’s first author.

Understanding how neutrophil activity differs between sexes could be key to addressing many health issues in a more targeted way, the researchers said. Previous research has shown that in mammals, the immune system displays widespread sex dimorphism, or differences between males and females, including how males are generally more susceptible to and have worse outcomes for severe infections, while females are more prone to autoimmune diseases.

Some of these differences in immune responses may be connected to how the COVID-19 pandemic has affected men and women differently, Kim added. Benayoun and Kim are optimistic that their data will provide a valuable resource for other scientists to explore the underlying mechanisms behind sex differences in immune responses and examine the possibility of tailoring treatments based on sex-related immune characteristics.

In addition, it highlights the need for the scientific community to more thoroughly include sex as a research variable and make sure study populations reflect the real world, Benayoun said. Historically, biology researchers have tended to study mainly male populations, an imbalance that researchers and funders are now trying to address.

“This isn’t just about neutrophil biology,” she said. “I’m hoping that the more we show people that there are fundamental differences in processes that are completely unrelated to reproduction in females and males, the more people are going to look at it and leverage it to improve the health of everyone.”

“Single-cell RNA-seq of primary bone marrow neutrophils from female and male adult mice” was published online in Scientific Data in July 2022 and, along with Kim and Benayoun, was coauthored by USC Leonard Davis Biology of Aging PhD student Ryan Lu. This study was supported by GCRLE-2020 post-doctoral fellowship from the Global Consortium for Reproductive Longevity and Equality at the Buck Institute, made possible by the Bia-Echo Foundation to Kim, NIA T32 AG052374 predoctoral fellowship and a Diana Jacobs Kalman/AFAR Scholarship for Research in the Biology of Aging to Lu, and a Pew Biomedical Scholar award #00034120, an innovator grant from the Rose Hills Foundation, and the Kathleen Gilmore Biology of Aging research award to Benayoun.