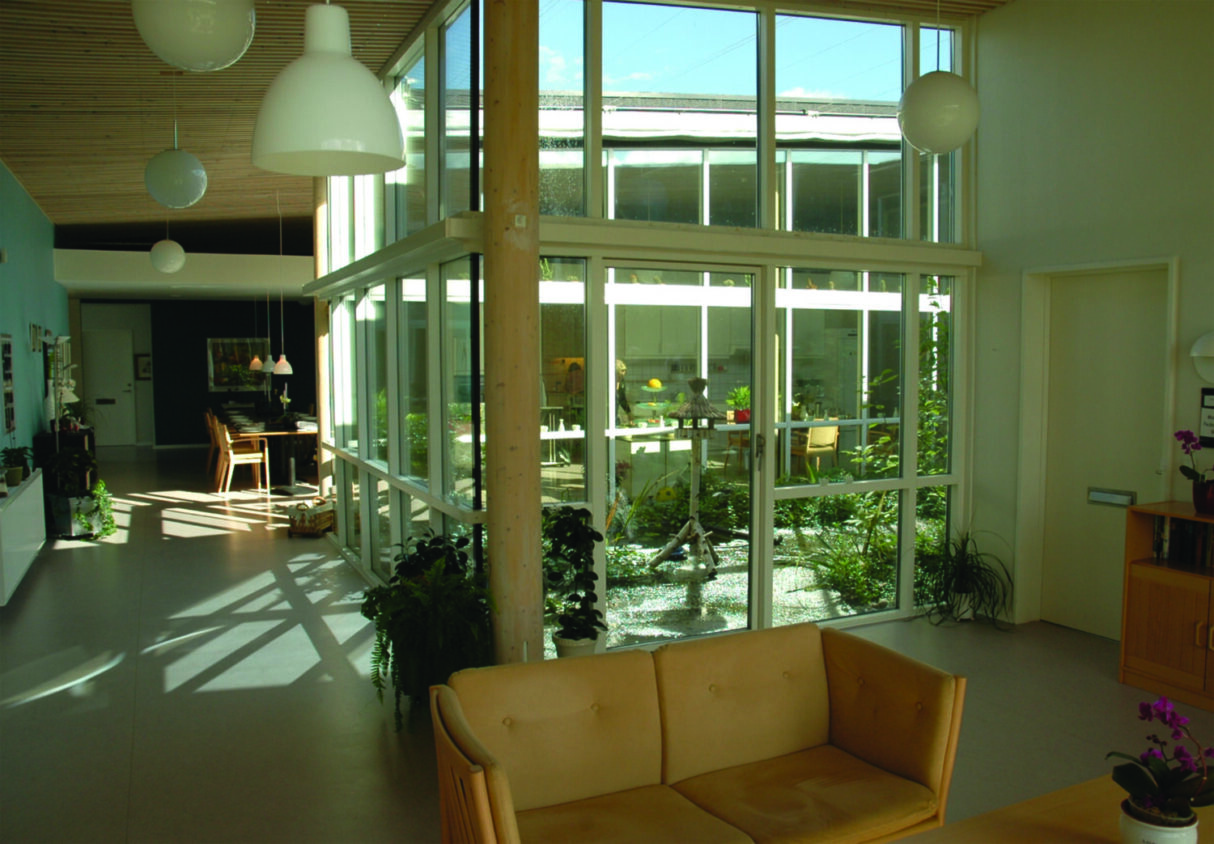 More important than ever during the COVID-19 pandemic, USC experts teach students how to design and operate senior living facilities that promote public health.

When Jim Biggs signed up to teach a course last spring on senior living management, he expected to create the curriculum.

He did not expect to be the curriculum.

Then, in early April, the coronavirus infiltrated the Chicago-area senior living complex where Biggs was the executive director, and the class Zoom meetings “turned into my weekly therapy sessions,” he jokes. He shared with the students, many of whom worked in senior living facilities themselves, everything that was going on at the Carrington at Lincolnwood, and the steps he and his staff were taking to solve the crisis. Ultimately, out of a total of about 240 residents, two residents in independent living, six in assisted living and seven in memory care were infected with COVID-19.

The students watched as Biggs and many members of his staff temporarily moved into the facility as a way to limit contact from the outside. They listened as he described how some staff members, terrified of getting ill, refused to come to work, forcing remaining nursing staff to take on double duty, with Biggs himself taking on added tasks such as dog walking and package delivery. He told students about his decision to give his cell phone number to the families of residents, and about the kinds of panicked calls he got, day and night, from relatives desperate for information about their loved ones.

“We shared with [the students] everything we were doing at the community,” Biggs said.

From administrators on the front lines to architects specializing in health care facility design, USC professors have spent the spring, summer and fall teaching the next generation of leaders the latest information about how to design and manage senior living facilities during a pandemic, even as they live it themselves. The process, sometimes as messy and contradictory as the science about COVID, has also been deeply relevant to the moment at hand. 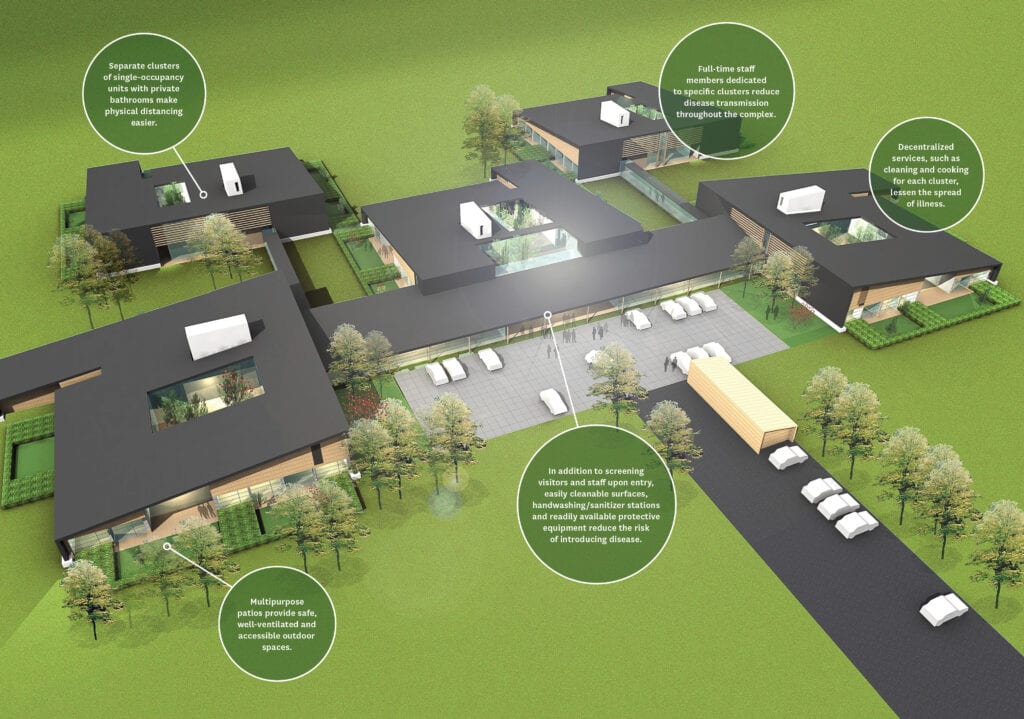 In the USC School of Architecture, Professor Victor Regnier has given his students an unusual assignment this fall: to design a nursing home. And not just any nursing home, but one that would be particularly suited to life in the next pandemic. The students were asked to approach the project, he says, with “COVID-19 sensitivity — what can I do to make this building safer or more COVID-resistant, whatever that entails?”

He gave the class a list of 135 suggestions, culled from his research, of what could be done to make a facility more, as he terms it, “future-proof.” The suggestions range from the commonplace (hand sanitizer dispensers near doorways and places where food is served) to the creative (designing wide, attractive stairways that encourage staff and visitors to take the stairs instead of the elevator) to the near-sci-fi (infrared cameras in the lobby to measure temperatures; food-delivering robots that look like domestic animals). Much of the list is devoted to items that encourage a structure of small clusters of eight to 10 residents, socially isolated from other clusters and from the outside world.

Most of the nursing homes in the United States were designed on models created in the 1950s, Regnier says. He encouraged students to look at so-called Green House models in the U.S., as well as typical nursing centers found in Northern European countries. The latter most often consist of small-scale units of around 400 square feet, with a private bedroom and bathroom for each resident. After their investigation, students were tasked with improving existing models to account for pandemic-driven requirements.

That’s a good idea, because pandemics are not going away, says Pinchas Cohen, dean of the USC Leonard Davis School of Gerontology. In a Zoom lecture he gave to Regnier’s students in September, Cohen said, “It’s predicted we are going to have more and more epidemics ahead of us. Designing with epidemics in mind is what you should expect to do in years to come.”

Almost half of all deaths from COVID-19 have been in nursing homes and senior housing, he reminded the students. And that makes it critically important to consider not only the structure’s design, but the protocols as well. So, yes to outdoor spaces and social distancing, but nursing homes should also consider how to keep residents as healthy as possible by having them exercise and serving them high-quality food. Homes should also invest in quality, consistent disease testing. “You have to include testing,” Cohen said, “for residents and for staff.”

Managing nursing home staff is particularly tricky in the time of COVID, experts agree. The expense of running these facilities means that as part of cost containment, staff members are often low-paid. As a result, nursing aides and staff often take jobs at two or three different homes, working double or triple shifts, six to seven days a week. As they move around, they can bring viruses with them.

“That’s very dangerous,” says Ed Schneider, professor of gerontology, medicine and biology and USC Leonard Davis dean emeritus. He advises nursing homes to do everything in their power to ensure that staff work only for their facility — for example, by awarding pay raises and asking employees to sign legal documents to that effect. Biggs tried some of these measures at the Carrington, but he found it difficult to identify staff who might accept the raise but then work a shift at another nursing home anyway. Instead, the facility invested in rigorous sanitation and distancing protocols, including extensive use of personal protective equipment. Over the summer, with those practices in place, 28 staff members tested positive for the virus, but not one of them transmitted their illness to a resident, Biggs says.

Josh Johnson MAG ’09, a USC lecturer and COO of West Bay Senior Living, says that none of the rural facilities he owns or manages has had a single case of COVID, in part because each is the only facility in its town, so staff members were not working at multiple jobs. The facilities also shut down quickly when the pandemic hit and worked hard to institute best practices. Now, some are able to partially loosen restrictions, such as allowing residents to enjoy socially distanced meals. “Investing in PPE is the most important thing that most facilities have learned,” Johnson says, “and the importance of protecting staff, and how to adapt if there is a crisis.”

Facilities and their leadership will need to continue to adapt and remain vigilant. Many people talk about waiting for a vaccine, Schneider says — but even when there is one, COVID won’t disappear overnight. “I don’t know what a postpandemic world will be like,” he says.

One of the reasons the pandemic did not make further inroads at the Carrington when it arrived in April, Biggs says, was because of a critical early investment in PPE — and because of his students at USC. Early on in the winter term, he says, “a lot of my students wanted to discuss this virus from China.” As he talked about it with them, it occurred to him that the Chinese factories that produced PPE might have to shut down due to the virus. So, sometime in late February or early March, Biggs says that Carrington “went on a buying binge,” snapping up as many masks and other items as the facility could manage to acquire. That equipment proved essential a few months later, when Carrington was able to snuff out its outbreak within weeks.

Still, watching staff members test positive in the summer, and after testing negative himself despite falling ill with COVID-like symptoms at the end of April, Biggs says he will never discount the ability of this virus to wreak havoc. “We still have a healthy respect for this virus,” he says. “We don’t declare it over.”

The stint at the Carrington was intended to be a yearlong return for Biggs to the front lines of senior living care; now, he is back in California as CEO of West Bay, which operates Carrington, and has stayed in touch with Carrington staff members. “There’s definitely a little patch that we all wear under the uniform, so to speak,” he says. “We were all there.”