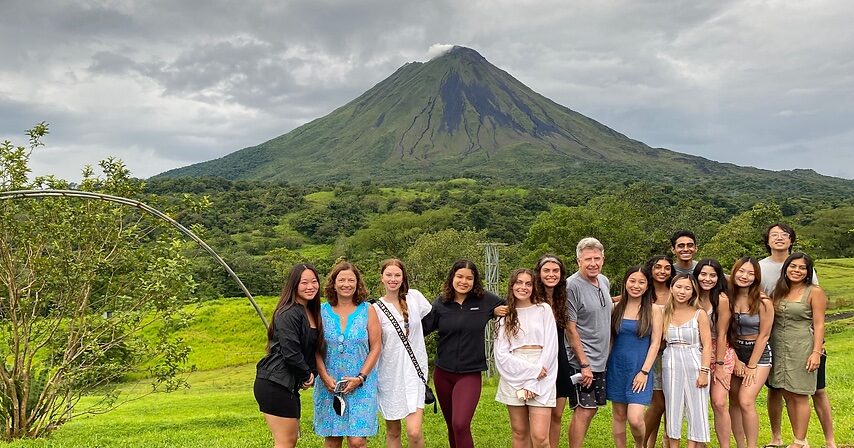 Kiana Hernandez ’22 kicked off her summer surfing in the ocean, practicing yoga on the beach, kayaking down a river, ziplining above forest trees, and enjoying fresh seafood meals.

But this was no vacation. Hernandez, who is now earning her master of science in gerontology, was a student in GERO 489: Finding the Key to a Long and Healthy Life in Nicoya, Costa Rica.

Led by Professors John and Julia Walsh, the class of 13 students traveled to Nicoya, Costa Rica to gain an on-the-ground understanding of why Costa Rica has one of the longest-lived populations in the world; despite being a poorer country overall, Costa Rican residents can expect to live almost two years longer than Americans in the United States.

Nicoya, a peninsula in the north-western part of the country, is one of the five original “Blue Zones,” a term popularized by author Dan Buettner to refer to regions of the world where people seem to live longer, healthier lives than average. In Nicoya’s case, the proportion of centenarians has been reported to be around three and a half times the global average.

“Students were able to downshift into that ‘Pura Vida’ mindset,” said John Walsh, the assistant dean of education and a professor at the USC Leonard Davis School. “They visited with the farmers who grew the fruits and coffee they ate and drank and connected to the local community and environment in a meaningful way.”

It also included surf lessons. The Nicoya region is famous for its waves, and John Walsh, an avid surfer, says the body movement and connection to nature the sport provides can improve both physical and mental health.

“I’ve been surfing since I was 10 and it’s exhausting, calming and beautiful all at the same time,” said Walsh. “I’m proud to say that 11 of our 13 students tried surfing in Costa Rica and they all learned to stand up on the board.”

At the conclusion of the course, students created a website and Instagram account showcasing their activities and lessons learned. For Hernandez, the most valuable take away was understanding the power of family connections.

“No one is ashamed to live in intergenerational homes and it is no wonder that children are very compassionate toward each other and other older adults,” she said. “This trip was a prime example of why Blue Zone communities are so important to study.”

One thought on “Surf, Sun, Support and Sustainability: Costa Rica Course Provides Lessons for a Long and Healthy Life”