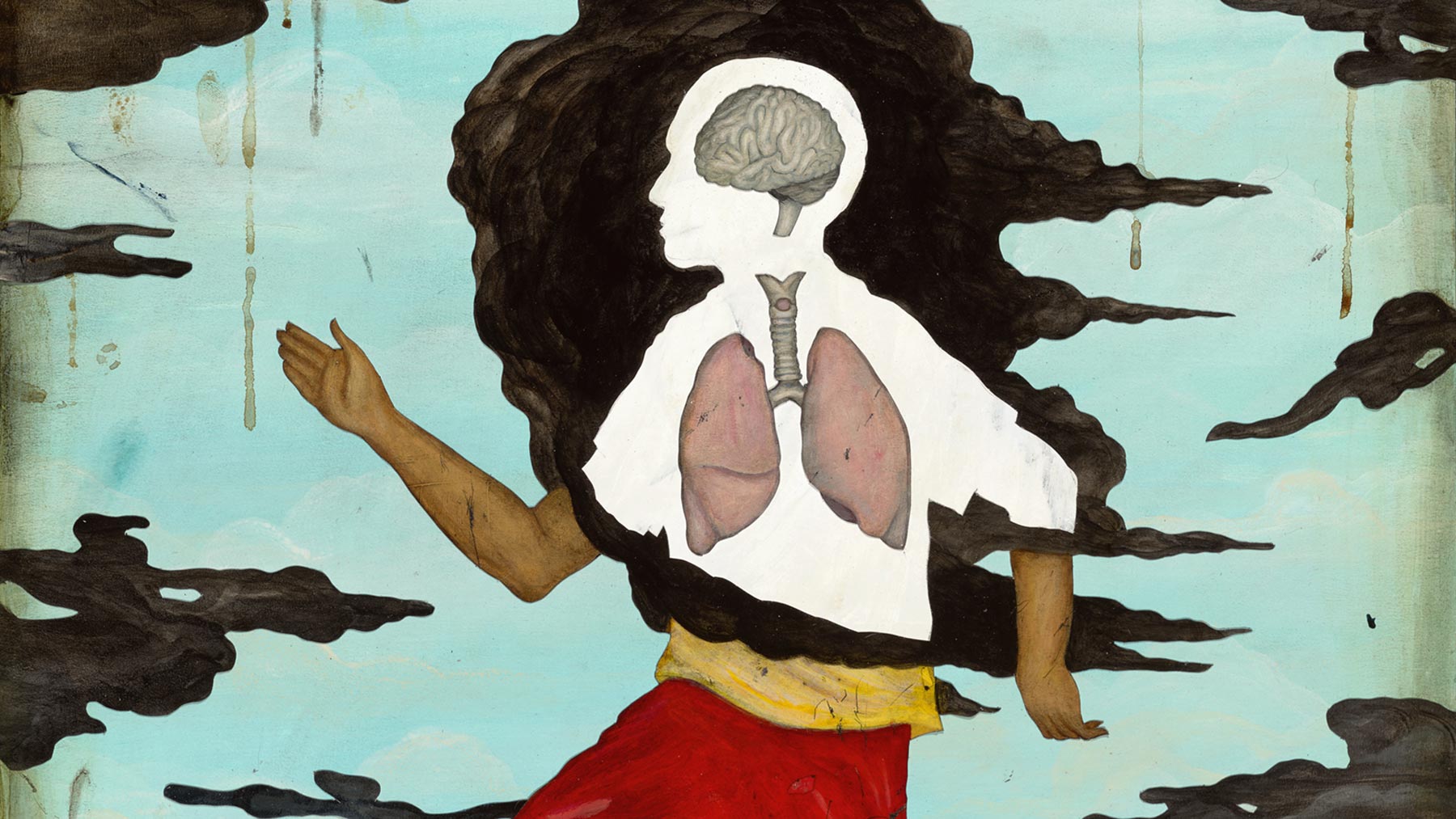 Your Brain on Air Pollution

Home » Your Brain on Air Pollution

Researchers across USC have joined forces to uncover the connection between the air we breathe and lifelong brain health.

Another blue-sky morning dawns in Southern California as Jennifer Ailshire wonders whether she should hop on her bike and explore the San Gabriel Mountain foothills. At her home in Glendale, the USC gerontologist and sociologist clicks on the Air Quality Index on her laptop before deciding it’s safe to ride.

About 35 miles south in Fullerton, Jiu-Chiuan Chen prepares for his daily run through his tree-lined neighborhood. When the USC physician and epidemiologist steps outside, he spots a gray-brown haze hugging the horizon. He checks the Air Quality Index on his phone and goes back inside.

In Culver City, Lauren Salminen considers the wisdom of hiking in the Santa Monica Mountains. She can see a misty scrim in the distance, but is that morning fog or smog? The USC neurology instructor decides this might be a day for yoga indoors.

These USC scientists—each an experienced researcher in brain aging—know that air pollution does more than ruin a good workout. Medical science has long recognized the impact of air pollution on the lungs, but now research at USC is helping define the environment’s impact on the brain. Growing evidence links the long-term effects of dirty air to accelerated cognitive decline and dementia.

USC researchers, including Chen, hope to better understand environmental effects and gene-environment interactions on brain health. “USC has the perfect soil to grow this new area of research,” he says.

The USC Children’s Health Study, launched in 1993 and now involving about 12,000 school-age children, is one of the nation’s largest and longest-running research projects on children’s respiratory health. Its researchers have contributed crucial data that have deepened understanding of lung health, including evidence that kids who live in more polluted areas have poorer lung function, reduced lung growth, and more asthma and lung damage than those in less-polluted areas.

When kids move away from polluted neighborhoods, their lung function improves, a discovery that has inspired other scientists to ask: If L.A.’s bad air is affecting our breathing, what about our brains?

What they’re finding is critical, including who is most at risk. “The aging brain is vulnerable to air pollution,” says Caleb Finch, a USC University Professor, gerontologist and expert on the biology of aging and also co-principal investigator in the AirPollBrain Group. “For too long, the role of environmental neurotoxins in Alzheimer’s disease has been neglected.”

Within a few years of joining forces, Chen and Finch reported the first evidence that a critical Alzheimer’s risk gene—APOE4—speeds brain aging when it interacts with fine air particles.

In 2011, the colleagues received the first-ever National Institutes of Health grant to study the connections between air pollution and Alzheimer’s. Since then, about one-fourth of the 220 NIH-funded research grants focused on air pollution and dementia have come to USC.

Finch and Chen have also succeeded in attracting more than two dozen USC scientists to the AirPollBrain Group, crossing disciplines and schools to unite neuroscientists, environmental health experts, engineers, gerontologists, physicians, sociologists and more. The result: In 2018, the National Institute on Aging awarded USC researchers a five-year $11.5 million grant to examine how urban air pollution contributes to an increased risk of dementia. 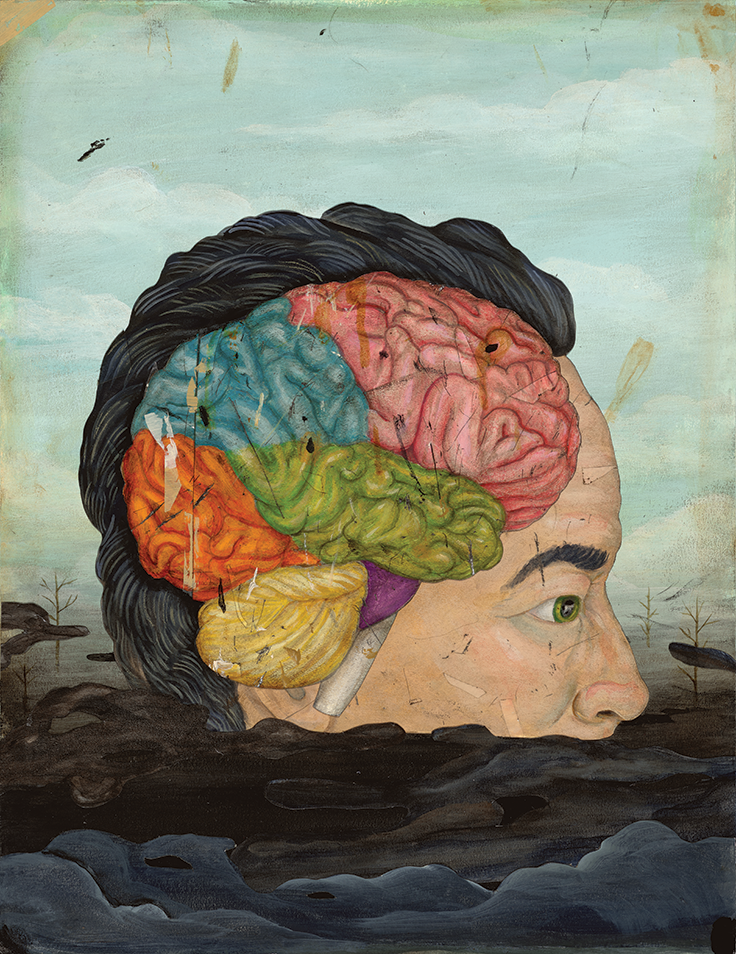 Air pollution wreaks havoc primarily through systemic inflammation, Finch says, and that exposure can lead to the formation of amyloid plaques, the proteins that form between the brain’s nerve cells that are the hallmarks of Alzheimer’s.

Researchers have fine particle pollution, also known as PM2.5, in their sights. The tiny, inhalable pollutants come from cars, power plants and coal and wood-burning fuel. Its name comes from its size—smaller than 2.5 microns in diameter or about 30 times smaller than the width of a human hair. But the impact, once inhaled, is huge.

The microscopic particles can pass directly through the nose into our lungs and may even slip through the blood-brain barrier, which is supposed to protect our brains from all invaders. “Pollution is breaking down our barriers,” says Megan Herting, a USC public health scientist whose lab uses advanced neuroimaging to study how the brain develops during childhood.

For reasons not yet fully understood, women in their 70s and 80s who live in areas with high levels of air pollution are at particular risk for Alzheimer’s-like brain shrinkage compared with women who routinely breathe cleaner air.

But kids aren’t immune. USC studies have shown that even at relatively low levels, toxic air may alter the size of a child’s developing brain and boost the risk of cognitive and emotional problems in adolescence.

How Bad is Our Air?

The Los Angeles-Long Beach region ranks first in the nation for ozone pollution and fourth in year-round fine particle pollution, according to the American Lung Association.

Pollution declines in the last 10 to 15 years nationally and in L.A. have been a public health success story. “It shows that if we put our minds to it, we can make our environment a healthier place to live,” Ailshire says. In 2021, she and Finch, her colleague in the USC Leonard Davis School of Gerontology, reported in separate studies that showed a decrease in neurotoxic PM2.5 air pollution in humans and in laboratory studies.

In the last few years, she has seen some backsliding to unhealthy levels. “We have to be constantly vigilant,” she says. “We can’t get ahead of ourselves and declare a victory.”

Ailshire is particularly interested in the “social ecology” of air pollution—the intersection of socioeconomic and physical risks—driven by the fact that polluted air tends to be worse in poorer neighborhoods. “Air pollution isn’t just a physical characteristic,” Ailshire says. “It’s a social phenomenon produced by humans, for the most part.”

Finch has been studying brain health for decades. In experimental studies, he and his team have shown that air pollution damages some parts of the brain that also are vulnerable to Alzheimer’s disease. Multiple factors influence the odds someone will develop Alzheimer’s disease. “There’s no silver bullet—it’s a machine gun,” Finch says. An individual’s risk can be a combination of several things, and air and chemical pollution are high on that list.

Tracking Pollution’s Impact Across the Lifespan 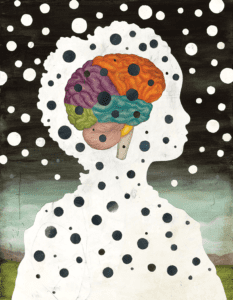 Within the Southern California Environmental Health Sciences Center at USC, program leaders Chen and Herting work at opposite ends of the age spectrum to pinpoint the environmental determinants of cognitive decline. Increasingly, evidence shows that older people are more likely to develop dementia if they live in places that have high PM2.5. Chen’s research has shown that women in their 70s and 80s are particularly vulnerable to structural changes in the brain and memory loss, for reasons not yet fully understood.

Chen also has found that PM2.5 particles are tied to the disproportionate number of Black Americans affected by dementia, partly because people of color are statistically more likely to live in neighborhoods near polluting facilities. Even when researchers accounted for the incidence of cardiovascular disease and other factors, Black women were twice as susceptible as non-Hispanic whites to dementia risk from air pollution. “That is a puzzle we still have to solve,” Chen says.

Air pollution also can affect children’s brain development. “One of the young brain’s most important jobs is creating efficient pathways,” Herting says. These pathways are critical because they form the essential brain circuitry that supports future learning and life skills. Lately, she’s focusing on kids 9 to 10, ages at which, she says, brain cells proliferate and prune themselves as kids head into adolescence. Herting’s team has demonstrated that kids exposed to noxious air have smaller areas in their brains associated with cognitive function and larger areas associated with emotion than kids breathing less-polluted air.

Her work is part of the national Adolescent Brain Cognitive Development Study, the largest investigation of its kind in the U.S. “We’re adding the environmental factor, one of the least-investigated areas,” she says.

To understand the bigger picture across the lifespan, Chen and Herting collaborated with Salminen, instructor of research neurology at the USC Mark and Mary Stevens Neuroimaging and Informatics Institute, to create the ENIGMA-ENV Working Group. “We know things like air pollution can increase dementia risk and vascular problems decades after exposure,” Salminen says. “But we have so much to learn about the processes that underlie those changes.”

Together, they are pooling brain scans from more than 60,000 people worldwide, who span all ages and range from healthy to those diagnosed with neurological disorders. The scientists rely on geospatial technology to map each participant’s home location and pollution exposure.

This global study builds on the success of ENIGMA Consortium, an international medical network of neuroimaging researchers studying major diseases of the brain, led by USC Stevens Associate Director Paul M. Thompson. “The ENIGMA-ENV Working Group is a truly global quest to identify environmental factors that help or harm our brain,” says Thompson, one of USC’s leading Alzheimer’s researchers. “Comparing data worldwide should reveal what factors help our brains develop and age, and what protects us against mental illness, which may ultimately guide public health policy.”

With this big-picture effort, USC is reaching beyond its Los Angeles roots to examine air pollution across all ages and sources. “We’re excited to be able to get more specific about what we mean when we say ‘air pollution,’” Salminen says.

Protecting Ourselves Now and Beyond

What can we do to protect our brain health? Moving away from highly polluted areas may be the ultimate protective strategy, but that option isn’t open to everyone. So USC scientists are on the hunt for other defenses.

In a study published in August 2020, Chen and his fellow authors looked at the protective powers of eating fish loaded with omega-3 fatty acids. “We found that women with higher blood levels of omega-3s had larger volumes of white matter in their brains,” he says—even women living in locations with higher PM2.5 levels. White matter, most of the brain’s volume, represents a vast system of neural connections. Its loss is considered an early marker of Alzheimer’s disease.

Next, Chen and Finch plan to expand their search for pollution counterbalances into supplements such as vitamins B, C and E. But they expect that any potential formula will not be one-size-fits-all.

The data generated at USC could have lasting implications for clean air standards and other regulations. Chen would like to see laws restricting placement of assisted living facilities near freeways much as is done now with schools. Herting wants air pollution facts to empower people to make their own decisions, “including who they want to elect to represent them on this life-critical issue,” she says.

She moved to Los Angeles from Oregon, where she was an avid runner. She’s mostly given that up. Before the birth of her daughter in December 2021, she was studying the locations of day care centers and schools in relation to L.A.’s byways.

When Finch arrived at USC in 1972, the federal Environmental Protection Agency was just 2 years old, and L.A. was infamous for its thick, hazy air. For decades, air quality officials warned the public to stay indoors on high smog days. Finch searched the L.A. Basin for a place with cleaner skies, eventually landing in northern Pasadena.

He lives there still and considers that health decision as important as the ones made about diet and exercise. When he drives, he keeps his car vents closed. A little self-protection goes a long way, he says, “but you can’t walk around the city with a scuba tank filled with oxygen on your back.”

In many ways, he’s optimistic about the future, inspired by the energetic brain-health collaborations at the university. “I could not imagine,” he says, “being able to do this kind of multidisciplinary work anyplace outside USC.”

This story first appeared in the spring 2022 issue of Trojan Family Magazine. Illustrations by Jason Holley.